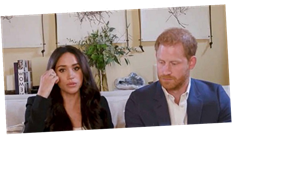 With much of the last year having been spent in our houses, a lot of us have been using the time to improve our homes.

Whether it has been following cleaning tips and tricks given by the likes of cleaning star Mrs Hinch, clearing out unwanted items inspired by Netflix's Marie Kondo or just rearranging furniture and decorating to better our surroundings.

It seems that this new hobby has also extended to the £14.7 million LA home of the Duke and Duchess of Sussex, who have also been restyling their living room often over the past year.

Meghan Markle and Prince Harry have appeared in a number of video interviews from their lavish living space, however it has never looked quite the same each time.

In recent footage, in which they hosted a special edition of TIME100 Talks on the topic of the 'state of our digital experience’, the royal couple's home appeared to have had a revamp.

As they sat on their comfy-looking beige sofa we could see that the sideboard behind has a large grey amethyst crystal on it, as well as a bunch of flowers in a tapering clear vase.

In front of the magnolia walls, which are adored with three similar artworks hanging in gilt frames, there is also a section of books which are stacked upright and some white candles.

However last week, when the happy couple appeared in a discussion with activist Malala Yousafzai, the space looked quite different.

The shelf behind had been moved, and some red flowers had been added and the stack of books were now placed on a small table which was situated at the end of the sofa.

However, back in September it was a different look again.

The sideboard was back and a much larger selection of books were stacked, but this time horizontally and there was an extra vase, as well as a Diptique candle.

On one end was a large bouquet of flowers, but this time in straight-edged ridged vase.

While all of these set ups look amazing, which one is your favourite?