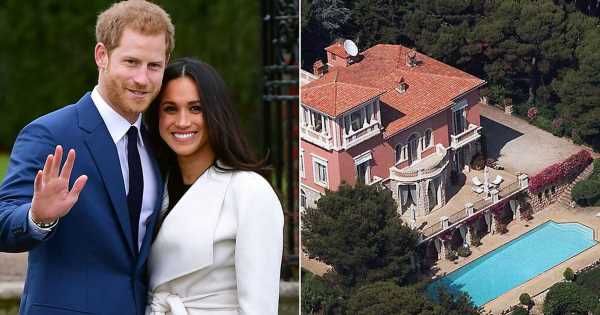 The Duke and Duchess of Sussex stayed in Elton John's luxury villa during their relaxing break in the French sunshine, according to reports.

Meghan, Harry and baby Archie travelled to Nice in yet another private plane on Saturday for a short trip, returning home today after a couple of nights away.

Elton's stunning French home, which is believed to be worth £15million, offers stunning views of the bay and up into the alps, reports the Sun .

Castel Mont-Alban was built in the 1920s and the pop star gave it a huge refurbishment after buying it, including several Andy Warhol pieces.

Unsurprisingly it's a big hit with Elton's celebrity pals, and the Beckhams reportedly love staying there.

Elton is friends with Meghan and Harry, and they recently walked the red carpet together at the Lion King premier in London.

He has also hosted a number of star-studded parties at the house over the years.

Meghan and Harry have been criticised for taking four private flights in just 11 days, despite regularly talking about environmental issues.

They've used their influence to call for action on climate change and further steps to protect the environment and wildlife.

But the eco-warriors have been branded hypocrites and urged to "lead by example" after jetting to Ibiza and Nice on luxury jets which have been condemned by environmentalists.

The 12-seat Cessna plane that flew the royals from Spain to the south of France last Wednesday belched seven times the emissions per person compared to a commercial flight, it is estimated.

The flight to Nice last Wednesday was Harry and Meghan's third private jet flight in just eight days and it came just weeks after the duke, who has vowed to cut the family's carbon footprint, used a private jet to fly to Sicily for a  Google  climate summit.

The Sussexes – who were accompanied by aides and security – frequently use their Instagram account to preach about environmentalism and conservation to their 9.3million followers.

Meghan wore a white blouse and cream sun hat as she carried three-month-old Archie, clad in a cream and navy striped jumper, off the plane in Nice.

Harry, dressed in a green polo shirt, blue hat and sunglasses, was also pictured walking off the £15million Cessna Citation Sovereign, which is registered to NetJets, a firm dubbed 'Uber for billionaires' thanks to its wealthy clientele.

Experts say it would have cost about £20,000 for a return flight. It was not known who paid for the flights.

The royals' luggage was loaded into a vehicle and they were driven away from the airport as their second Mediterranean holiday of the summer got under way.

The family landed in Nice two days after flying to the UK from Ibiza, where they reportedly stayed in a luxury resort for the rich and famous  that costs up to £120,000 a week.

They reportedly spent six days on the Spanish island to celebrate Meghan’s 38th birthday. It was Archie's first holiday abroad.

It is thought they spent two nights back at home at  Frogmore Cottage  before flying to Nice.

Flight data showed the plane leaving the airport in Nice and returning to Farnborough on Saturday.

Labour MP Teresa Pearce told the  Sun:  “Given the position they have taken publicly about being responsible on climate change, this does seem an anomaly which they should look at.