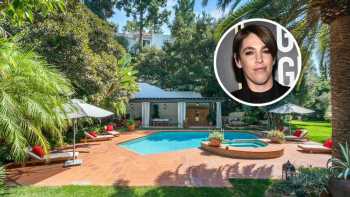 An historic, showbiz-pedigreed estate nestled up against Griffith Park in L.A.’s Los Feliz area, owned by Megan Ellison, has popped up for sale at $8.5 million. The powerhouse film producer, whose once high-flying Annapurna Pictures staved off bankruptcy earlier this year with a last-minute restructuring of $200 million in debt, acquired the Spanish-style spread just over a year ago, in June 2018, in an all-cash deal valued at $7.75 million. The sellers were a not-famous couple who picked up the property in the fall of 2014 for exactly $6 million from Michael “Flea” Balzary of the Red Hot Chile Peppers and well-informed word on the celebrity real estate street is, though she poured some money into a variety of renovations and improvements, Ellison never occupied the property as a private residence.

Completely obscured behind a high wall and a thick forest of pine, redwood and olive trees, the hillside property spans just over three-quarters of an acre. Originally built in the mid-1920s, the property is widely known in real estate and architectural circles as the Van Griffith Estate, after its original owner, the son of unusually named Griffith Park founder Griffith J. Griffith. All together there are six bedrooms and four full and three half bathrooms between the main house and sprawling poolside guesthouse.

Gated and tree-shaded, the elegantly long driveway makes a sinuous swoop past the guesthouse and swimming pool up to the relatively humble, unprepossessing front of the two-story white stucco main residence. Generous entertaining spaces include a cavernous living room with a fireplace, barrel vaulted ceiling and views of the downtown skyline through huge windows. A separate formal dining room is juiced up with a multi-colored vintage light fixture and a spacious eat-in kitchen sports premium-grade up-to-date appliances and a butcher block topped doublewide center island under a massive skylight. Guest bedrooms feature custom built-ins, while guest bathrooms have undergone sleek and expensive updates devoid of any original architectural detailing The master suite is composed of a huge bedroom with sitting area and carved wood fireplace, a cedar-lined walk-in closet and a roomy bathroom with over-sized and decidedly contemporary glassed-in shower.

Just inside the gated entry and a considerable, thigh-straining hike down the hill from the main house, the two-bedroom and two-plus bathroom guesthouse’s living/dining room features polished terra-cotta floor tiles, a beamed and vaulted exposed wood ceiling and a huge fireplace. French doors open the room to the resort-style swimming pool swimming pool. A small kitchen has high-end appliances and a library/den with built-in bookshelves has a large skylight.

Around the swimming pool are a trellis-covered lounge with outdoor fireplace, a dining loggia for al fresco poolside meals and a sweep of sun-dappled lawn. A large roof terrace atop the main house offers a curtained lounge area with retractable sun shades and up-close views of the Griffith Park Observatory and more distant views of the downtown skyline.

The listing is held by Lisa Brende and Chris Corkum of Compass.

The deep-pocketed real estate aficionado and software heiress, whose Oracle-founding, money-is-no-object father Larry Ellison presides over a fortune in excess of $65 billion, is well known in property gossip circles for her curious penchant for purchasing two and sometimes three neighboring homes. At one point she owned three ultra-modern pavilions lined up in a row along a high ridge in the Bird Streets ‘hood above the Sunset Strip that were sold off in 2013 for a combined $47 million and she later owned two neighboring homes atop the Hollywood Hills’ Mount Olympus neighborhood that were sold in two unrelated 2017 transactions that totaled about $40 million. One of the Bird Streets homes was purchased for $20.5 million by Texas-based billionaire computer tycoon Ted Waitt, who promptly tore down the existing residence and built a bigger one, and the smaller of the Mount Olympus properties, bought by Ellison in early 2015 for $5.25 million, was sold off at a huge loss in late 2017 for just over $4 million to rock ‘n’ roll scion turned “accountability coach and fitness influencer” turned “The Real Housewives of Beverly Hills” cast member Teddi Mellencamp Arroyave and security expert Edwin Arroyave.

Ellison’s current holdings include two neighboring homes in the prestigious, lower Benedict Canyon area of Beverly Hills that she acquired a couple of years ago in two transactions several months apart for a combined total of not quite $22.4 million. She bought the first property, a one-plus acre, multi-structure compound hidden down a long, gated drive, in late 2016 for $15.5 million from Oscar winning cinematographer Janusz Kaminski and several months later, in early 2017, shelled out almost $6.9 million for the 4,200 square foot mid-century modern residence next door. She quickly flipped the second residence back on the market in mid-2018 at $7.5 million and the price dropped to just under $6.4 million before it was taken off the open market in the first days of 2019. Ellison also keeps a pair of quirky co-operative units in an artsy, early 20th century Beaux-Art-style building in downtown Manhattan, the larger of the two, with a dome ceilinged circular living room, scooped up over the summer of 2013 for $2.9 million.