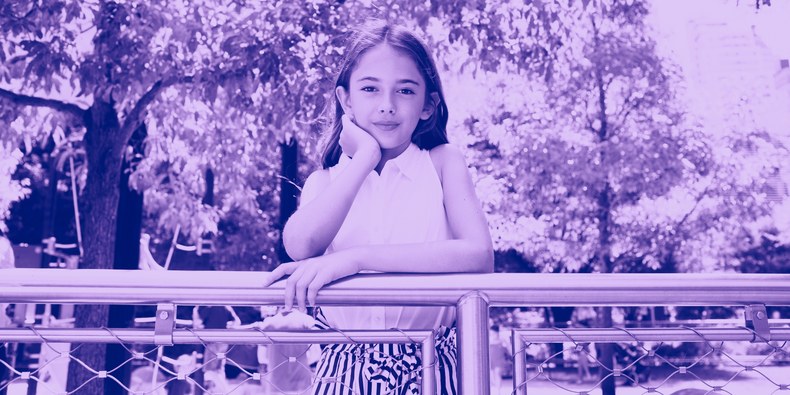 It's a hot summer day in New York City, and sitting on a park bench at a downtown playground, something has caught Julia Butters's eye. "That's the most New York thing I've ever seen: two toddlers chasing a pigeon," she says, pointing at exactly that. It's a wry observation, made all the more amusing when you consider the fact that it's coming from someone who only celebrated her tenth birthday a few months ago. World, meet Julia Butters: the scene-stealing new star of Quentin Tarantino's Once Upon A Time In Hollywood.

While the idea of going head-to-head with Leonardo DiCaprio—in a Tarantino film, no less—would be daunting for most actors two (or three, or four) times her age, Butters had no problem rising to the occasion for her role as a precocious child star filming a show opposite DiCaprio's Rick Dalton. It helped that Butters had no clue who DiCaprio was. " I had no idea what Leo or Brad looked like," she said. "I thought Brad was a musician." In the end, it made for a memorable role in the star-packed film. Here, an impossibly charming interview with the young star.

Where are you from?

Los Angeles. I've actually never lived anywhere else. Disneyland is a big, amazing bonus. But it's not just about the theme parks. The weather sometimes is very bad, but sometimes it's very good. They think we go to the beach all the time every day, but I haven't been to a beach in so many years. It's crazy.

How did you start acting?

I got started acting when I was about four. We had a neighbor who was an acting coach. First, I started out with baby modeling because I was such a shy baby. You'd never believe it. We decided modeling might help and I loved it. At toddler age I started doing commercials and I loved it so much that my mom's friend wrote me into Criminal Minds. I've loved it ever since.

What about acting do you love so much?

I really like meeting new friends. I like being able to play a character. It's a nice challenge to be somebody else.

A lot of them are just normal kids. You know, there's been auditions where it's a harder kid. Probably a child with an obsessive compulsive disorder. She had that at the beginning of the show that I'm on, and it just faded away. But that was hard. The script was so good that it helped a lot and told me all the information I needed.

I get anxiety really easily. Funny story—when I did the Tarantino film, I was so nervous, but I didn't know who he was. I thought he was one of those new-to-the industry directors. Anyways, I found this pack of cards in my mom's purse and I pretended to do a magic trick and it actually worked. I made up the magic trick. I have no idea why, but it happened. I could have totally messed that up.

How did you react when you got the part?

I was excited. And then he said, "We're filming at the Universal Studios backlot." I fell out of my chair. I was so excited. I was in shock. I've always wanted to film at Universal Studios. We totally could have gone to the park afterwards, but it was just too hot and we were too tired and we wanted to go home and think about our day of meeting Steven Spielberg. Hint, hint.

Well, tell me about that.

I'm pretty sure that they are buddies. You know, one director knows another. Before I even met him or shook his hand, we had seen him just walking around on set. We were driving home from rehearsals and saw him in the valet parking lot. He was walking to his car on the phone—I actually have a picture, like he's Bigfoot. He had a vest and this cashmere—of course—sweater and jeans. I'm like, "Dude, I'm in a tank top and shorts getting sweaty." He waved hi to me and I was freaking out. Then we met him the next day. I heard his name like, "Spielberg almost got kicked out of set for having his phone in his pocket." And then, out of a cloud of dust, I went over there and said, "Hi, I'm Julia." I think my insides fainted.

How was meeting your co-stars?

I met them at the table read. Here's a funny story: before the audition, I had to tell my tutor that I was going in. And he said, "You know, Leonardo DiCaprio and Brad Pitt are there, no pressure." I was like, "I don't know who they are." I've heard, of course, the name Brad Pitt. I had no idea what Leo or Brad looked like. i thought Brad was a musician. "Hey, can I get some violin tips?"

The table read was fun and humiliating. I was sitting in one of those fold out wedding chairs. My little curious self—this was the last thing I saw before I got humiliated—I saw the armrest touching the side of the table. And bang, I was face-planted under the table. Leo was next to me, and he picked up the chair and sat me back down and went back to the script. What a good first impression on meeting Margot Robbie, eh?

How was meeting Margot Robbie otherwise?

She is so beautiful. Honestly, she is so symmetrical. Like, wow. She's really pretty. But she's also really nice and really smart. She's a great person, in general. Sadly, I didn't have any scenes with her, but I got to talk to her at the wrap party and table read.

How was filming your scenes with Leo?

It was great. He is one of those, "Got to stay quiet so I can stay in my character" types. But he was always starting conversations. I was the one in the corner trying to sort out my life. And he'd be like, "So, how are you?"

What's the biggest piece of advice that Quentin gave you?

So many. It's hard to count. He really was a mentor. I looked up to him and he looked down to me—no, I'm kidding. He's one of those humble guys, but a humble guy who likes compliments. Flattery will get you anywhere in life. He really gave me tips for shots, because I make my own movies. He gave me ideas.

Do you want to be a director?

Yes. After meeting him, yeah. He's a really great person.

Have you seen any of the film yet?

I've seen most of it. The one thing I couldn't watch was the end. That's a Tarantino film for you.

Now that you've worked with all of these amazing people, who do you hope is next?

Will Ferrell. A lot of the comedy people are my idols. I really like Kristen Wiig—comedy; I like Bill Murray—comedy; I like Jim Carrey—comedy and drama.