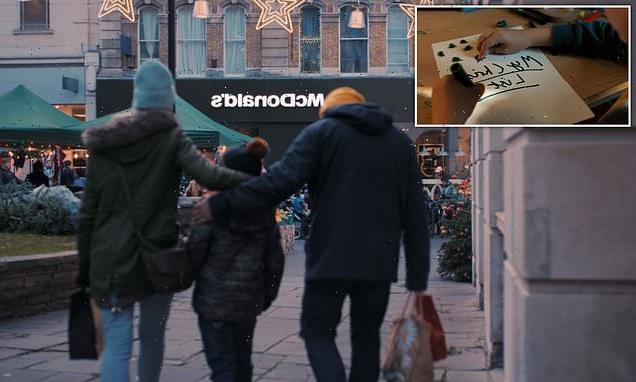 As the major retailers have been releasing their festive adverts in the run up to Christmas, McDonald’s has rolled out their own very poignant spot.

Called ‘The List’ and created by Tom Hopper, who directed the King’s Speech, the 90-second-long ad aims to show that it’s the little things that count, and is set to a heart-warming cover of Yazoo’s ‘Only You’ by Becky Hill.

The spot, which will premiere during ITV’s I’m a Celeb on Sunday, follows a boy named Alfie who spends night and days coming up with a list of all the things he wants for Christmas.

The boy loses the list, but his parents take him to McDonald’s to cheer him up, after which he reveals that what he most wishes for for Christmas is spending time at home with them. 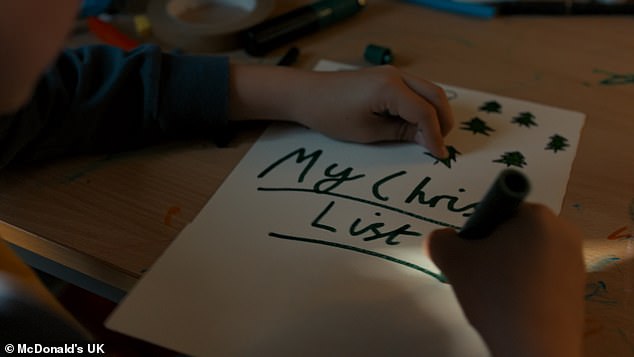 McDonald’s UK have rolled out a very poignant Christmas advert today, which follows a boy coming up with a list of what he wants for Christmas, aiming to show that it’s the little things that count 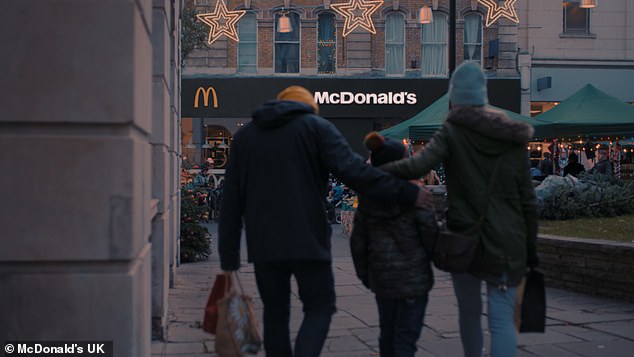 A boy loses the Christmas lists he’s spent weeks working on, but his parents take him to McDonald’s to cheer him up, after which he reveals that what he most wishes for for Christmas is spending time at home with them

The boy’s mother gives him the idea to come up with a list, and he is seen taking the task very seriously, decorating it with glitter, pens of different colours and garlands.

The list gets longer and longer as time passes, and the boy takes it with him everywhere, even when he visits his grandmother.

But one day, while he is out and about with his parents, and wondering how to get his list to Santa, it gets swept away by a strong gust of wind and disappears in the sky.

The little boy is upset, and his parents rush to comfort him and take him to McDonald’s to cheer him up. 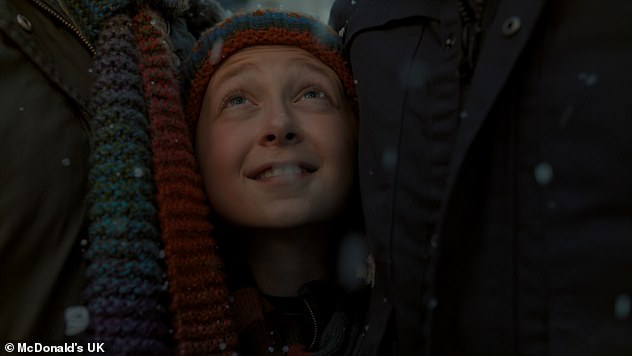 The boy is sad to lose his list, but immediately comforted by the presence of his doting parents

There, he enjoys a Happy Meal while chatting and laughing with his parents.

As the family exists the restaurant, his mothers asks him: ‘what was on your list anyway?’

The boy looks down before replying and sees that the only piece from the list he was able to save was a drawing of a house.

It shows that Alfie had not been making a list of presents, but a list of things he wanted to do with his family.

10p of every download of Becky Hill’s version of the song will also be going to Children in Need. 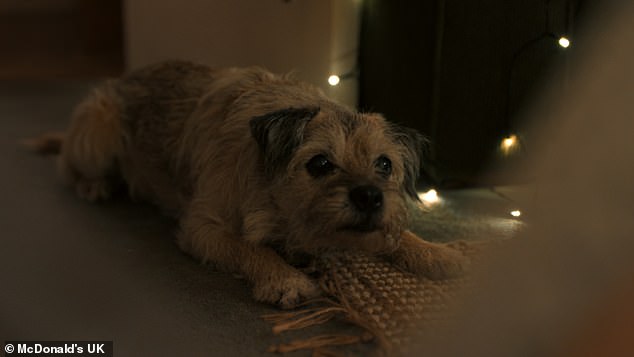 The advert is debuting alongside McDonald’s Alternative Christmas List, which will be available on the restaurant’s app and offers several experiences to families around the UK, starting from 14 November.

On the Christmas campaign, Michelle Graham-Clare, Senior Vice President and  Chief Marketing Officer at McDonald’s UK said: ‘We know this Christmas isn’t going to be a normal one for many families across the UK and Ireland, so it’s more important than ever that we’re there to support our customers in their preparations to get Reindeer Ready.

‘We’re proud to launch The Alternative Christmas List, which will provide many families across the UK with free, fun activities in the lead-up to the big day, but to also be supporting our charity partner BBC Children in Need with much-needed funds at a time when they need it most.’

Becky Hill, who sings the cover airing in the song, said:  ‘I am so pleased to working with McDonald’s once again for this year’s Christmas campaign.

‘This year in particular so many families and young people are struggling with the cost of living & I’m so glad that 10p from every download is donated directly to BBC Children in Need,’ she said.

‘It’s humbling to see the work that this fantastic charity does and I’m proud to play my part in supporting the young people it helps,’ she added.