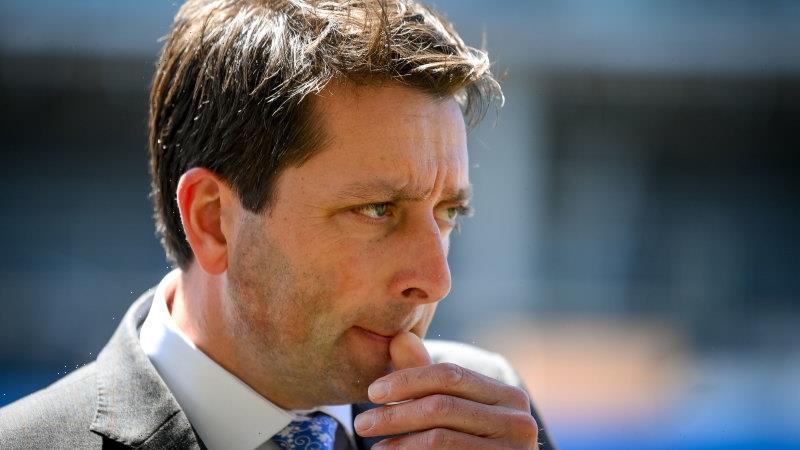 Tim Smith and Matthew Guy have fallen out, with the Opposition Leader receiving a series of terse text messages from his former ally after the Kew MP bowed to a week of pressure over his drunken car crash and announced that he would not stand at next year’s state election.

The cooling of relations between the pair comes as Liberal frontbencher and Brighton MP James Newbury – who along with Mr Smith was integral to Mr Guy’s leadership comeback in September – faces a preselection challenge from two Liberal women. 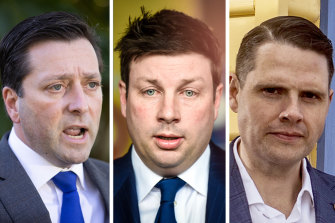 Matthew Guy and Tim Smith have fallen out, and James Newbury (right) is facing a preselection challenge. Credit:The Age

Mr Smith and Mr Guy have not spoken in days, multiple Liberal sources have confirmed to The Age, after Mr Smith sent text messages to Mr Guy that were described by a party source as “direct” and “firm”.

The text messages from Mr Smith related to the differing versions of events presented by the two men last week. Mr Guy repeatedly insisted that he told Mr Smith not to contest the next election, but Mr Smith declined to confirm Mr Guy’s version of their conversations, instead telling journalists that “recollections may differ”.

Three Liberal MPs confirmed Mr Smith has ceased regular contact with former allies, including Mr Guy, in recent days. “He’s not talking to any of us,” one Liberal frontbencher said.

Mr Newbury, the opposition spokesman for economic development and equality faces a fight to hold on to his affluent but ultra-marginal electorate, with former Bayside mayor and local football league director Felicity Frederico challenging the MP and Bayside Forum director Colleen Harkin weighing up a tilt.

In Mr Smith’s seat, a crowded field of preselection hopefuls has been joined by Virginia Wallace, a lawyer, director of Tennis Victoria, board member of two water catchment authorities, former chief of staff to a federal minister and a former employee of NAB, AMP and BHP.

Mr Newbury has enlisted the support of former premier Jeff Kennett and shadow treasurer David Davis, while Ms Frederico was supported by former prime minister Tony Abbott when she unsuccessfully ran in the preselection won by Mr Newbury in 2018.

Ms Frederico is backed by former upper house MP Margaret Fitzherbert, who was also a candidate in the Brighton preselection before the 2018 election. Former federal minister Andrew Robb and multiple members of the party’s administrative committee also support her run.

Mr Newbury, who has recently been fighting more conservative elements of his party over gay conversion laws, has recently embarked on a recruitment drive in his local party branches, increasing membership from 220 to about 300. 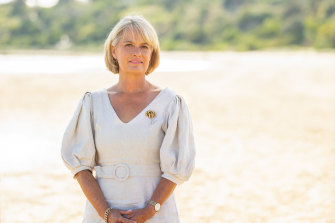 Mr Kennett wrote in a letter to Brighton party members that Mr Newbury would be an “important cog and hopefully minister” in a future Liberal government. “I have obviously watched James’ contribution maturing over the years … James has been learning well, to the point now where he is ready for higher office.”

Before his preselection, Mr Newbury was a federal Liberal adviser who fell foul of Mr Abbott and his then chief of staff Peta Credlin after he openly criticised the way they were running the party.

In a candidate statement provided to her supporters, Ms Frederico said the party lost more primary votes in Brighton at the 2018 election – when the Liberals lost 10 per cent of the vote and won on a margin of about 1 per cent – than any other seat.

“[There is] a genuine concern … from senior party officials and members that the Liberal Party will lose the seat of Brighton if we continue with the current representation,” she wrote.

“The community does not want a plethora of male career politicians. The community wants representation they can trust with candidates who have real life experience and a proven track record.”

After days of holding firm and declining to leave Parliament, Mr Smith announced he would not contest the election and there is a chance that he might quit before next November, paving the way for a byelection that would represent a highly anticipated test of the government’s mid-term support. It would also reveal whether the Liberal Party’s fortunes have shifted in the affluent eastern suburbs where they lost support in the 2018 election.

Sitting MPs have until midday on Friday to decide whether they will stand at the election, which will be on November 26 next year.

Lower house veterans Kim Wells, Neil Angus and David Morris are set to contest the 2022 election. However, Gary Blackwood will retire and Neale Burgess is likely to quit, according to a senior Liberal Party source.

Mr Blackwood has announced he will step down as the member for Narracan after 16 years in State Parliament. Dr Renee Heath, a member of the Liberal Party’s administrative committee, is being touted as a potential candidate after missing out on the upper house seat of Eastern Victoria last weekend.

A self-described “next-generation Liberal”, Dr Heath is a member of the conservative City Builders Church and is believed to be keen to reposition herself amid claims her links to the controversial congregation were weaponised against her in the Eastern Victoria preselection.

Upper house candidates won’t be finalised until 2022, but long-serving Liberals Gordon Rich-Phillips and Bernie Finn are both expected to be challenged.