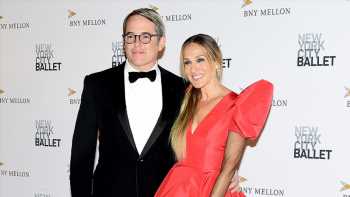 The staging will mark the Broadway directorial debut of Tony award-winner John Benjamin Hickey. Set in New York City’s Plaza Hotel in Suite 719, “Plaza Suite” is comprised of three one-acts involving three couples, which will all be played by Broderick and Parker.

“Plaza Suite” will premiere at Boston’s Emerson Colonial Theatre, where it first debuted in 1968. It will run from Feb. 5-22, 2020 before hitting Broadway’s Hudson Theater in April 2020, where it will run for 17 weeks.

Parker and Broderick previously worked together on the 1995 Broadway revival of “How to Succeed in Business Without Really Trying,” which earned the former a Tony award. The couple also both starred in A.R. Gurney’s “Sylvia” — Parker in 1995 and Broderick in 2015.

Broderick worked with Simon before on the 1983 play “Brighton Beach Memoirs,” for which he earned a Tony award. He also starred in Simon’s “Biloxi Blues” in 1985 and a revival of “The Odd Couple” with Nathan Lane. Parker first appeared on Broadway at the age of 11 in “The Innocents,” played the lead role in “Annie,” and starred in Broadway’s 1996 production of “Once Upon a Mattress” along with “The Commons of Pensacola” off-Broadway.

“Plaza Suite” is produced by the Ambassador Theater Group, Galvin Kalin Productions and Hal Luftig. Previews at Hudson Theater will begin March 13 and opening night is set for April 13.