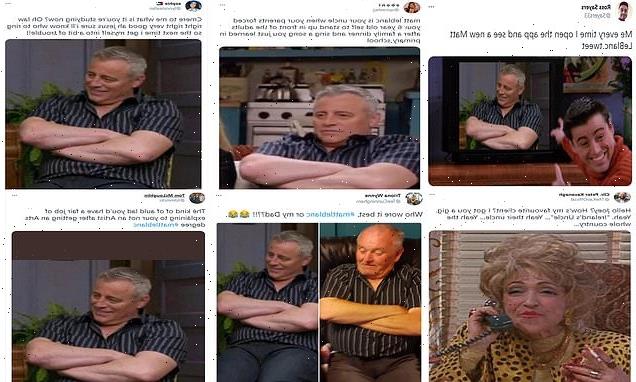 How YOU getting on? Matt LeBlanc is likened to ‘everyone’s Da’ after photos ‘looking like an Irish uncle’ from Friends reunion go viral

Millions of viewers across the world tuned into the Friends reunion last week, 17 years after the final episode of the sitcom aired.

And while fans were thrilled to see the six stars back together as they reminisced and told stories from the set, one of the actors particularly caught the eye of Twitter, with Matt LeBlanc becoming a viral sensation after many  said he looked like an ‘Irish Da’ or uncle.

Known for playing Italian-American ladies’ man Joey Tribbiani, 53-year-old LeBlanc, who is American of Italian and French descent, caused a sensation thanks to his grey hair, black striped shirt, sitting pose, and curious expression – which many Irish people said reminded them of older gentleman in their life.

‘The rest of the world should know that for the last 24 hours Irish Twitter has become OBSESSSED with how much Matt Le Blanc looks like everyone’s uncle/cousin,’ comedian Dara Ó Briain tweeted.

Derry Girls and Bridgerton star Nicola Coughlan added: ‘Matt LeBlanc is Irish, I don’t want to see any other nation trying to claim him, he’s from Tullamore, he drinks milk with his dinner’.

Explaining the meme, one Twitter user wrote: ‘ It’s like he’s the classic slightly ~behind the times but ultimately wholesome and well intentioned older country man you get stuck chatting to at a family wedding. He’s a bit cheeky but like…..in a nice dad way.

Another added: ‘He looks like the Irish Uncle with a heart of gold. He’s behind the times, rough round the edges, loves life, his family, his cattle and you, hugs like a bear, drinks like a fish, talks the hind legs off a donkey and punched that guy in the gob who sl****d off your gay partner ‘ 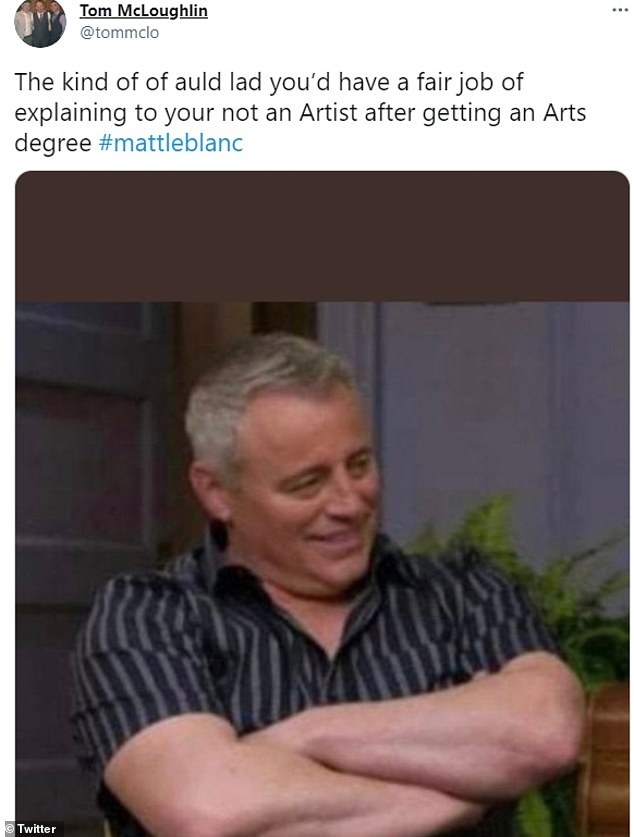 Known for playing ladies’ man Joey Tribbiani, LeBlanc, 53, caused a sensation thanks to his grey hair, black striped shirt, sitting pose, and curious expression – which many Irish people said reminded them of older gentleman in their life. 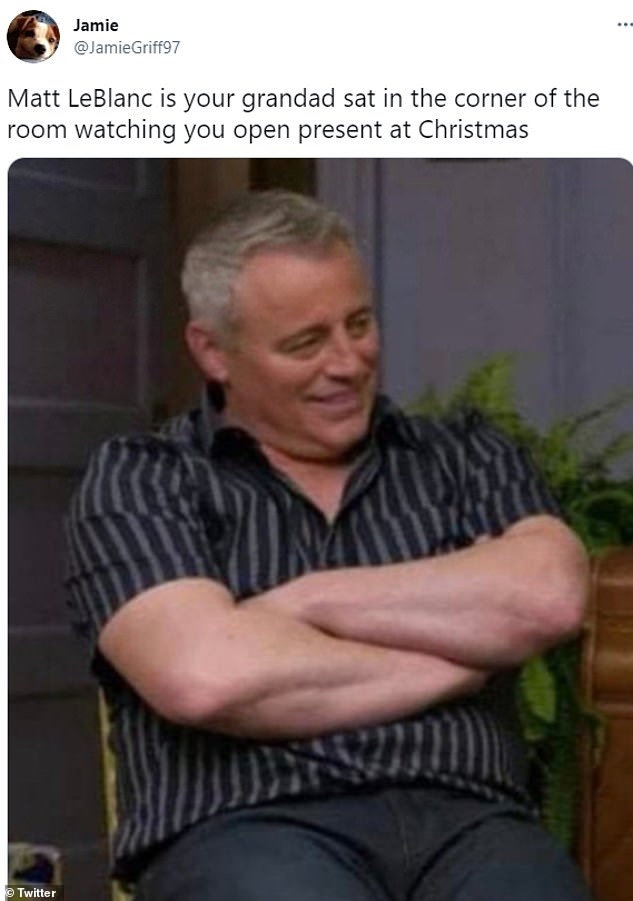 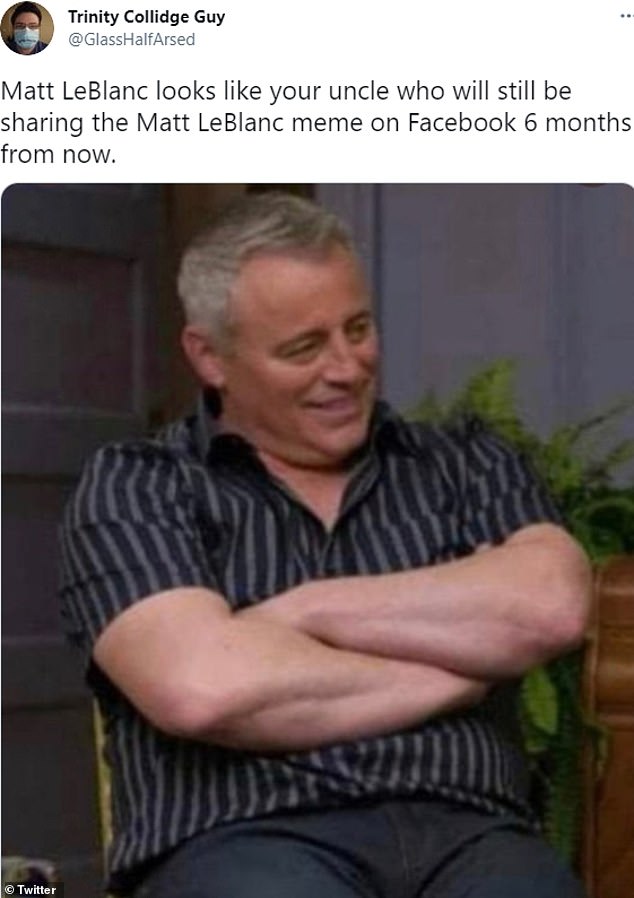 Memeception! Another joked that LeBlanc looked like the type of person who would ‘share his meme’ in six months 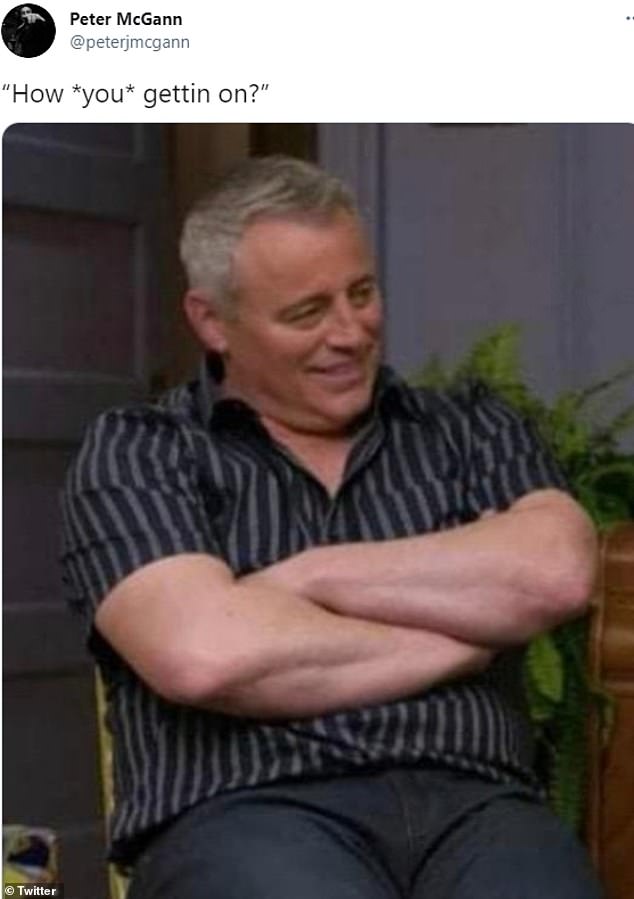 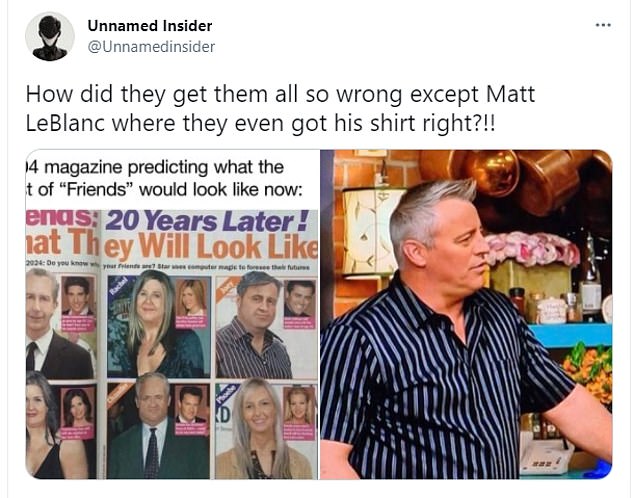 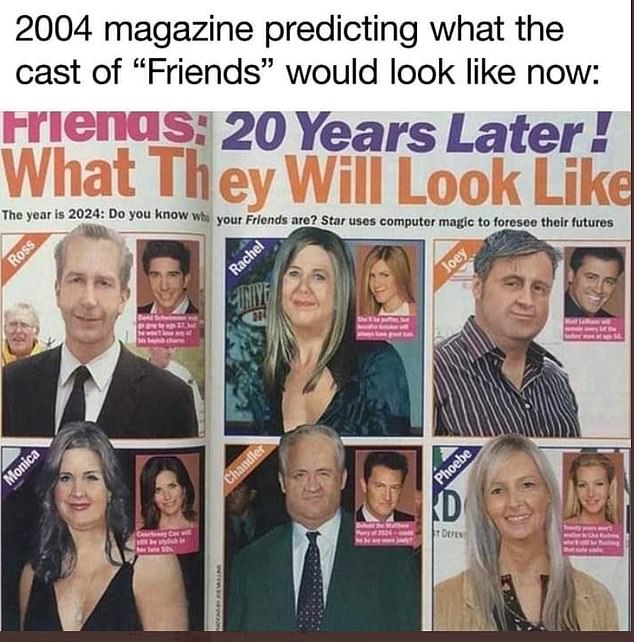 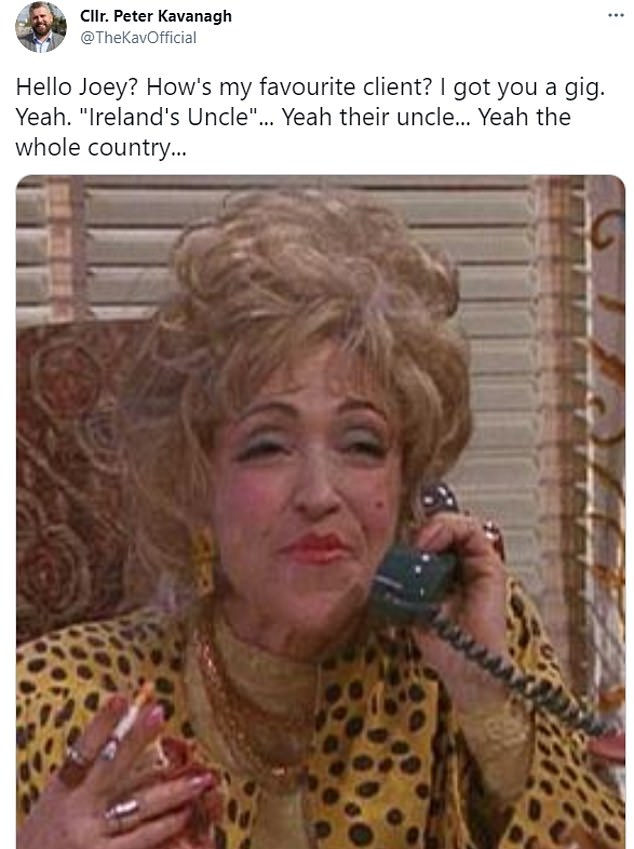 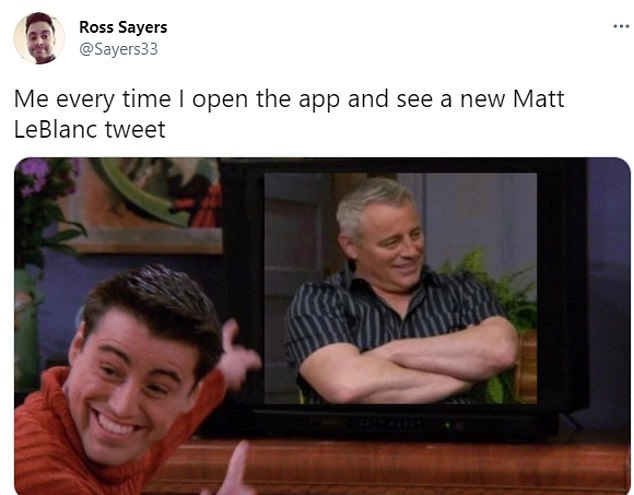 Meme on meme! Another shared snap of the meme of Joey looking at himself and inserting the new picture 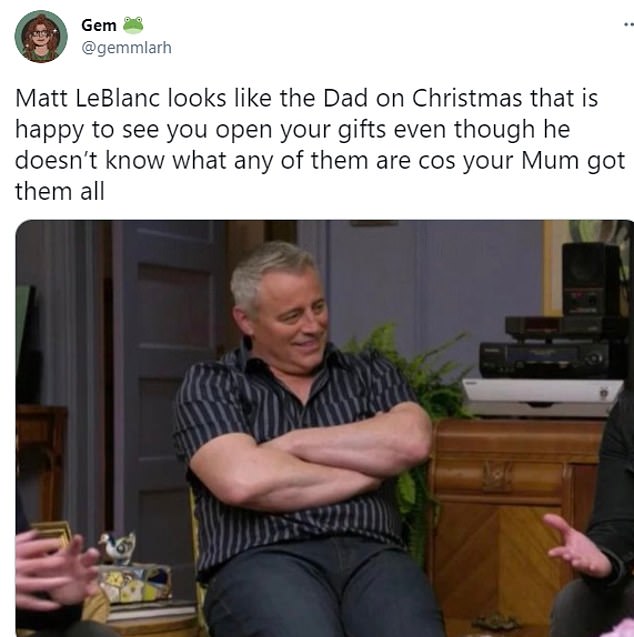 Classic Dad behaviour! Another joked that LeBlanc looked like a Dad watching kids opening Christmas presents but is surprised as his wife bought them all 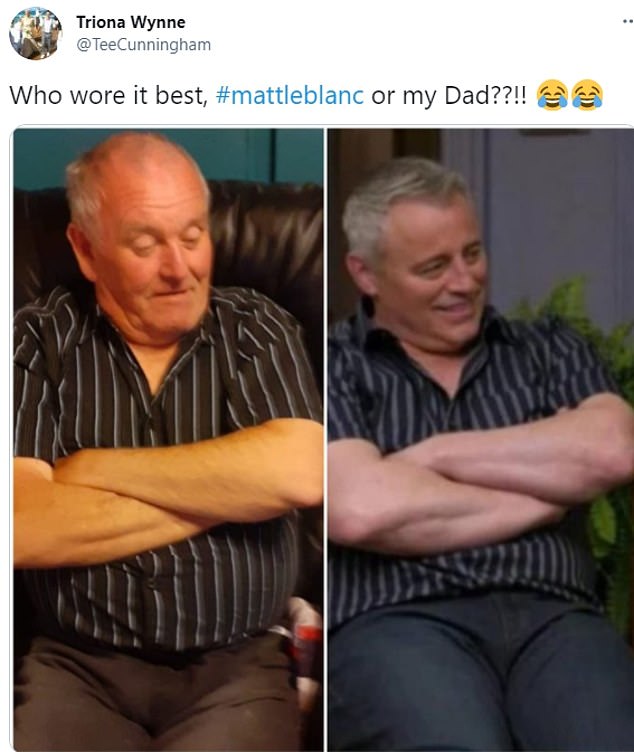 A real life Da! Another shared a snap saying ‘who wore it best, Joey or my Dad,’ which racked up hundreds of likes 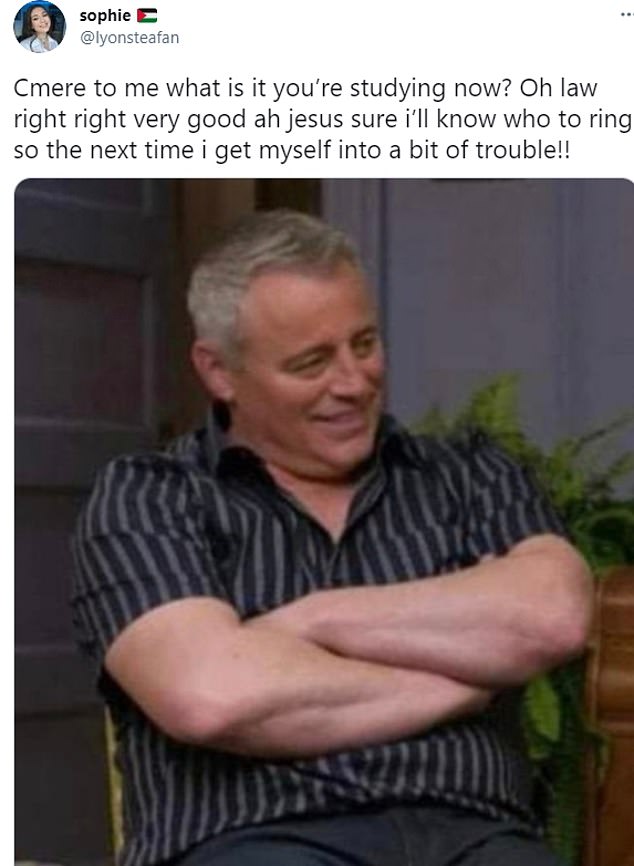 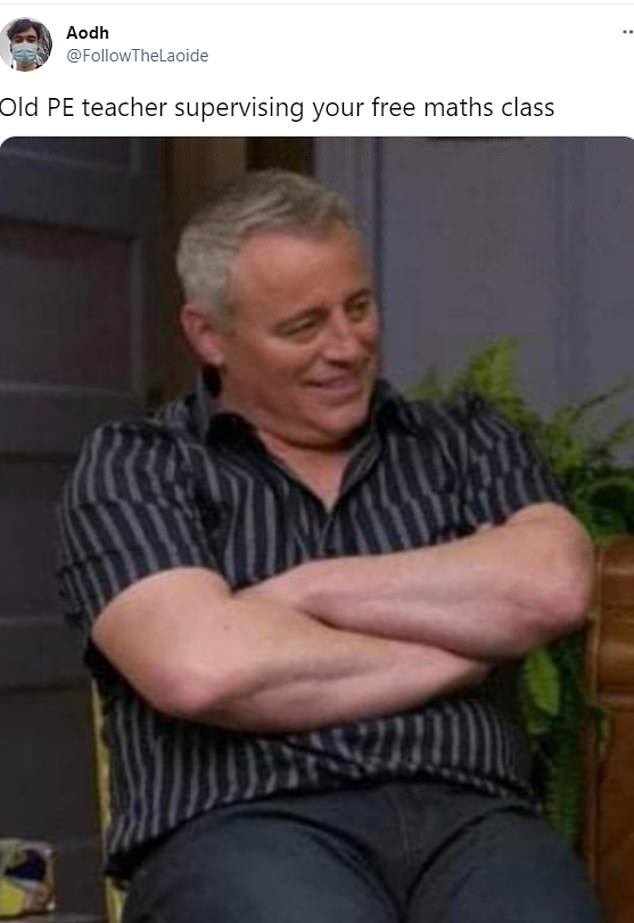 Mr Tribanni! Another joked that LeBlanc looked like the PE teacher who had to supervise maths class 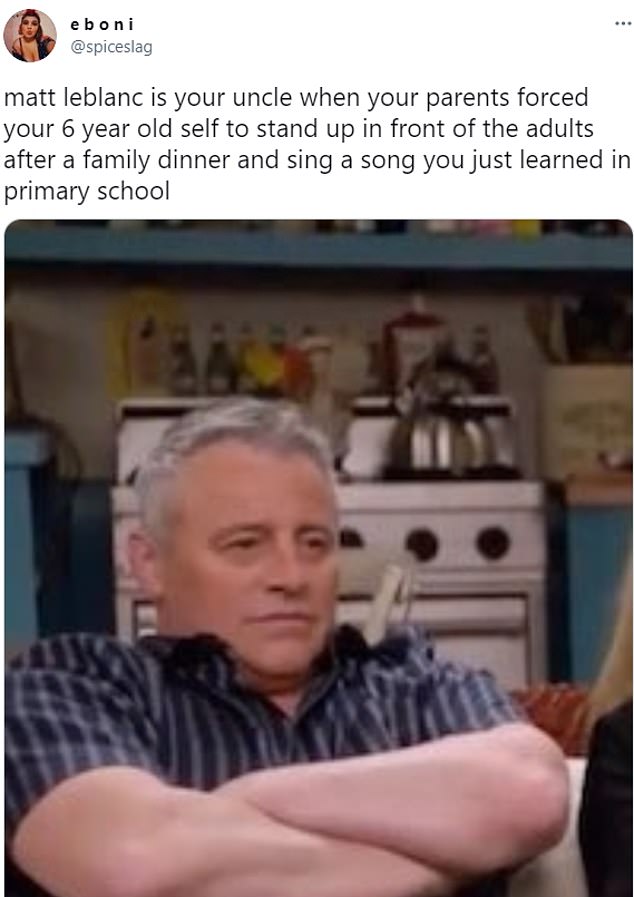 My eyes, my eyes! Another joked that LeBlanc looked like a uncle being forced to watch a child’s play 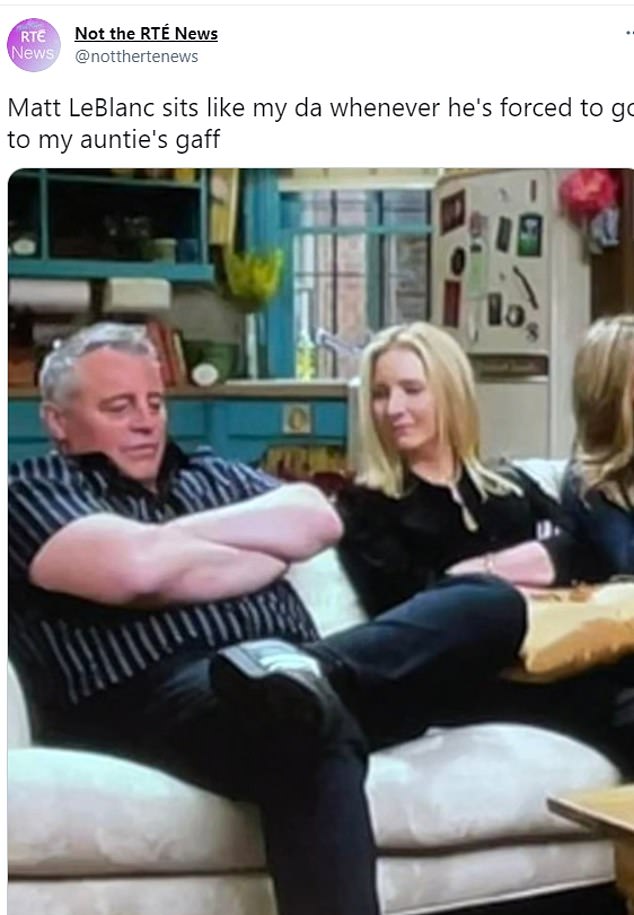 Get me out of here! Another joked that Matt LeBlanc looked ‘their Dad when they’re forced to stay at their aunties house’ 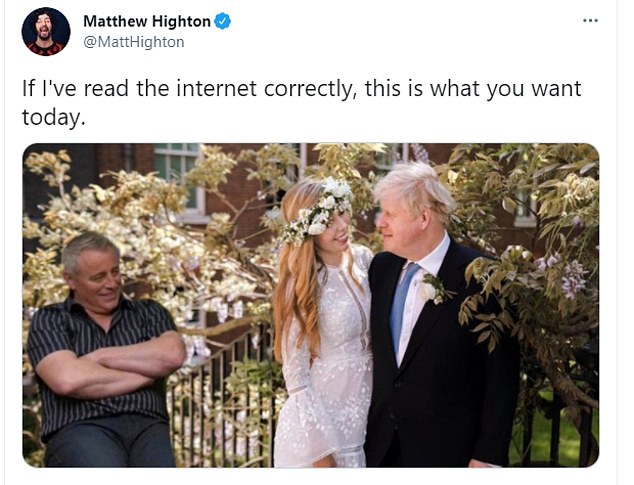 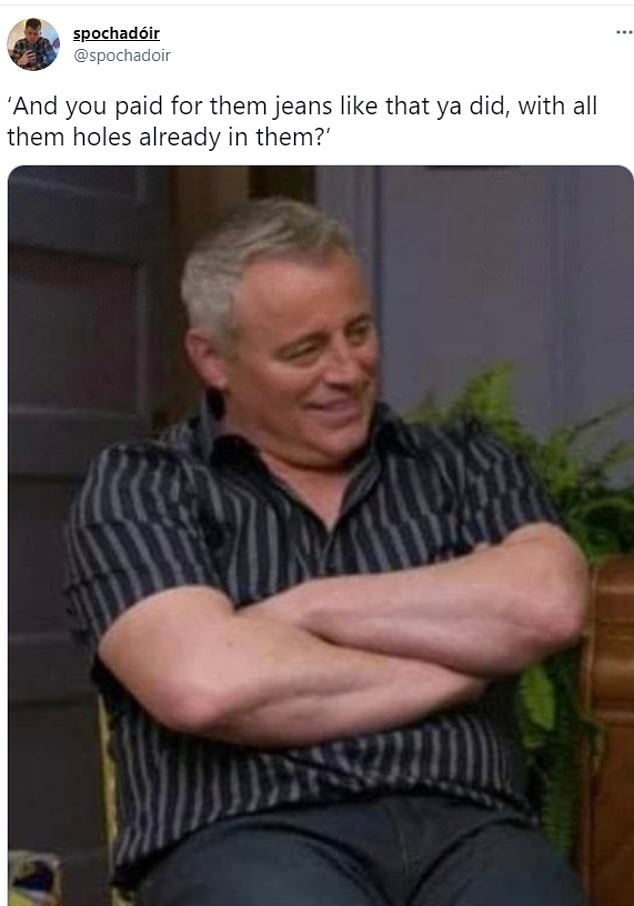 You paid for that! Another quoted a dad complaining about their kids buying ripped jeans