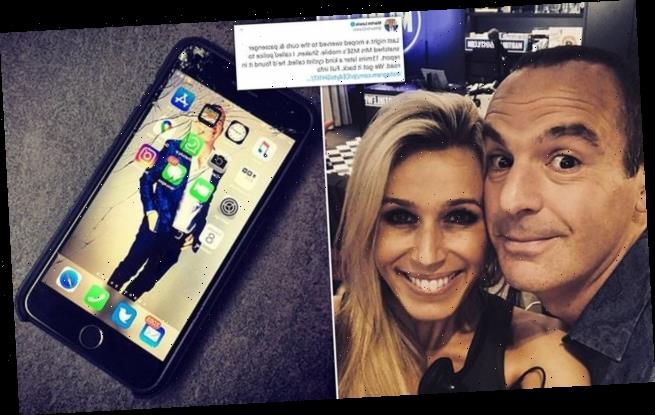 Martin Lewis has revealed his wife Lara Lewington was robbed in ‘terrifying’ motorbike snatch and grab theft earlier this week.

The financial journalist, 48, from London, who’s been married to fellow British broadcaster Lara, 40, since May 2009, said his wife was left ‘shaken’ by the street robbery as he revealed the shocking story on Twitter.

Meanwhile Lara, who works as a technology journalist, recalled further details on her Instagram yesterday, posting: ‘Last night whilst out walking, a motorcycle swerved at speed, and the pillion rider grabbed my phone out of my hand…with terrifying pace and accuracy.’

She went on to reveal she was able to get her phone back after a cyclist found it dumped in the street by the thieves. 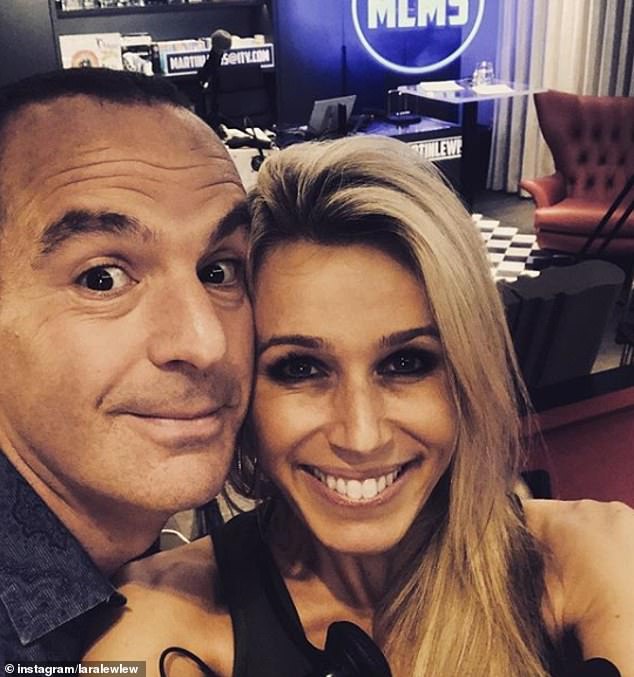 Martin Lewis, who’s been married to fellow British broadcaster Lara Lewington, 40, since May 2009, said his wife was left ‘shaken’ by the snatch and grab theft as he revealed the shocking story on Twitter

‘Shaken, I called police to report. 15mins later a kind cyclist called, he’d found it in road. We got it back…’

Meanwhile Lara revealed she had initially thought the robbery was an accident, and explained: ‘So focussed on mask and hand sanitising these days, I guess I’d forgotten to be so vigilant about this. 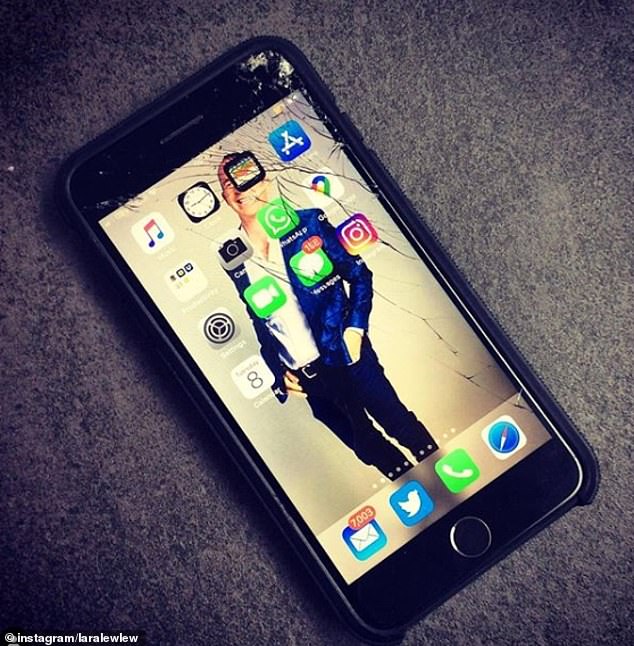 Meanwhile Lara went on to share a snap of her smashed phone on Instagram, adding the thieves swerved their motorbike into her and worked with ‘terrifying pace and accuracy’

She went on to explain she had been left devastated by the theft because she had lost ‘many photos’ stored on the mobile.

Lara revealed: ‘Obviously I was immediately grateful not to be hurt, and that my daughter wasn’t there to witness it – just a bit gutted I’d lost so many photos after a series of inexplicable backup fails.

‘After my husband called the police (whilst I mentally figured out the frustrating and time consuming admin I’d need to do), shockingly via a call ‘home’ he got a message from a kind cyclist who had found the phone minutes later (thieves had dumped it) – and despite how damaged it was, and the coronavirus risk, had picked it up and tried to find its owner.’ 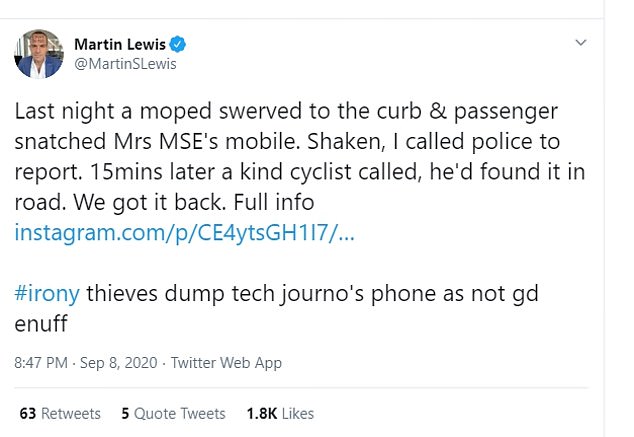 The money saving expert recalled the shocking moment on Twitter, adding that a cyclist later returned the phone after finding it dumped in a road 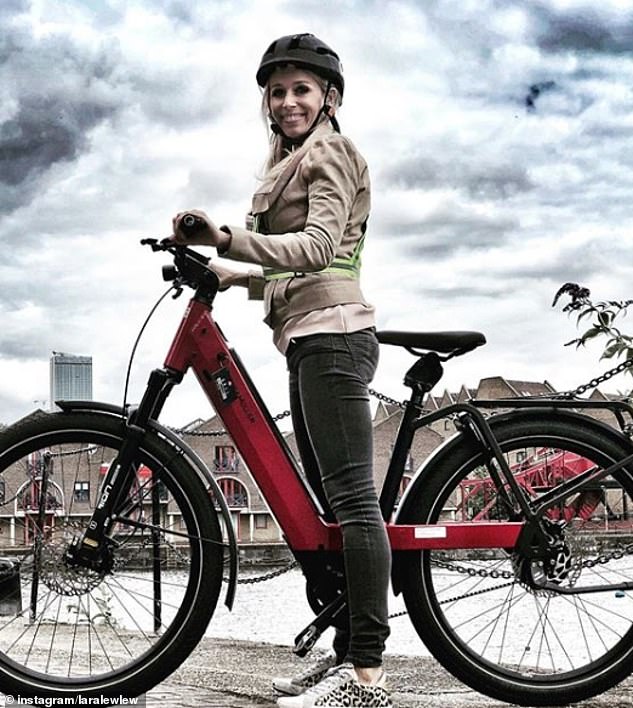 Lara, who works as a technology journalist, said she was thankful to have gotten the phone back after the horrendous ordeal

She continued: ‘Despite some initial weariness, we explained, to his shock, what had happened and asked if he’d meet us in a busy place. He was happy to.

‘We jumped in a black cab to get there, told Junior the cabbie the story (he was outraged, and kindly decided to wait with us whilst we checked this wasn’t part two of the scam).

‘But when we got there, Sam the cyclist, was an honest nice man, and returned my phone. The screen smashed, but the photos intact. Police report updated.’ 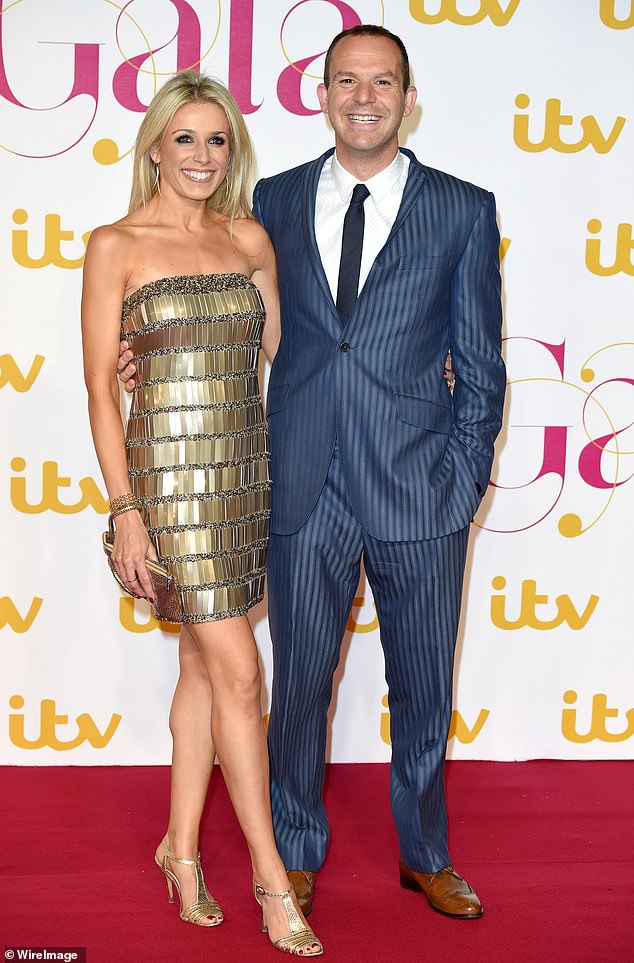 The couple have been married since 2009 and share one daughter together, Sapphire, who was born in 2012

Lara added: ‘The moral of the story? Have an old smartphone that not even a thief thinks is worth having. (And yes, it does say 7003 e-mails, who’d want to deal with them (don’t worry I have dealt with them all on laptop)?!)’

Lara is a TV presenter, journalist and former weather presenter and since 2011, she has fronted BBC’s Click, a technology news show. She is also the technology columnist for Woman magazine.

The couple share one child together, daughter Sapphire, who was born in 2012.

Born in Manchester in 1972, Martin grew up in Cheshire’s Delamere Forest and now lives in London with his wife, Lara Lewington, a presenter on BBC’s Click and their seven-year-old daughter, Sapphire.

Lewis attended the King’s School, an independent school in Chester, and read government and law at the London School of Economics.

In 1997, Lewis became a postgraduate student in broadcast journalism at Cardiff University Centre for Journalism Studies.

After graduating, Lewis became a producer for the BBC Business Unit working on the BBC Radio Five Live business programmes and as an editor of BBC Radio 4’s Today programme business slot.

Lewis then moved to Sky’s programme Simply Money, fronted by Angela Rippon, where he solidified his role as the Money Saving Expert. In 2001 the show was cut and nearly all of its staff, including Lewis, lost their jobs.

In 2003 Lewis set up MoneySavingExpert.com from his living room for £100. With a focus on how to cut your bills without cutting back, it soon saw explosive growth.

It is now the UK’s biggest consumer site with over 15 million monthly users and 12 million who asked to receive the weekly Money Tips email.

In 2012 the website was sold for £87million to MoneySupermarket.com, with Lewis reportedly pocketing at least £35million.

Martin used some of the proceeds to set up a £10 million charity fund.

As well as the Money and Mental Health Policy Institute, major projects include £2 million to Citizens Advice and launching ‘financial triage’ at Trussell Trust foodbanks.

In 2008, Martin launched The MSE Charity, and is still its patron. It has so far helped connect more than £660,000 in small grants to local consumer finance and education charities.

In 2014 Lewis was awarded an OBE for services to consumer rights and charitable services.