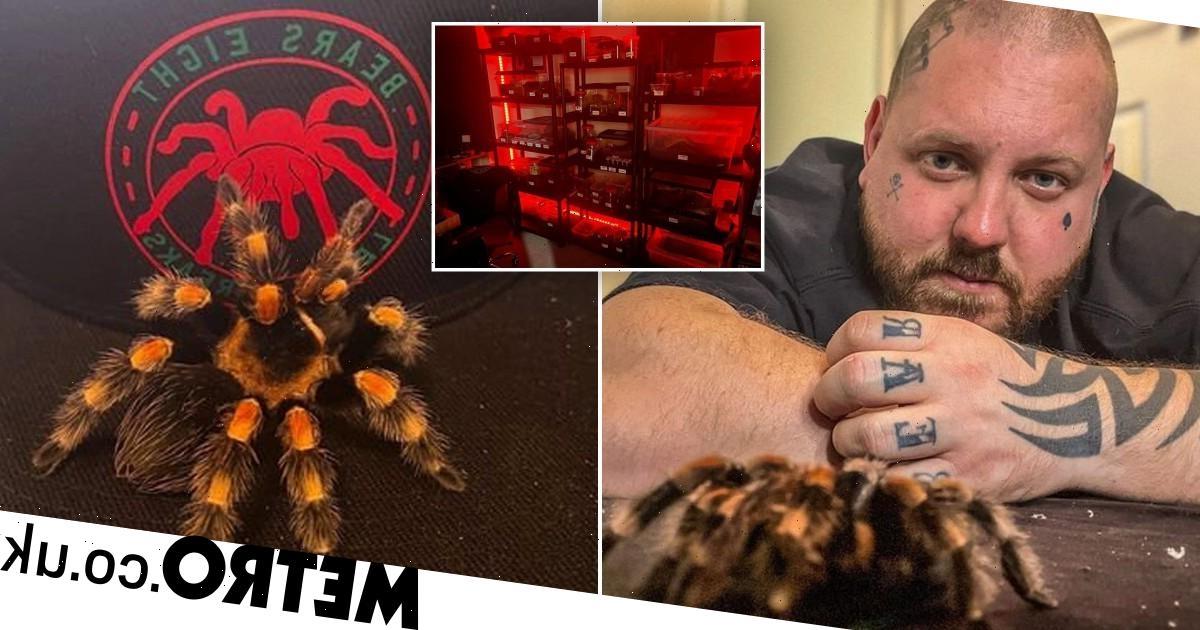 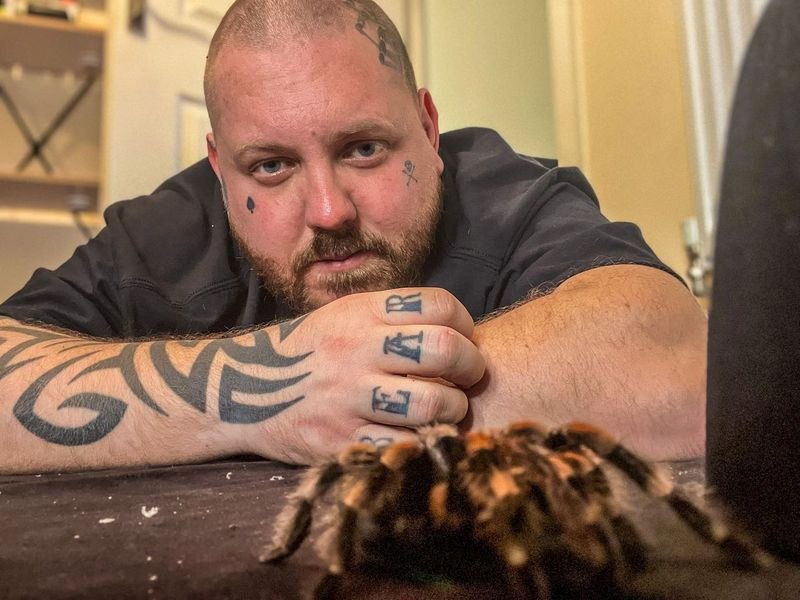 A man who lives with 120 pet tarantulas has even given them their own bedroom in his house and spends all his time caring for them.

Aaron Phoenix, 34, took a rather unusual approach when a therapist instructed him to adopt a new hobby to help with his mental health.

Instead of starting a sport or craft, Aaron, from Yate, Bristol, opted to become a spider dad – to 120 tarantulas.

Now, the creepy crawlies have an entire room to themselves in his house, and he dedicates all his spare time to looking after his eight-legged friends.

In fact, he says getting his ever-growing collection of tarantulas has done wonders for his mental health – and sitting in the room with them is his ‘happy place.’

‘They’re my passion, obsession, whatever you want to call it,’ says Aaron, who works as a house removal contractor.

‘The doctor told me a hobby would focus my mind – it was true, I find them fascinating. I could sit and watch them for hours – they’ve had an incredible effect on me and I’ll never give up owning tarantulas now.

‘People’s reactions when I tell them are fantasic – they can’t believe it! Although I do think tarantulas are misunderstood – there’s no need for such a fear.

‘I can’t expect everyone to see them the way I do, but I wish people would open their minds to these beautiful creatures.’

Aaron, step-dad to his partner’s two teen girls, was first drawn to tarantulas as a child and says he fell in love with them when he got his first one as a teenager.

Now older, and living with partner Jo, 45, and her two daughters Dannon, 18, and Lillie, 14, his love for tarantulas has never been stronger.

Last summer, following a diagnosis of bipolar disorder alongside a diagnosis of depression a year earlier, therapists suggested a way to help Aaron’s mental health would be to get a hobby.

So Aaron decided to re-kindle his passion for the eight-legged creatures, and purchased a few tarantulas.

‘When the therapist asked if there was any activity I enjoy that that might help take my mind off things, it came to me straight away,’ he says.

‘At the beginning, my partner and the kids were a bit freaked out, but they saw the positive effect it had on me immediately and became supportive.’

Since summer of 2021, he has collected 120 tarantulas, alongside five other spiders, three scorpions, three praying mantises and a centipede.

They all live in separate enclosures in his spare room – known as his happy place – where he spends almost all his free time.

He says: ‘I check on them every morning and evening although if I had time, I could stand and watch for hours.

‘I’m just fascinated by them – all the different sizes and shapes and colours. When I’m with them, whether it’s feeding, watering or rehousing them, nothing else in the world matters.’

He says he’s the easiest family member at birthdays and Christmases – because everyone just buys him vouchers for shops so he can buy more spiders. And he has no plans to stop – vowing to be a tarantula owner for the rest of his days.

‘They have without a doubt changed my life – I’ve never had something I’m so passionate about before,’ says Aaron.

‘They all have their individual quirks – one of my first girls comes up to the top of the enclosure when I drop food in, and does this little happy dance to say thank you.

‘Another runs to the lid to greet you whenever you walk into the room – it’s beautiful to watch.’

He hopes that one day, people will open their minds to the creatures. He has even started a YouTube channel to help people to see creepy crawlies shouldn’t be feared.

‘I can’t expect everyone to look at them the way I do, but I would love people to open their mind to what they are,’ says Aaron.

‘Arachnophobia is one of the most well-known fears on the planet, but there’s no need for such a fear of them. To me, they’re beautiful creatures – they’re just so misunderstood.’