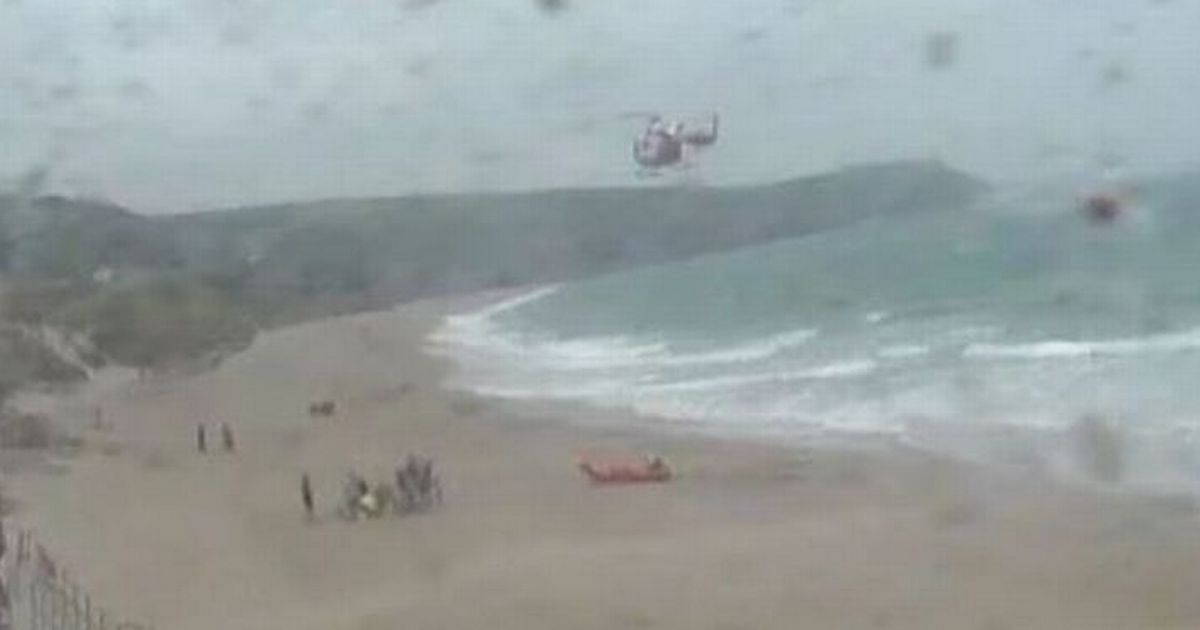 A man who was pulled from the sea by lifeguards has become the fourth victim of Britain's scorching summer heatwave in two days.

He was taken ashore and treated by paramedics in Cornwall after reports of a man seen in trouble in the rough seas on Friday.

It follows the deaths of two men, aged 25 and 26, after they were swept off rocks at Anstey's Cove in Torquay, and a 12-year-old girl who drowned in a river in Greater Manchester the previous day.

A Devon and Cornwall police spokesman said: "Police were called to Prussia Cove near Penzance around 1.05pm following reports that a man had got into difficulty in the sea.

"He was recovered from the water by a lifeguard and treated by ambulance.

"He was taken to Praa Sands and was sadly confirmed deceased a short time later."

He has not been named as next of kin are being traced following Friday's incident.

Lifeboats from Penlee and coastguard rescue teams went to the scene after multiple calls were made to 999 after the man was seen in trouble in the rough seas.

CCTV showed a helicopter hovering over the cordoned off beach as rescuers treated the man.

And in other incidents around the south Devon coast a teenage girl was airlifted to hospital from Sidmouth beach after suffering a suspected heart attack.

Emergency services were called to Sidmouth Beach at about 2.40pm on Friday following reports that a girl had got into difficulty while in the water, Devon Live reports .

The air ambulance attended the scene while police closed off roads around the beach.

The girl was given CPR and a defib was used to aid her until paramedics arrived and she was later flown to Bristol Children's Hospital for treatment.

Posting on Facebook , a spokesperson for the Beer Coastguard Rescue Team said: "Tasked to assist the Air ambulance and southwest ambulance paramedics with a young female with a suspected heart attack on Sidmouth beach.

"Paramedics gave treatment to the casualty on Sidmouth seafront before she was flown to Bristol children's hospital.

"Thanks to Jurassic paddle sports staff and beachgoers, who gave CPR and used a defib to help her unit the paramedics and air ambulance arrived.

"We wish her a speedy recovery."

A witness to Thursday's incident in Torquay said the pals may have been 'tombstoning' when strong waves knocked one of them off rocks and the other jumped in to try to save him.

Holidaymaker Leah McCalla said the local men were pulled from the sea off Babbacombe Beach in Torquay, Devon.

"The two boys were laying sort of side by side (on the pier), and very unresponsive," she said, describing the tragedy.

“I think we were doing CPR for over 40 minutes. We were rotating three minutes each until the ambulance came and had the defibrillator.”

The horror incident was captured on video as one of the men had an action camera "around his neck" when his body was recovered on Thursday afternoon, she added.

The sea was rough due to strong winds, and both men had been thrown against the rocks by waves.

Police are investigating whether the men had been 'tombstoning' – where thrillseekers plunge into the sea from cliffs or walls – before they were pulled from the sea.

A spokesperson for Devon and Cornwall Police said on Friday: "Two men have died following an incident off Torquay yesterday.

"Police were called by the coastguard at around 2pm with reports that two bodies had been pulled from the water near Babbacombe Beach by the RNLI lifeboat.

"Emergency services including ambulance, police and HM Coastguard attended the scene where the men were brought to shore and taken to Torbay Hospital.

"The local men, aged 25 and 26, were pronounced deceased. Their next-of-kin have been informed."

Elsewhere, in Greater Manchester, a 12-year-old girl drowned in a river, prompting a police warning about climbing into water during the heatwave.

Officers were called to the River Irwell in Bury, Greater Manchester, at 7.55pm on Thursday after reports a young person had got into difficulty in the water.

Emergency services responded and underwater search teams were sent to examine the area, where they tragically discovered the body of a 12-year-old girl.

Police have not confirmed the schoolgirl was swimming before she died, but have warned about the dangers of climbing into water during the heatwave.

Detective Inspector Andrew Naismith said: “This is an incredibly tragic incident in which a young girl has lost her life, and my thoughts are with her family at this devastating time.

“We have a team of detectives working on this, but there are not believed to be any suspicious circumstances at this time."

He added: “With the warmer weather, it’s tempting to go into the water to cool off, but I’d like to remind everyone of the dangers of playing near or swimming in rivers, lakes and reservoirs and would strongly urge against this.”

The death is not being treated as suspicious.

Later on Friday two children were pulled from the sea at Seaton, east Devon, after being washed out 180 metres from the Axe estuary.

The pair were rescued by a lifeboat and a coastguard spokesman said: "Both were cold and one had swallowed sea water."

Both were taken to the A&E department at Dorchester Hospital in Dorset.