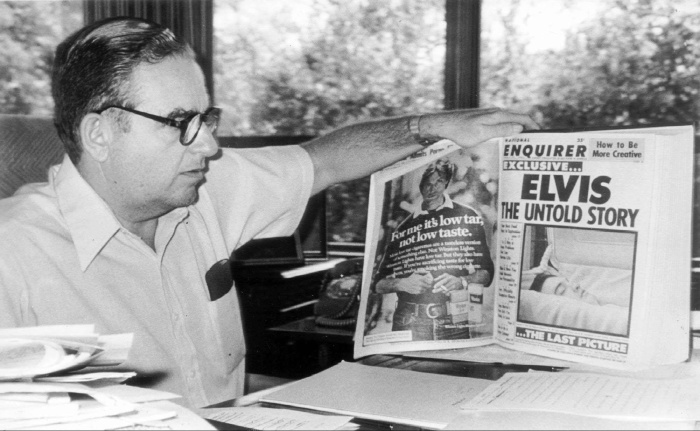 Magnolia Pictures has acquired North American rights to “Scandalous,” a deep dive into the history of the National Enquirer, an influential tabloid that’s covered everything from celebrity breakups to alien landings. Directed by Mark Landsman (“Thunder Soul”), the film looks at the publication’s impact on journalism, culture, and politics.

“Scandalous” follows Generoso Pope, Jr., the man who purchased the New York Enquirer in the 1950s and rebranded and renamed the publication the National Enquirer. Pope used funds supplied by his godfather, reputed mob boss Frank Costello to make the purchase and charts the publication’s metamorphosis from a racing and sporting newspaper into a grocery store tabloid filled with stories of medical oddities, conspiracy theories, and paparazzi photos.

“The real story behind the National Enquirer is like a classic monster movie from the 1950s where initially the creature doesn’t intend to harm anyone, but is soon wreaking havoc on the population,” said Landsman. “I was fascinated by the men and women who made that havoc happen, and thrilled to have the opportunity to tell the inside story.”

The movie includes interviews with former staffers and other media observers, while also looking at its practice of catching and killing stories to protect powerful men (among them President Donald Trump), as well as its pivot into profiling foreign despots.

“’Scandalous’ is a blast,” Magnolia President Eamonn Bowles said in a statement. “Mark Landsman has crafted a hugely entertaining origin story that turns the lens on one of America’s most infamous publications.”

Magnolia Pictures and CNN Films have partnered on a half-dozen films in the past, including the Oscar-nominated “RBG,” a look at Justice Ruth Bader Ginsburg, as well as “Blackfish,” an expose about the dangers of keeping orcas in captivity, and “Life Itself,” the story of film critic Roger Ebert. At a time when the indie film space is struggling to find breakout box office hits, documentaries have been a source of commercial strength. “RBG” and other non-fiction films such as “Free Solo” have been among the biggest indie successes in recent history.

“The National Enquirer has been behind some of the headlines that have shaped our culture for the past few decades, disrupting the norms of traditional journalism in groundbreaking, yet provocative ways,” said Courtney Sexton, VP for CNN Films, in a statement. “This is a timely and captivating tale, reflecting the zeitgeist of our time. ‘Scandalous’ is a beacon to that.”

The deal was negotiated by Magnolia EVP Dori Begley and Magnolia SVP of Acquisitions John Von Thaden with CAA Media Finance on behalf of the filmmakers; by Stacey Wolf, Vice President of Business Affairs, and Kelly MacLanahan, Assistant General Counsel, for CNN Worldwide on behalf of CNN Films; and by AGC Studios’ VP of Legal and Business Affairs Anant Tamirisa on behalf of AGC.