If this were a reality show, what an absolute corker it would be. Mix The Voice and Dancing with the Stars with maybe a dash of Lip Sync Battle and RuPaul’s Drag Race, and it won’t even come close to what’s been dubbed the “Madonna bootcamp”.

A biopic of Madonna, the 63-year-old, 335-million-records-and-counting, genre-busting pop icon has been in the works for a few years, but seems to be gathering steam with casting rumours and reports about a “gruelling” audition process making recent headlines.

No one would expect being Madonna to be an easy task. Her route to fame back in the 1980s was hard-won, where she showed that hard work, ambition and determination were equal if not bigger forces than singing and dancing aptitude. For contenders linked to the project, it looks like that same level of all-in effort is being called for in the elimination process. 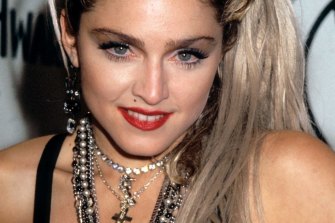 Madonna, pictured in 1985, on her meteoric rise to fame. Credit:AP

Let’s be clear about what we’re dealing with here: Madonna is producing and directing a biopic about Madonna, co-written by Madonna (and Erin Cressida Wilson). To score the role as Madonna, candidates are being put through a “Madonna bootcamp”, involving 11-hour dance sessions with Madonna’s choreographer. Then there’s the script read-throughs and singing rehearsals with, yes, Madonna.

The Hollywood Reporter reported on the arduous demands earlier this month, with a source saying: “You have to be able to do everything.”

Ozark‘s Julia Garner appears to be the frontrunner to play the singer, and is a great fit with her curly blonde crop and exceptional acting chops. Another acclaimed actress among the hotly tipped is Florence Pugh (Little Women, Black Widow), who, as well as an Oscar nomination under her belt, has a singing side-hustle, including doing back-up vocals on her brother Toby Sebastian’s single last year.

Other names in the mix include Euphoria’s Alexa Demie, also a singer, Emma Laird (Mayor of Kingstown), and singers Sky Ferreira and Bebe Rexha. Australian actress Odessa Young (Mothering Sunday) is also in the running. 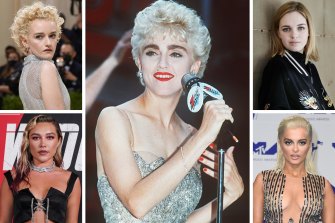 Reports vary on the period the film will cover, but given the age of the mooted candidates, ’80s Madonna is a fair call. The Hollywood Reporter suggests the current screenplay reaches its crescendo with the blockbuster 1990 Blond Ambition tour – arguably Madonna’s peak of mega-stardom, monster tunes, bleach, conical bras and stage production, and helpfully chronicled for research purposes in the documentary Madonna: Truth or Dare (1991). 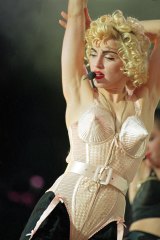 Madonna performing the Blond Ambition tour in London in 1990.Credit:AP

Objectivity, or a lack thereof, is an obvious issue. Madonna herself has said: “Who better to tell [the story] than me?” but given her involvement and renowned perfectionism, it’s an open question whether the role is a golden opportunity or poisoned chalice.

Past biopics have shown both the potential and pitfalls when subjects run their own show. Queen’s Bohemian Rhapsody (2018) scored big at the box office and the Oscars, with four wins including best actor for Rami Malek as Freddie Mercury. But with Brian May and Roger Taylor as consultants on the project, creative licence was stretched to the point where it was at times a Spinal Tap-esque parody. Rocketman (2019), steered by Elton John and husband David Furnish and starring Taron Egerton, was also loved at the box office and award ceremonies, and was praised for its warts-and-all honesty and accuracy.

So, what can we expect of Madonna by Madonna? Definitely a significant dose of control and interference – the pop icon hasn’t maintained her decades-long career without absolutely sweating the small stuff. As director, it will be totally her vision, with her high standards – although it’s worth noting that in the realm of helming a film, her two previous efforts, Filth and Wisdom (2008) and W.E. (2011), were mostly flogged by critics who implored her to stick to the day job.

However, as a slice of flashy, trashy, glorious ’80s pop history, straight from the horse’s mouth, there is so much potential at play. Whoever survives the audition hunger games has their work cut out for them, for sure, but playing a legend while being guided by that very same legend could just conjure up some Madonna magic.