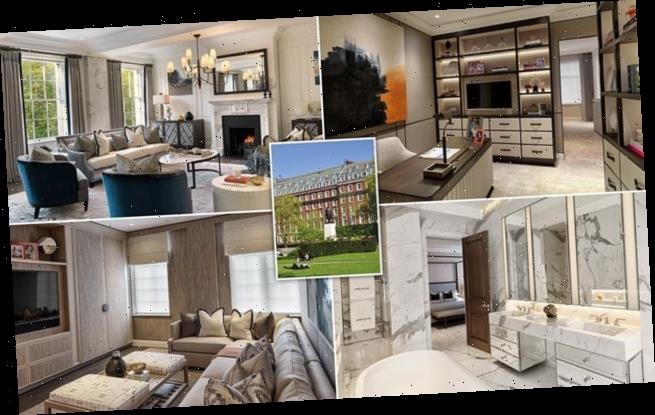 A stunning apartment which used to belong to aviation tycoon Sir Frederick Handley Page has gone on sale for £18.75million.

Its lateral living space is made up of a grand entrance hall, with double doors leading onto a magnificent south-facing reception room, with five tall windows overlooking the square. 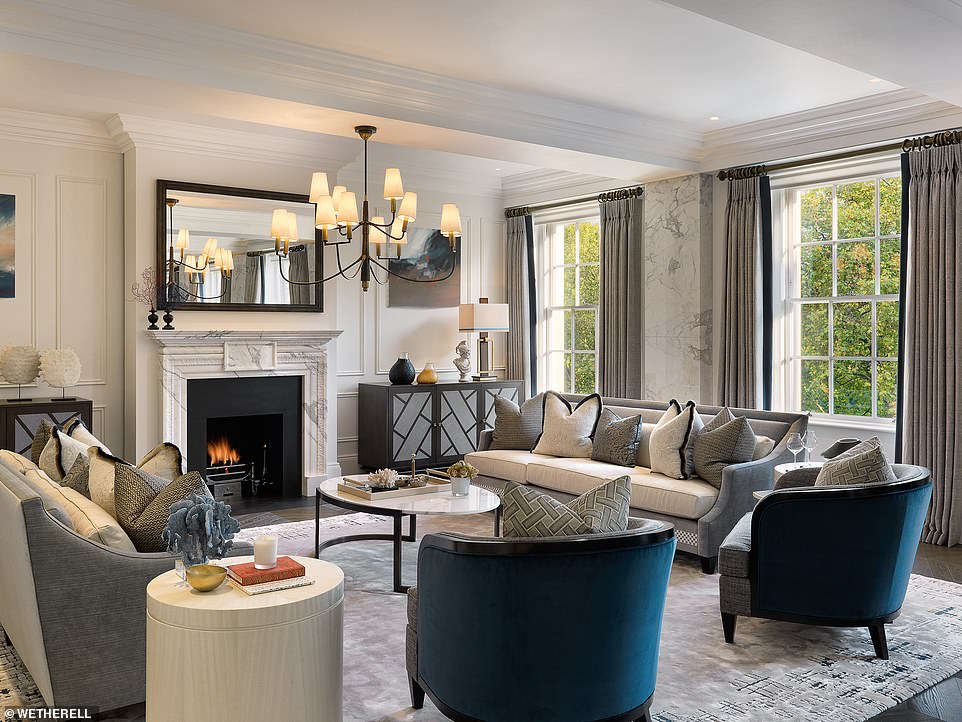 A stunning apartment which used to belong to aviation tycoon Sir Frederick Handley Page has gone on sale for £18.75million. Pictured: the stunning south-facing living room 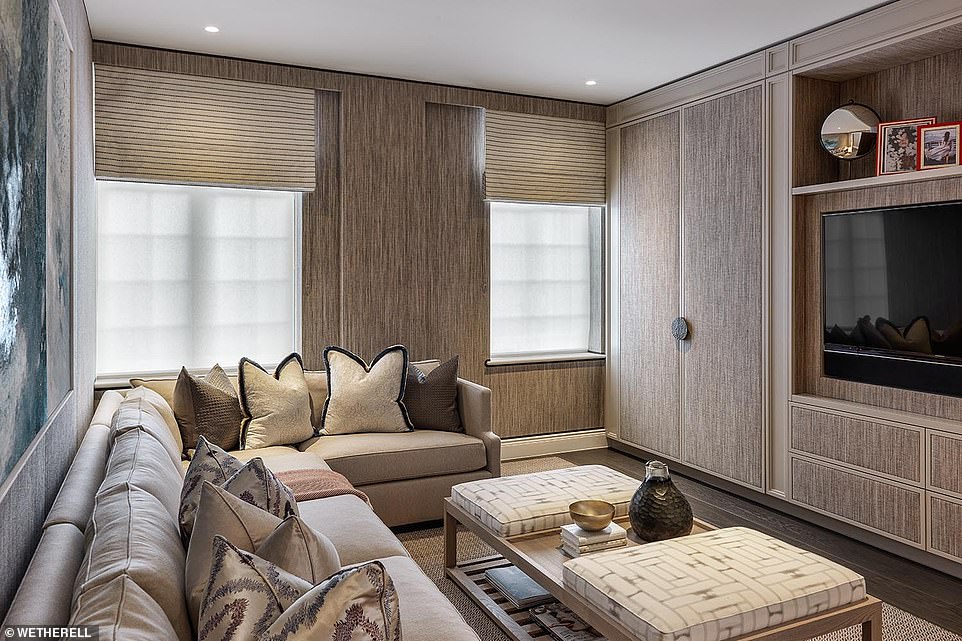 One bedroom is designed to serve as a media room or an 18-seat private cinema, with a large flatscreen built into the wall

The residence, on sale with Wetherell, also features a large family kitchen and breakfast room, a study, a long gallery, a guest powder room and four bedroom suites including a master with a walk-in dressing room and master bathroom.

One bedroom is designed to serve as a media room or an 18-seat private cinema, with a large flatscreen built into the wall.

The home has recently been completely remodernised and refurbished to provide an immaculately presented and dressed residence with a bespoke specification and high quality interior design.

Its entrance hall is fitted with exquisite marble flooring with a Pietra grey border, and bespoke floor to ceiling doors and architraves. 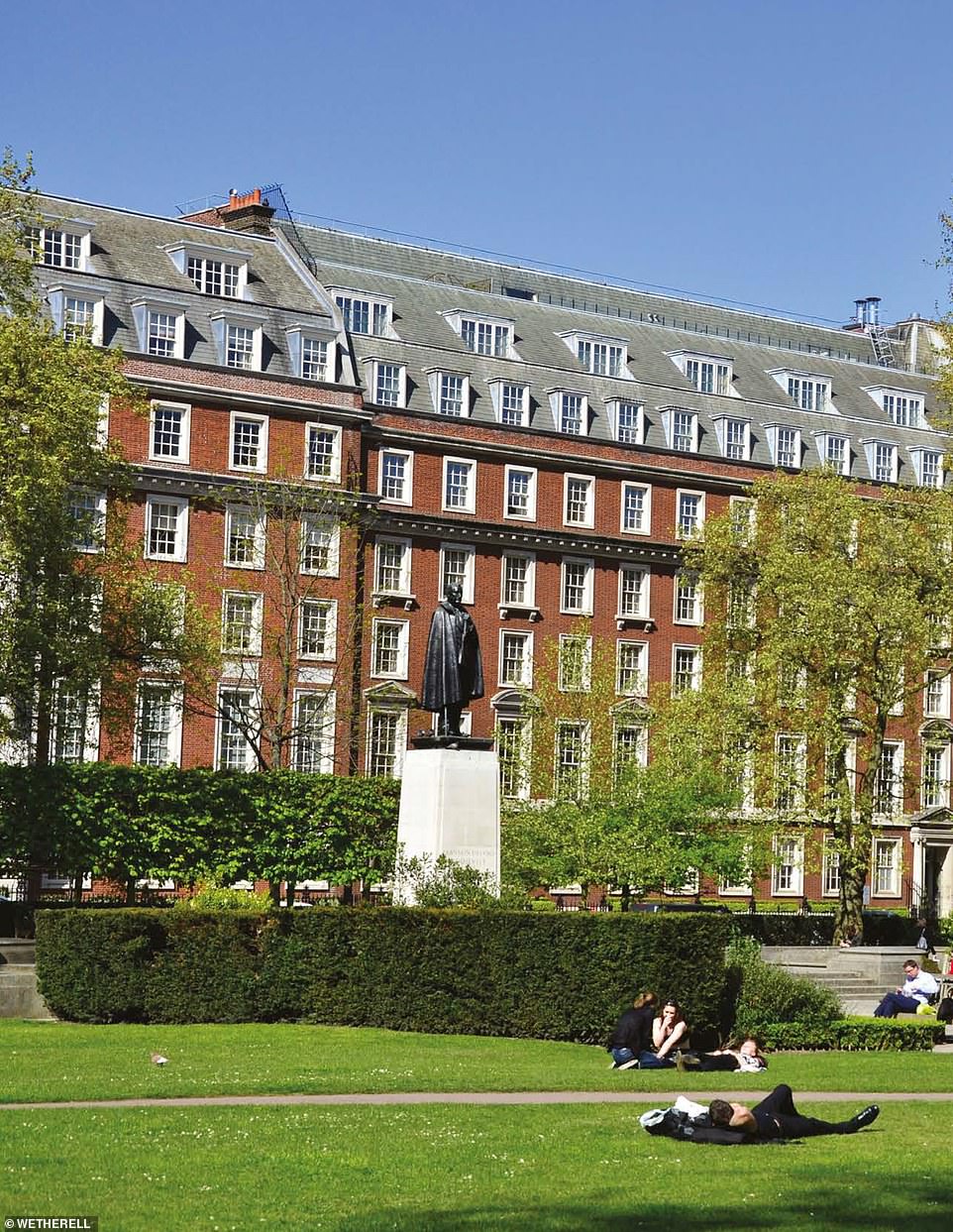 Number 18 Grosvenor Square was built in 1938-1939 in a neo-Georgian style to designs by Detmar Blow. The third floor apartment extends the entire depth of the building (pictured from the outside) 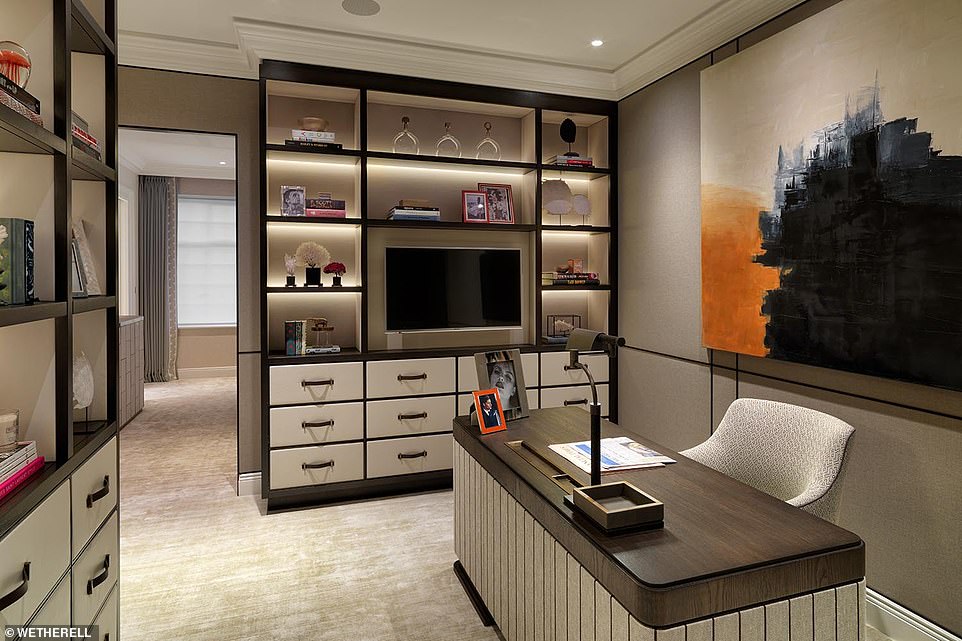 The home has recently been completely remodernised and refurbished to provide an immaculately presented and dressed residence. Pictured: the study 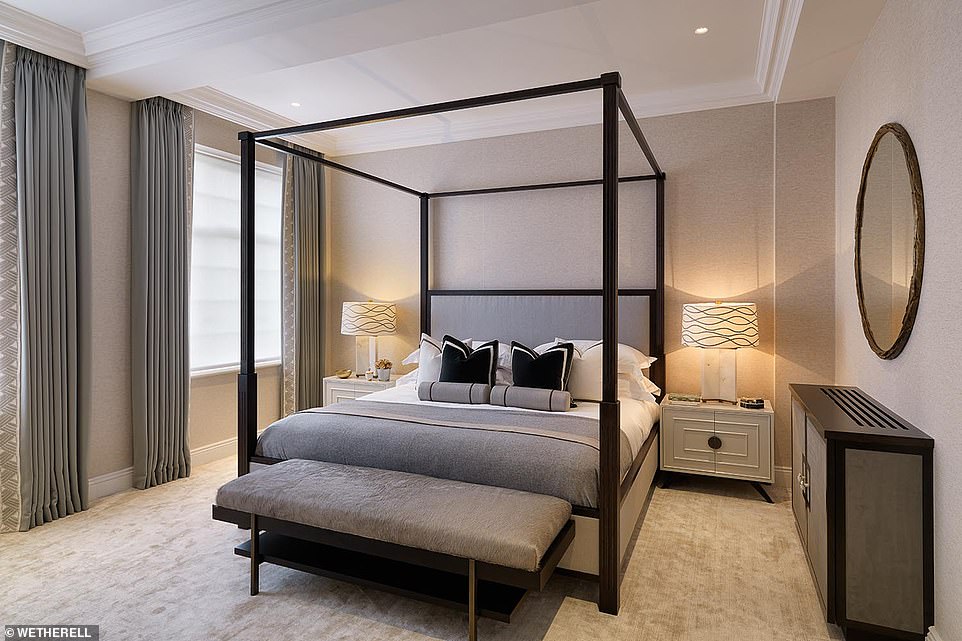 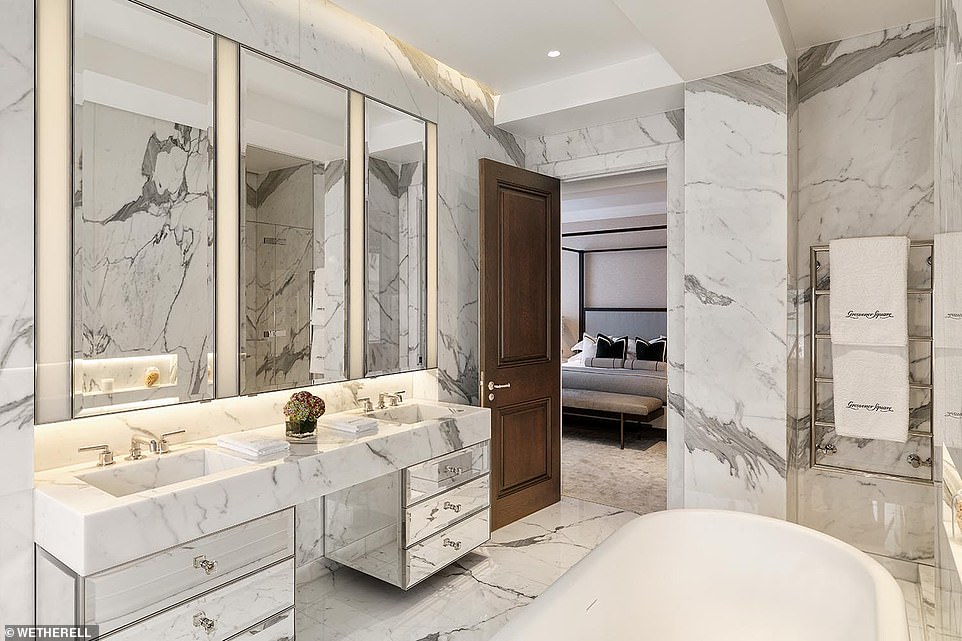 With its sleek design, the master bathroom is fitted with underfloor heating, a free-standing bath, a marble double vanity unit and a walk-in rain shower which also acts as a steam room 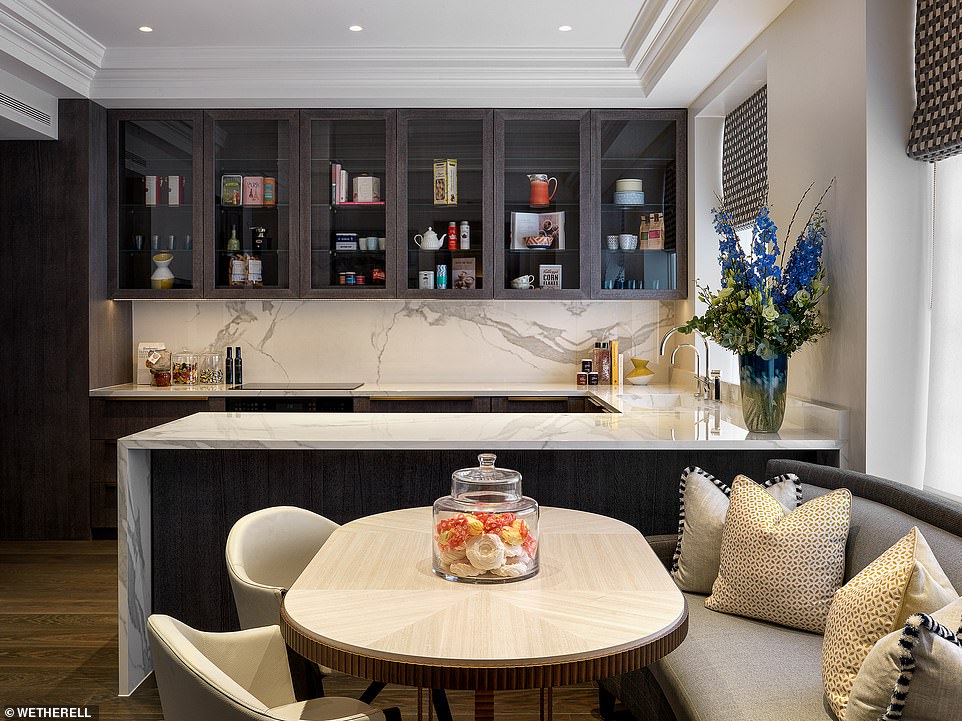 As well as the family kitchen, there’s a breakfast room for more casual dining, with marble a common surface throughout the home 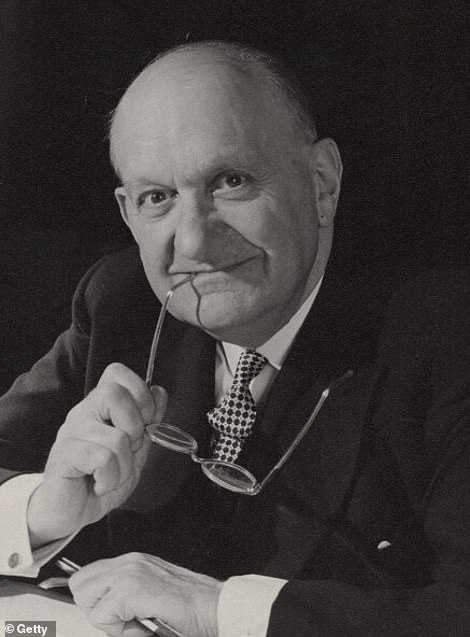 When Sir Frederick (pictured) and his wife Lady Una moved into the apartment in 1946, he was already a legend in the global aviation industry

It’s dressed to provide a comfortable living area, an entertaining area with an elegant grand piano, and a 10-seater formal dining area.

With its sleek design, the master bathroom is fitted with underfloor heating, a free-standing bath, a marble double vanity unit and a walk-in rain shower which also acts as a steam room.

Number 18 Grosvenor Square was built between 1938 and 1939 in a neo-Georgian style to designs by Detmar Blow, Estates Manager to the Duke of Westminster, and Fenand Billerey, the French Beaux-Arts architect.

The internal fit out was disrupted by WWII, so it was not until after 1945 that the building was fully completed, allowing residents to occupy the apartments.

When Sir Frederick and his wife Lady Una moved into the apartment in 1946, he was already a legend in the global aviation industry.

His company, Handley Page Limited, which was established in 1909, was the first British public company to build aircraft.

The Handley Page Factory at Radlett Aerodrome built bombers essential for British success in WWI. In the interwar period, Sir Frederick’s luxurious airliners were used by Imperial Airways on routes to Africa, the Middle East and India.

One of his airliners, Hanno, was the first to fly the then rulers of Dubai and Abu Dhabi. 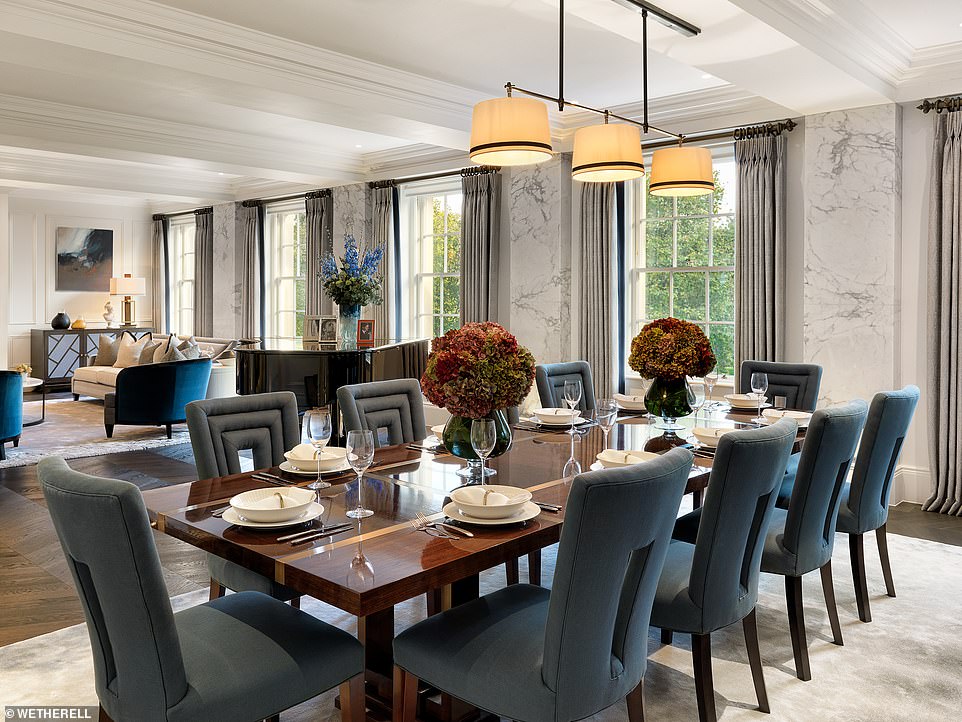 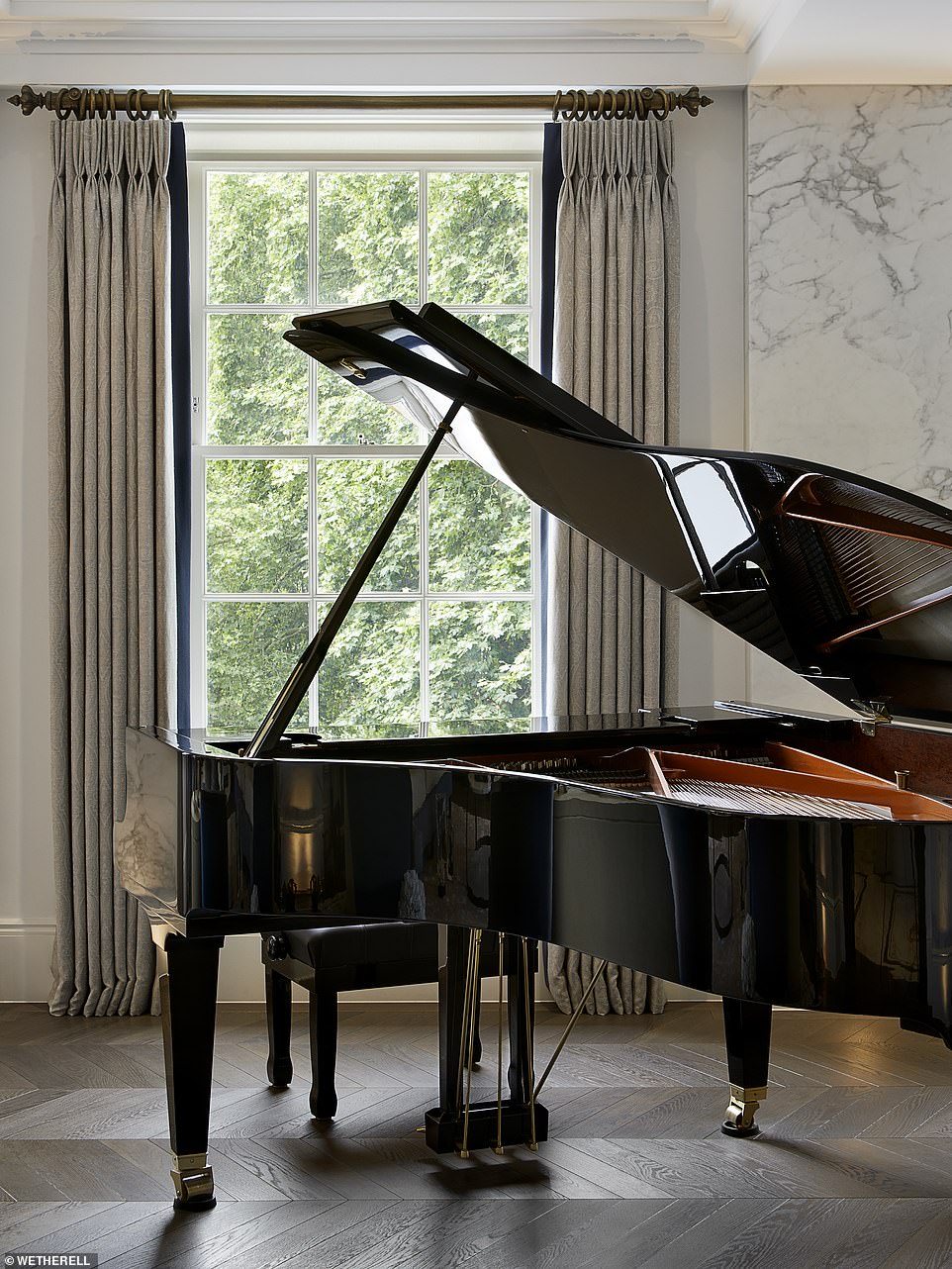 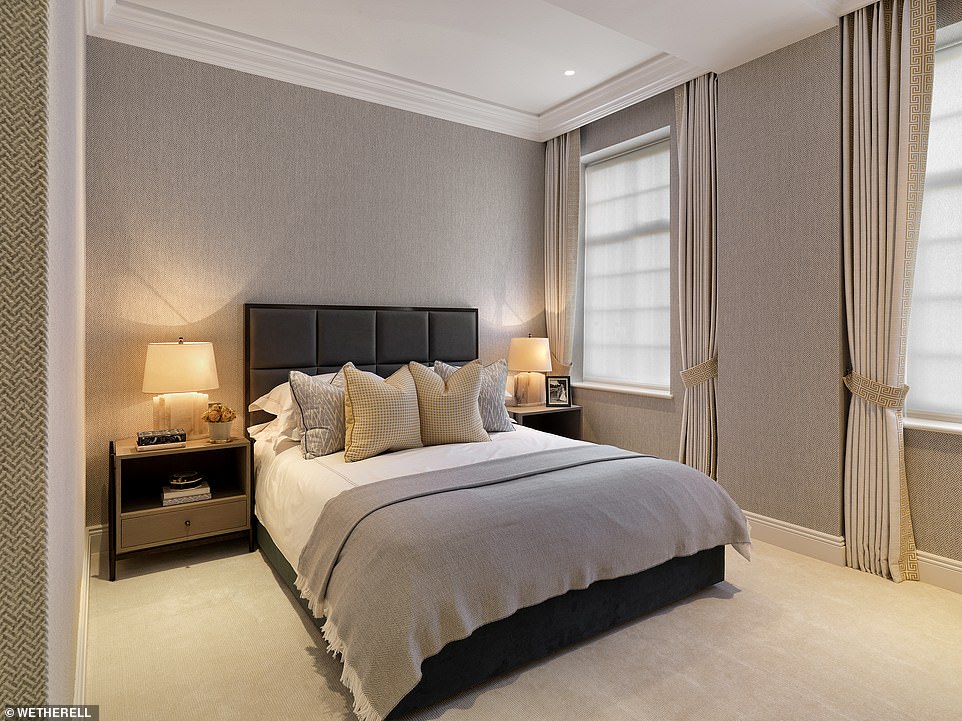 The other bedrooms in the home all feature their own ensuites and are generous in size, with luxurious carpets and furnishings 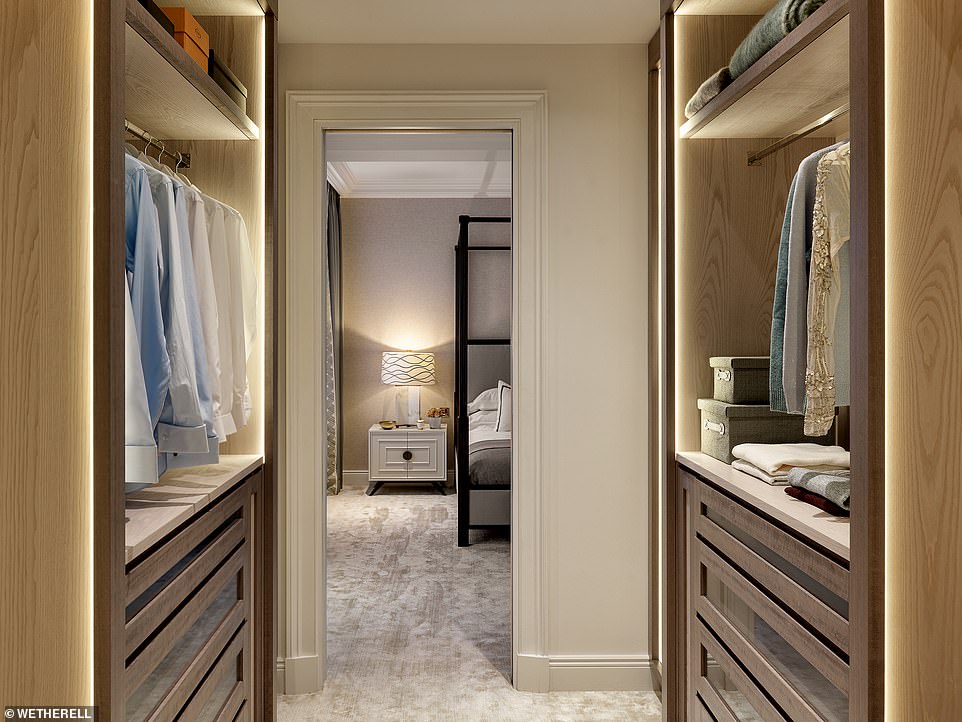 The walk-in dressing room is lined with bespoke fully-fitted wardrobes with full-height hanging rails and adjustable drawers and shelving. The sleek design has the ergonomics of a superyacht interior 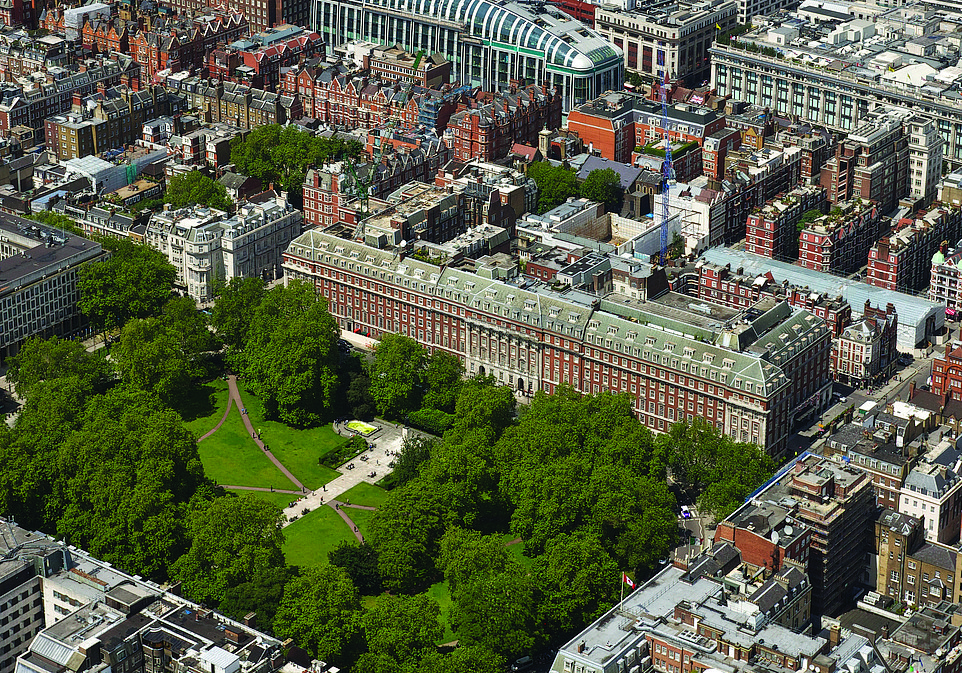 Grosvenor Square is currently benefitting from a luxury makeover, with former Canadian Embassy & US Naval Building being transformed back into luxury apartment buildings

In 1942 he was knighted by King George VI for the Halifax and his contribution to the war effort.

After the Second World War, Sir Frederick and Lady Una spent weekends at Limes House in Middlesex – their magnificent country house, purchased in 1922 and set in 4.2 acres of gardens.

From 1954, Sir Frederick served as Lord Lieutenant of Middlesex. When in London during weekdays, the 18 Grosvenor Square apartment served as the couple’s luxurious Mayfair pied-a-terre.

Post-war, Handley Page Limited produced the V-Bomber, part of Britain’s nuclear deterrent, and also the Herald airliner – a favourite of HM The Queen Mother for her journeys from London to Balmoral and Birkhall.

In 1959, American aviation tycoon Howard Hughes made a rare visit to London, staying at a Mayfair hotel on Park Lane. 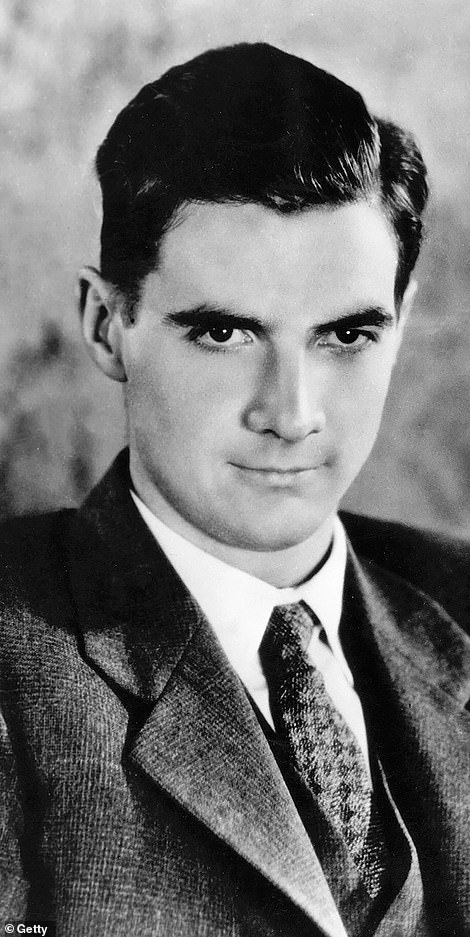 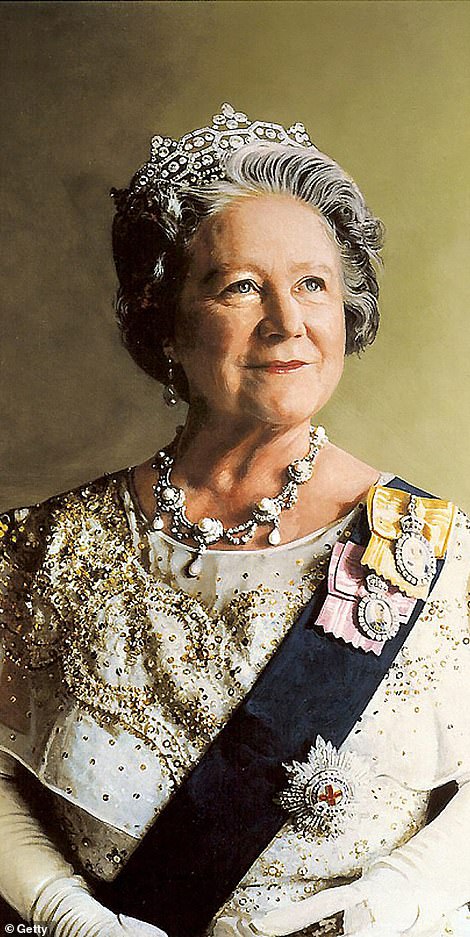 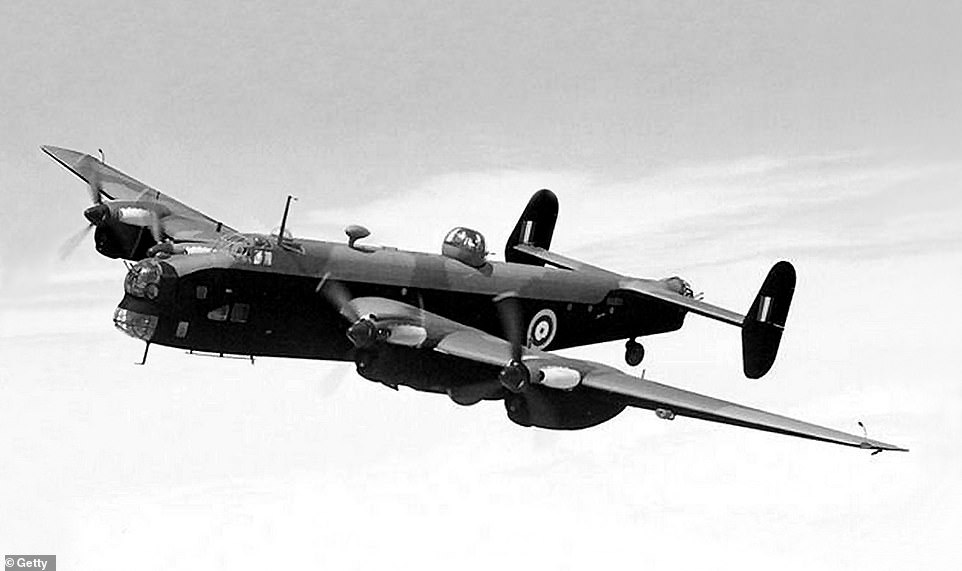 Whilst there he visited Sir Frederick at 18 Grosvenor Square to discuss his Hughes Aircraft Company acquiring Handley Page Limited; but despite hours of negotiations, a deal was never agreed.

After his death, Handley Page Limited went into decline, going into liquidation in 1970 – despite a highly publicised approach by Howard Hughes to try to rescue the company.

‘This is an exceptional trophy property, which would serve as an excellent long-term investment and main London residence.’

Who was Sir Frederick Handley Page? 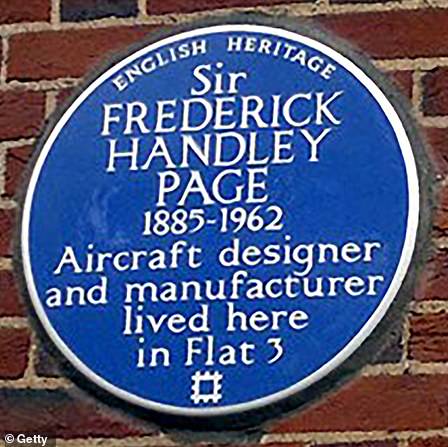 Born on November 15, 1885 in Cheltenham, Sir Frederick trained as an electrical engineer before turning his interest to flight.

He married Una Thynne in 1890 and the couple had three daughters – Helen Anne, Phyllis and Patricia.

He went on to design the V-1500 four-engine bomber, which was built to fly from England to Berlin laden with three tons’ worth of bombs. However, the war ended before it could ever be used.

In 1919 Handley Page Transport Ltd was formed to conduct airline flights from Britain to France, Belgium, the Netherlands and Switzerland. It later merged to form Imperial Airways.

The Handley Page Victor B.2 – a long-range medium bomber – was deployed with the Royal Air Force Bomber Command beginning in 1962.

In 1942, Sir Frederick was knighted for his contribution to the war effort.

He died in April 1962 in Grosvenor Square, at the age of 76 and was buried in Westminster. 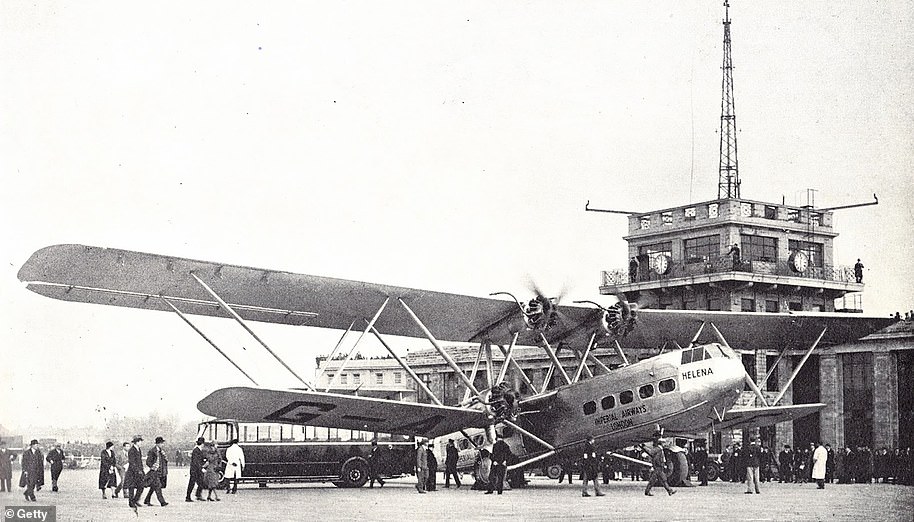