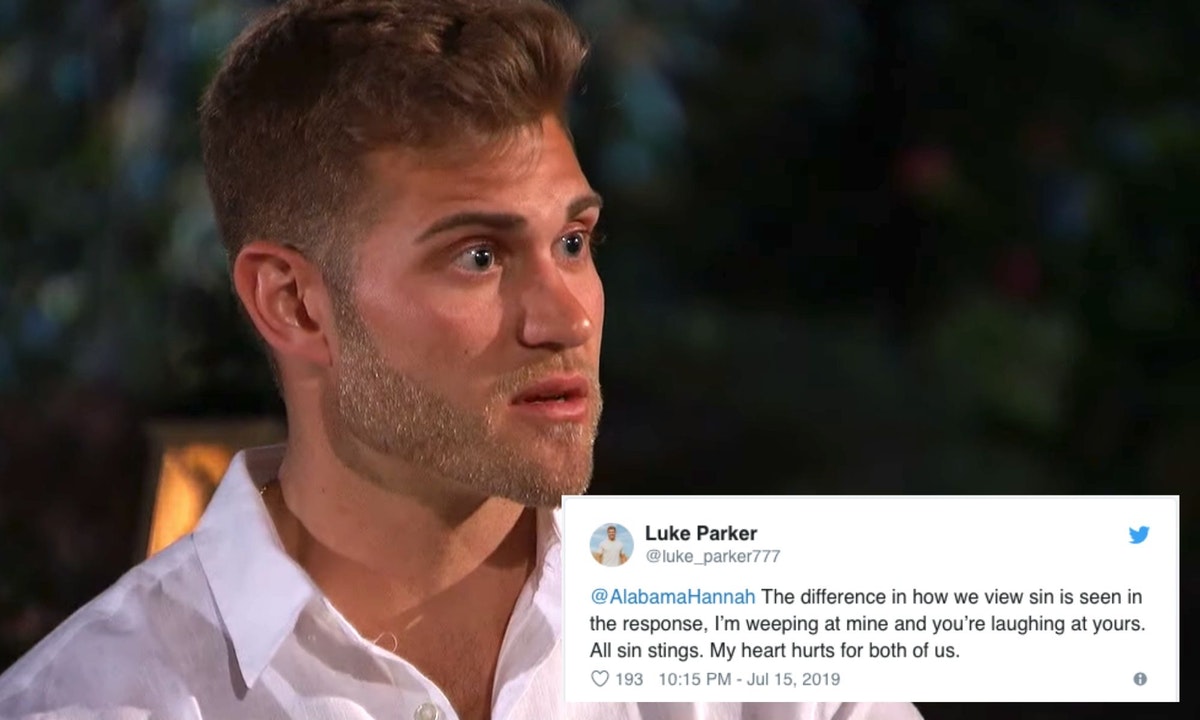 Luke P. was a polarizing Bachelorette contestant from the get-go, and when he finally got what was coming to him during Monday night’s episode, he didn’t take it lying down. After he judged Hannah, saying he’d remove himself from the competition if she’d gotten physical with the other men in the house, he was sent home. But he didn’t stop there Luke then tweeted about his Bachelorette elimination, and if you were expecting an apology or any semblance of regret for how he handled himself, you’re about to be disappointed.

Essentially, Luke told Hannah he’s heard other Bachelor/ette contestants proclaim their religion and their faith, and then talk about having sex during Fantasy Suite dates. Being a Christian who has sex in the Fantasy Suites simply isn’t an option in Luke’s mind — even though that’s a personal decision made by consenting adults, and therefore completely OK — and he wanted to make sure Hannah wasn’t going down a path he deems "sinful."

She snapped on him, saying it was unfair that she’s forgiven so much of his bad behavior only for him to make her personal sexual decisions a deal-breaker. "Honestly, you’ve already broken my heart with this, truly. I’ve broken my own heart because I’ve allowed everything," she said. "To ignore all the red flags for how I feel, to have this and to have you say this about me, and make me feel like you’d look at me any differently and judge me, or make me feel like you would not think of me as a woman of faith like I am, and that we weren’t on the same page… You’re holding everyone to a standard that you don’t even abide by."

He responded with a tweet Monday night as it aired, tagging Hannah:

Luke then took to Instagram with a lengthier post. However, he still didn’t outright apologize, and kept the focus on his feelings ("it hurt my heart") rather than Hannah’s. He wrote:

He also slammed Jed, who earlier in the episode had told Hannah he didn’t like that Luke was still in the picture. Jed wasn’t sure he could trust in his own relationship with Hannah when she was still pursuing someone like Luke, who had done nothing but be a headache for everyone around him. But Luke said Jed, and none of the other men, took the time to properly get to know him.

And otherwise, the only other thing Luke said was that he was staying mum about what went down that night because he felt it made him an easy target for people looking to bully him.

Let’s be clear. Should anyone make fun of Luke because of the fact that he’s a Christian, or because he has certain feelings about how he wants to handle his *own* sexuality? No. Should viewers be free to question how he wields that faith in a judgmental way, how he harshly condemns people like Hannah who have allowed him endless empathy and second chances? Absolutely.

Previews have shown that we’re somehow not done with Luke just yet. And the Men Tell All is next week, too. Maybe when he appears on that stage, Luke will have something different to say about his behavior. But based on his tweets, don’t hold your breath.