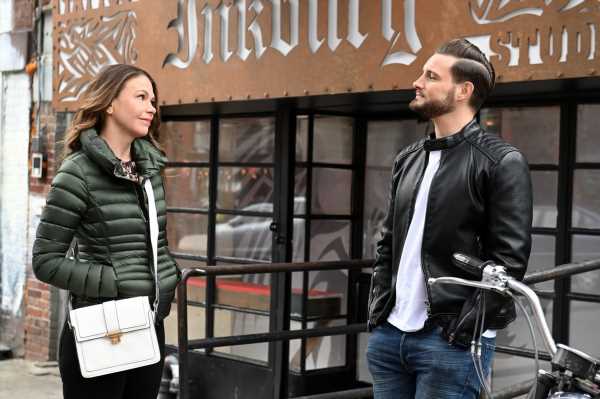 Liza, Josh, and Charles have been oddly coexisting in peace for some time now on Younger so of course, something had to change. After a photo of Liza and Josh was used for a national ad campaign, she hopped on a plane and crashed Charles’ business trip in order to explain. By the end of the Younger episode, Liza told Charles that she will not see Josh anymore in order to quell any suspicions he might have.

That picture in question was taken on set for the fictional clothing brand Infinitely 21’s. The two were in a pretty innocent conversation, but no one could deny the obvious chemistry between them, which is why that one photo was the basis for the entire ad campaign. The picture was everywhere, but Liza didn’t call or text Charles to discuss it. Instead, she purchased a last minute plane ticket to tell him in person that it wasn’t a big deal. And, spoiler alert, that made it a way bigger deal than it actually was.

Charles told Liza, "Everybody’s got a past, but in order to have a future, you move on from it" and that’s when Liza decided to cut off her friendship with Josh. Viewers know about this, but Josh doesn’t yet. Presumably, he will next episode though.

Soon after Liza’s love triangle with Josh and Charles came to a close, she and Josh became "just friends" last season. Josh is even close with Liza’s roomie Maggie and Liza’s other friends Kelsey and Lauren. How is Liza going to avoid Josh if he’s hanging with her friends — and in her own apartment — all the time?

Is this even a good thing for Charles and Liza’s relationship? Isn’t it a red flag that Liza couldn’t just dismiss the photo as a candid picture of two "friends" via text or phone call? Why did she go out of the way to fly to Charles if the photo wasn’t actually a big deal? Probably because it was one.

The Infinitely 21 execs saw the chemistry between Liza and Josh because there’s an undeniable ease to their rapport. In contrast, Liza and Charles are trying so hard to make their relationship work. He gave up his company before ultimately returning. Charles even stood up for Liza when his ex-wife Pauline exposed Liza’s true age and challenged their current child custody arrangement as a result.

There’s something to be said about getting through tough obstacles together, but should it really take this much effort to make a relationship work? Especially when things might be way easier with someone else…. and the whole country can see it?

Not only that, but now Josh is in a real bind since Clare got offered a Senior Project Manager position at Google in Los Angeles. This means that she might take their daughter Gemma with her and is most likely hinting at some tough times for Josh’s custody agreement in the near future.

It seems like an obvious setup for Josh to "lean on" Liza for help… except that he doesn’t know Liza is not seeing him anymore.