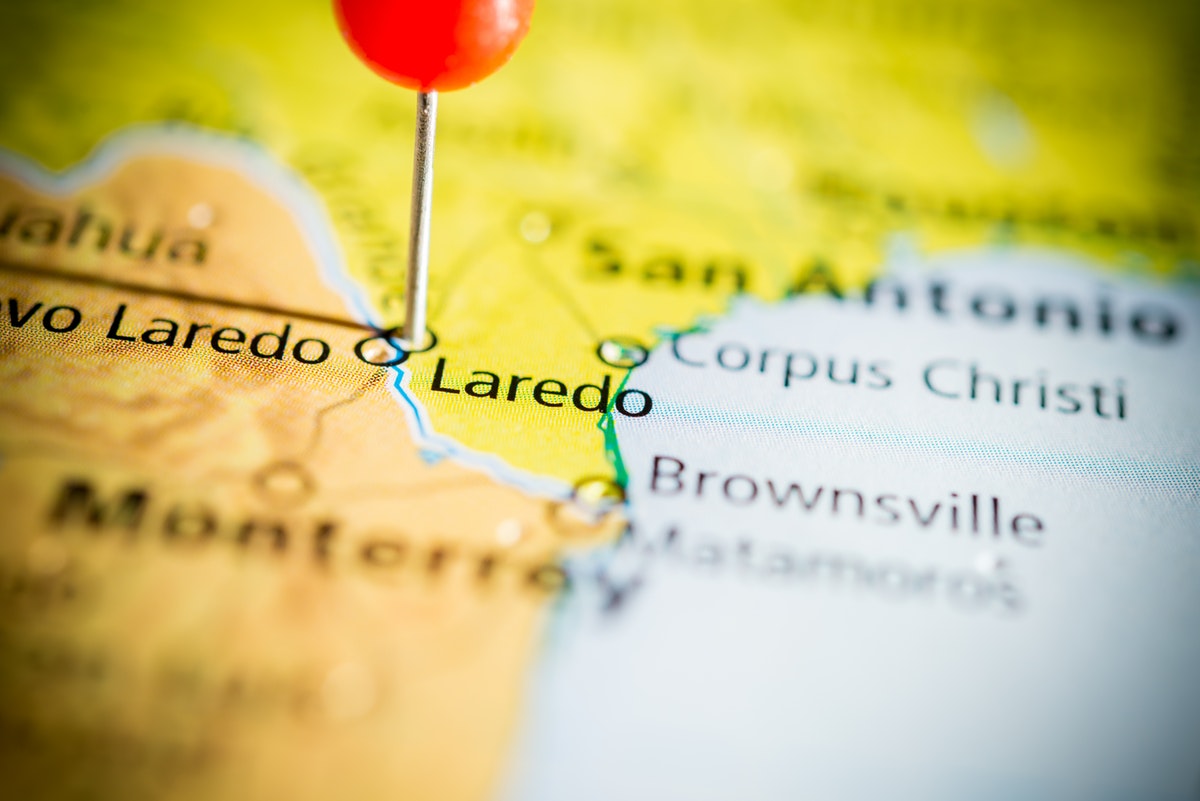 The first time I went across, I was a senior in high school. We had all borrowed outfits from our one friend who had going-out clothes, so we looked like a string of paper dolls: four slips of girls in tight black tops and low-slung jeans. Straightened dark hair, slivers of hips and belly, the wink of silver chain belts.

I was nervous. I wasn’t allowed to go across, though things weren’t bad yet, not the way they would become.

We parked near the Greyhound station downtown, the same station where we dropped my Ñaña off so that she could visit her late husband’s family in Mexico. Ñaña had been a part of our family since my mother was born. She had lived with us my whole life. I imagined her diminutive face in the kitchen window, the iron waves of her hair, her stern and elegant cheekbones. She would not want me going to Nuevo Laredo, either.

Though it was November, I remember the air being stifling and muggy, a sharp reek of gasoline and sulfur as we crossed the pedestrian bridge. The Rio Grande was a black cat purring at our ankles.

We crossed a small plaza with uneven stone pavers, arms linked, laughing. There was a fountain, the sizzle of bacon and onions from a hot dog cart. We went to a bar called Emiliano’s. It was a small cantina, loud and friendly. I didn’t drink alcohol yet, so I ordered a Mexican Coke, sipping it from a long slim glass with a wedge of lime. What I remember most about that night is how dazzlingly grown-up I felt, my friends and I laughing in a bar in Mexico.

I was born in Laredo, Texas. According to the 2018 U.S. Census, 95.4 percent of Laredo’s 260,000 residents are Hispanic or Latinx, 3 percent are white, .6 percent are Asian, and .4 percent are Black. Ninety percent of the population speaks a language other than English at home. A US2010 study by Brown University found Laredo to be the least ethnically diverse city in the country.

Once, someone told me the most beautiful women in the world come from Laredo. “You know why?” he said. “Because they’re confident. They don’t know how other people see Mexicans.”

In less problematic words, Laredo is a bubble. One in which a national minority enjoys the privileges of the majority.

Let’s make one thing clear, though: Laredo’s population in no way signifies an invasion. Rather, it’s a reminder of the tug of war some places endure before being folded into — or held at the margins of — a country’s identity.

Located on the northern bank of the Rio Grande, Laredo was founded in 1755 as a colonial city of New Spain and became a Mexican city in 1821. The Republic of Texas, which won independence from Mexico in 1836, tried to claim Laredo after the fall of the Republic of the Rio Grande in 1840. But it wasn’t until the Treaty of Guadalupe Hidalgo in 1848 that the Rio Grande officially became the border between the U.S. and Mexico—making Laredo, by default, a part of Texas. (Texas itself had only been a part of the U.S. since 1845.) Those who wanted to maintain Mexican citizenship moved to the southern bank of the Rio Grande. That city was named Nuevo Laredo.

We just called it “across.”

When I was growing up, almost everyone went across. They went to visit grandparents or to celebrate their cousin’s quinceañera. They went to eat at the Cadillac Bar or to get cheap antibiotics. In high school, kids who were much cooler than I went to drink. Every February, as part of a month-long celebration of George Washington’s birthday (which started in 1898 as a way to encourage American patriotism on the border) two children from the U.S. and two from Mexico exchange an abrazo — a hug — on the international bridge, symbolizing unity between our sister cities. Until cartel violence made the southern side of the border dangerous for both Mexicans and Americans, Laredo and Nuevo Laredo were like hands intertwined.

When I was a child, my parents took us to lunch at the Chick-fil-A at Mall del Norte almost every Saturday. After lunch, we went to B. Dalton. It was small, tucked into the far quiet end of the mall, and smelled like paper and possibility. I sat on the worn carpeting in the back, searching for titles of the series I loved — Sweet Valley High, Fear Street, The Babysitters’ Club, and Nancy Drew. As I got older, it was books by Mary Higgins Clark, Robin Cook, Dean Koontz, and John Grisham. Then I discovered Jane Eyre, passing through a dreamlike portal to Literature with a capital L. That was when I became, in my mother’s teasingly accurate words, a "book snob."

I had been a writer for nearly as long as I’d been a reader. When I was 15, my parents gave me my first laptop, an IBM ThinkPad with a velvety red Trackpoint nub. I lugged it everywhere that summer — to my mother’s office, where I wrote in between filing and answering phones; to my grandpa’s house on Sundays, where, after our lunch of fajitas and chicken and rice and beans, I set up on an antique desk among ancient Archie Comics and wrote with the clatter of my cousins playing pool behind me. I finished my first novel on a night the house was slumbering and soft. I placed my head on my desk and laughed through my tears.

I’d written countless stories by then, spanning a wild array of plots and themes, with two things in common: they were set in nameless cities, and my characters had no last names.

In seventh grade, our class read The House on Mango Street, by Sandra Cisneros. It was the first book by a Latina author I’d ever read, and I remember being surprised that a character could be named Esperanza:

"In English my name means hope. In Spanish it means too many letters. It means sadness, it means waiting. It is like the number nine. A muddy color. It is the Mexican records my father plays on Sunday mornings when he is shaving, songs like sobbing."

Reading The House on Mango Street felt different to reading To Kill a Mockingbird or Heart of Darkness. It felt familiar. And because of that, I’m ashamed to say, a part of me questioned whether it was “real” literature. How could it be, when it was—that we knew of, at least—the only one of its kind?

It was 1996. Six years earlier, Oscar Hijuelos had won the Pulitzer prize for Mambo Kings Sing Songs of Love, “raising the possibility that Latino writers in the United States could at last find a wide audience for their work,” according to a New York Times piece written at the time. The writer notes:

"However ill defined, Latino literature exists, sometimes eloquent, often crude, now and then with more vitality than almost anything else being written in America. Yet it remains secret, available mostly in ghetto bookstores and arcane corners of college campuses."

Sometimes eloquent, often crude. If this is what our allies said about Latinx literature in 1990, one can imagine the detractors. It’s no wonder a Mexican American child who read hundreds of books could go 12 years before seeing a character named Esperanza.

Cisneros remained the only Latina author I read until college, when I encountered Gloria Anzaldua and Carlos Fuentes, Borges and Cervantes. I was stunned to see, for the first time since Cisneros, not just Spanish but Spanglish. And an exploration of the border that was sharp and luminous, exacting and exciting. In Borderlands/La Frontera, Anzaldua writes:

"The U.S-Mexican border es una herida abierta where the Third World grates against the first and bleeds. And before a scab forms it hemorrhages again, the lifeblood of two worlds merging to form a third country — a border culture. Borders are set up to define the places that are safe and unsafe, to distinguish us from them. A border is a dividing line, a narrow strip along a steep edge. A borderland is a vague and undetermined place created by the emotional residue of an unnatural boundary. It is in a constant state of transition. The prohibited and forbidden are its inhabitants."

For the first time, I began to consider that I might come from somewhere interesting. A place with something to say. I began to pay attention to the cadences of speech I’d always taken for granted, to the confetti of wildflowers that bloom on the heat-stricken highway median for two weeks in spring, to the cultural complexities of what Anzaldua called this “third country.” I began to see my own home differently.

I was in graduate school when I read Gabriel García Márquez for the first time. The iconic first line of One Hundred Years of Solitude echoes within me even now: "Many years later, as he faced the firing squad, Colonel Aureliano Buendía was to remember that distant afternoon when his father took him to discover ice."

I fell in love with that novel in a different way than I had any before it. I recognized something in it — the musicality of the language, the way magic and reality blended into the everyday. I thought of how Ñaña had rolled an egg over my forehead as a child, murmuring in Spanish to combat the ojo. The story of my dad’s guardian angel, whose robe he saw fluttering just as his attackers’ eyes widened, their weapons dropped, and they fled back to their car, and how my dad turned to see nothing, absolutely nothing, behind him. The messages in dreams, the voices and images of family who have passed, the way these stories are told and accepted and understood.

I returned to the novel I had been revising ever since finishing the first draft at 15. I finally realized why it wasn’t working: it was set nowhere, in a generic city with no defining characteristics. And without a sense of place to inform the characters — their roots and biases, memories and regrets — the characters were not universal. They hardly existed at all.

For so long, I’d thought I needed to appeal to the "average reader." I did not consider that I assumed the average reader was white, and, therefore, that a white reader would neither understand nor care about Mexican American characters in a Texas border town. I did not consider that accepting white as the default suggested that I did not believe we were worth writing about. I never felt worthless. I felt smart and valuable and valued. I simply didn’t think about any of this at all, which is the greatest danger of not seeing oneself represented in books — an unconscious exclusion from your own imagination.

But the publishing industry has a lot of work to do: though data on adult books is scant. According to the Cooperative Children’s Book Center, only 7 percent of children’s books published in 2018 were by and about Latinx people. In 2016, a Lee & Low survey found that 79 percent of staff among 35 publishers and eight review journals identified as Caucasian. Until publishing embraces diversity from within, I worry that my own daughter will go years in between seeing the Mexican half of her reflected back in books.

When I was a child wandering aisles in bookstores, I liked to imagine my own books on the shelves one day. I would publish under a pseudonym, I’d decided. Kate York. York is my mother’s maiden name—her grandfather or great-grandfather came from the northeast. Kate York had that Nora Roberts feel. It was sophisticated and easy to pronounce. It was, I see now, white.

My married name is Collins. I’m proud to be a member of the Collins family, and for my husband, daughter, and I to share a last name. Collins is now a part of my identity.

But I publish under Gutierrez.