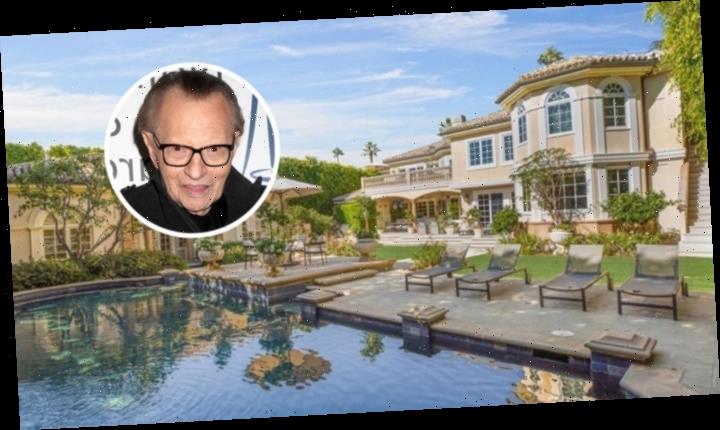 In the wake of a surprise divorce filing in early 2019, after almost 22 years of marriage, veteran radio and television broadcaster Larry King has sold an opulently appointed Beverly Hills mansion for $15.5 million. The recently recorded sale price is a notable bit under the slightly shy of $17 million price tag but still a small fortune above the $11.75 million tax records show the 86-year-old, two-time Peabody winning former nighttime interview program host (“Larry King Live”) and his about-to-be seventh ex-wife Shawn Southwick King, who has said she was “blindsided” when she learned about the divorce filing from a reporter last year, plunked down for the not quite half-acre spread about 13 years ago.

A stone-columned arched loggia outside the kitchen and separate breakfast room looks out over a not especially big but privately high-hedged, verdantly landscaped and fastidiously maintained backyard that features evergreen faux-grassing, manicured plantings and extensive stone terracing around a dark-bottomed swimming pool.

The listing was held by Kurt Rappaport at Westside Estate Agency; The buyer was repped by Greg Dean of The Dean Company.