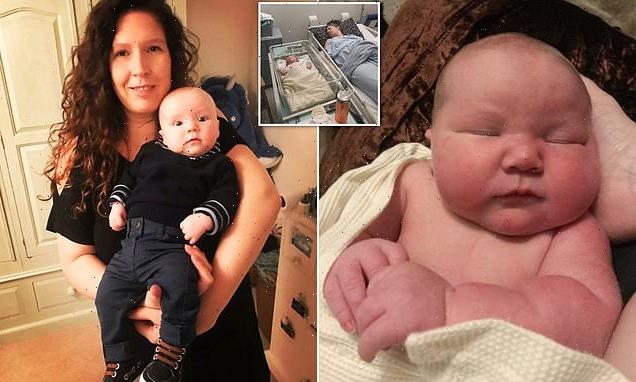 Oh boy! First-time mother who gave birth to 12lbs son by Caesarean reveals how she had to dress him in clothes for a six-month-old and says even the midwives gasped when he emerged

A first-time mum was shocked to give birth to a whopping 12lb baby.

Fiona Hamilton-Currie, 40, who lives near Tunbridge Wells, Kent, was left with no choice but to dress her newborn son Buddy in six-month-old clothes because he was so big.

Buddy was delivered via c-section in February 2021, and even the nurses and midwives gasped when he came out.

The mum, who works as a manager at an e-cigarette company, was unable to lift her son up for the first six weeks.

Now, nine months on, Buddy remains above average, currently weighing the same as a 20-month-old baby. 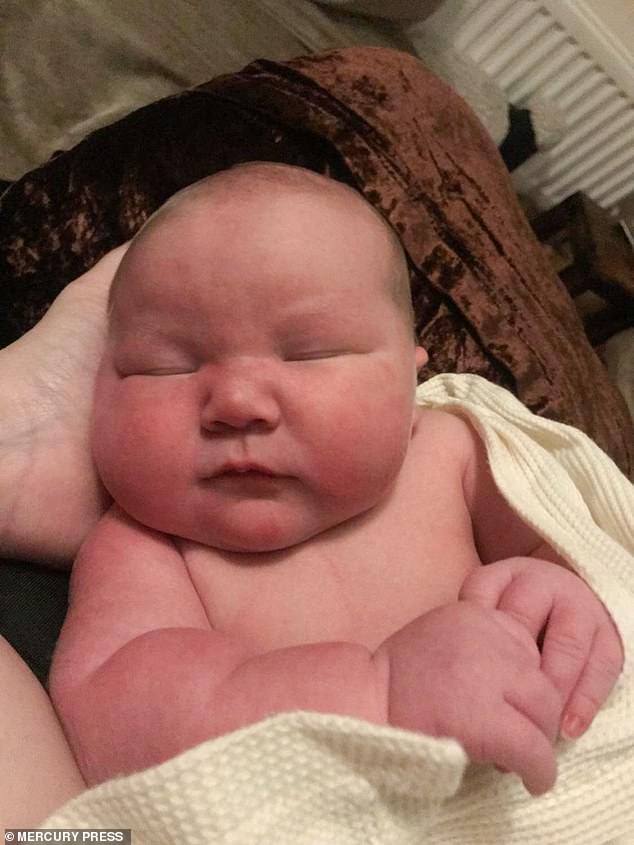 Fiona Hamilton-Currie, 40, who lives near Tunbridge Wells, Kent, gave birth to Buddy who weighs a whopping 12lbs, and even the nurses and midwives gasped when he came out 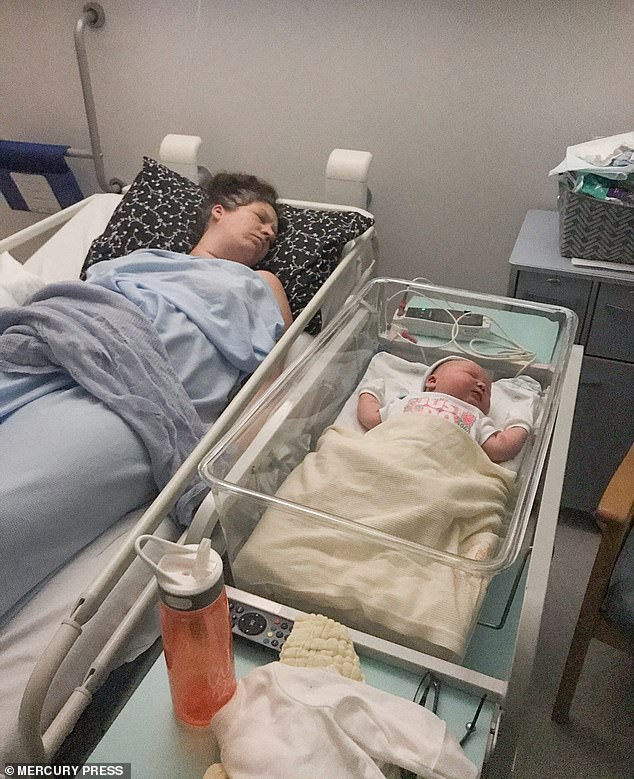 Fiona Hamilton-Currie, 40, with Buddy in hospital. The new mother was left with no choice but to dress her newborn son Buddy in six-month-old clothes

Fiona said: ‘Normally, newborns drink 10-30mls of milk, but he was having 75ml, so we had to take him to be weighed to make sure he was on track.

‘My midwife had been doing her job for 30 years and said he’s the biggest newborn she’s ever seen.

‘I knew he’d be big when I was pregnant, but no one believed me.

‘I had a massive bump, and towards the end of the pregnancy I was just hobbling around, going from one surface I could lean on to another. 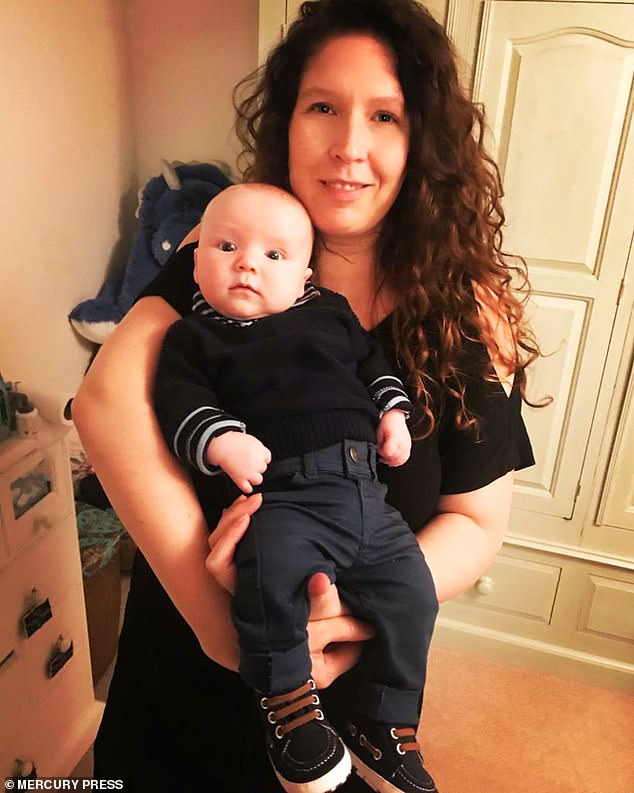 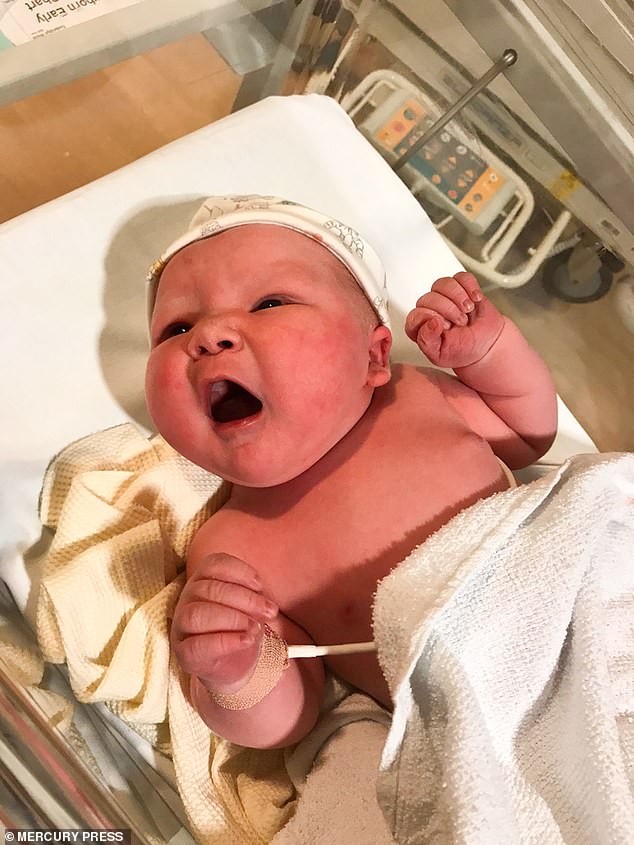 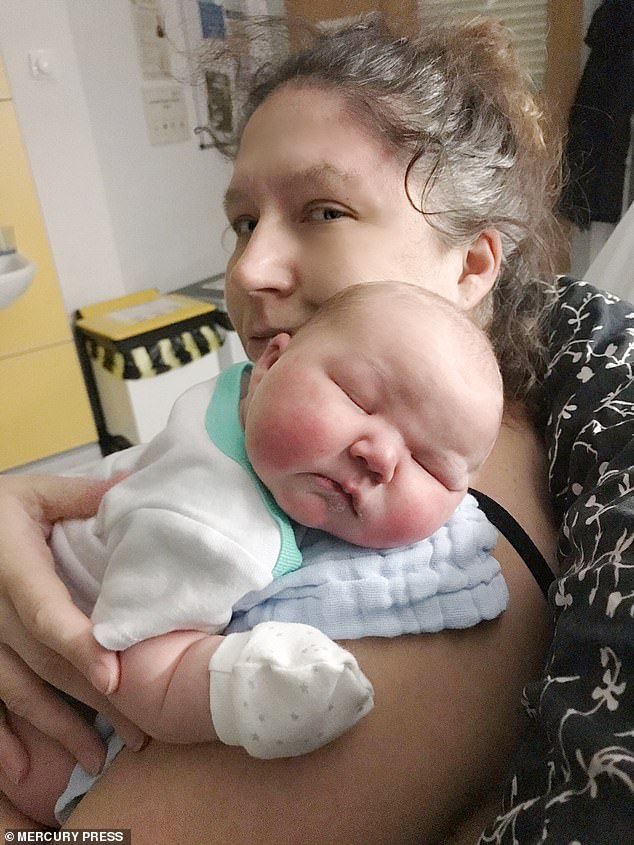 When Buddy arrives, doctors kept coming in to look at him because they’d never seen such a big newborn

Buddy is now nine-months-old and thriving. His mother jokes she can’t wait to embarass him with the story of his birth when he’s a teenager 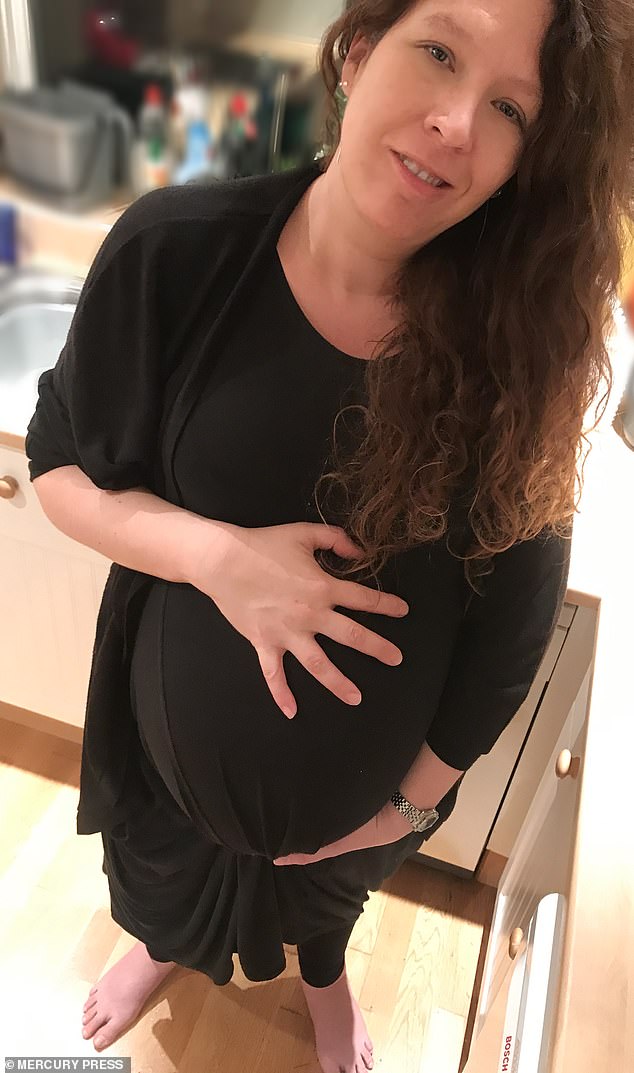 During her pregnancy, Fiona had ‘massive bump’ and towards the end she was hobbling around and leaning on surfaces for support 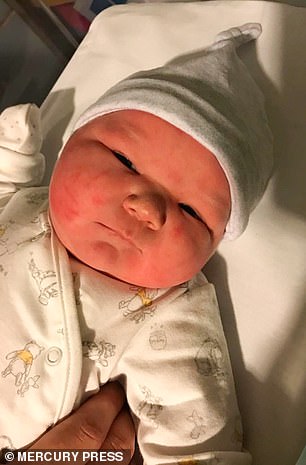 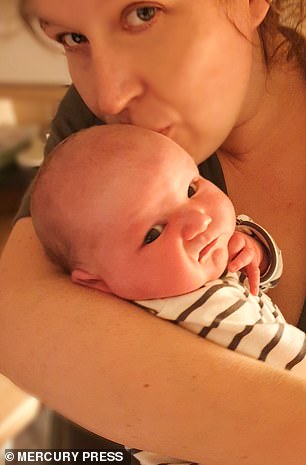 Buddy went straight into outfits for a six-month-old and never got to wear any of his newborn clothes. Luckily Fiona (pictured with Buddy) had a friend with a newbnorn she could pass on his unworn baby clothes to

‘Once he was born, everyone was so helpful making sure I knew what to do with a big baby.

‘Doctors kept coming in to look at him because they’d never seen such a big newborn.

Buddy’s a bouncing baby – but he’s not the biggest!

The heaviest baby ever born in the UK was 15lb 8oz Guy Carr, from Barrow-in-Furness, Cumbria, who was welcomed via caesarean section in 1992.

George Joseph King, who arrived on February 11 in 2013, is thought to be the biggest baby born naturally in Britain.

He weighed a staggering 15lb 7oz (more than double the average newborn weight of 7lb 8oz) when he was born at Gloucester Royal Infirmary.

In December 2017, Brodey Young became the heaviest baby born at a hospital in a decade, tipping the scales nearly 13lb.

He weighed in at 12lb 130z – nearly the same as a bowling bowl, stunning midwives and doctors on the Blueberry Ward at Diana, Princess of Wales Hospital in Grimsby – and his mother Sheralyn Wilcock, of Cleethorpes.

According to the Guinness Book of World Records, the heaviest baby ever born was the son of Canadian giantess Anna Bates (née Swan) who gave birth at her home in Seville, Ohio, on January 19, 1879.

‘When you have a c-section, you’re told not to lift anything heavier than your baby, but I couldn’t even lift him he was so big.’

The tot, who was the same weight as a gallon of paint at birth, is now 24 pounds.

Fiona said: ‘A c-section wasn’t the plan, but my heart rate was very low and Buddy’s stopped on the monitor when it came time to push.

‘I was put under general anaesthetic for an emergency c-section, so I wasn’t conscious when the nurses pulled him out, but afterwards they said there was an audible gasp.

‘My partner, Graham, 46, wasn’t allowed in the room, so neither of us saw the moment he came out.

‘I always picture it like in Mary Poppins, when she pulls the lamp out her bag – as the midwife pulled him out and he just kept going.

‘I want to share his birth story so I’ve got something to embarrass him with when he’s 18!’

Fiona was left with clothes for a newborn baby that Buddy was never able to wear, which she was able to give to another pregnant friend.

She said: ‘Luckily, when I went into the hospital, one of my friends recommended bringing some slightly bigger clothes.

‘I had a few newborn outfits, and one for zero to three-month-olds, and that was the only thing that fit him.

‘Even that was like a sausage skin on him, and the outfit had a hat that we just had to balance on his head because it didn’t fit.

‘When we got him home it was straight to three to six-month clothes for him.’