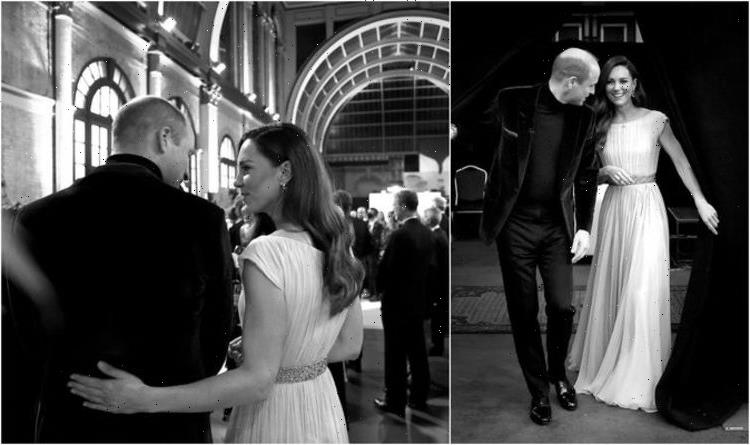 The photos, which were in black and white and taken by Chris Jackson for the Royal Foundation, showed Kate Middleton and Prince William in very tender and loving poses. The Duke and Duchess of Cambridge normally steer clear of public displays of affection, rarely holding hands in public, following in the example of Prince Charles and Camilla, and also the Queen and the late Prince Philip. However, these photos from the Earthshot Prize Awards showed a different and rare side to the Cambridges’ which was embraced by royal fans.

One picture showed Kate placing an arm around William’s waist, who was getting closer to her to hear her speak.

A second snap showed the Duke of Cambridge in the darkness waiting to get on stage.

A third photograph saw Kate and William leaning against one another as they walked through the curtains at Alexandra Palace.

These intimate snaps were welcomed by royal fans, with many calling them “beautiful” and “adorable”.

Another royal fan, Jordan Gropp, focused on Kate and William’s love, saying: “I love this so much… their admiration and affection for each other cannot be faked.

“I’m grateful that in spite of the chaos that is their family, these two continue to lead with love.

“It’s nice to see such genuine care and authenticity exude from them”.

A fan account, Cambridge4Life, said: “They are gorgeous! Thank you for sharing!”

Judi James, a body language expert, analysed Kate and William’s actions from the Earthshot Prize Awards and why the couple seems to be more affectionate with each other as of late.

Judi said: “William and Kate look far more openly romantic than usual here at the Earthshot awards and as a result, as well as a result of Kate’s growing confidence and power signals in public, we can see her performing the kind of back-touch gesture of affection that we always see a lot from Meghan.

“This suggests it is a desire for communication, pulling him slightly closer, as well as a signal of support.

“Meghan’s back-touches often tend to be higher on Harry’s back and tend to occur when she is walking slightly behind him.

“They look like a tender reminder that she is there backing him up and offering reassurance and even direction.”

After the photos of the Duke and Duchess were made public, Chris Jackson tweeted how “grateful” he was for the opportunity to photograph the couple.

He said: “Grateful for the opportunity to document some of the energy and passion that went into this groundbreaking event that will change the climate change narrative for the foreseeable future.”

He wanted to raise hope about the climate crisis. William is aiming to inspire award organisations, countries, and individuals to find solutions to the most pressing environmental issues.

This initiative will last for 10 years and five winners will be awarded £1million every year until 2030.

The royal line of succession – who outranks who?

The line of succession to the British throne dictates the order in which each member of the Royal Family would ascend to the throne.

It is also seen as a ranking of importance with the head of the line, the Queen, taking the place of ruler.

Older children come before younger children. Traditionally boys came before girls, but this law was changed on March 26, 2015 before the birth of Prince William’s first child.

Incredibly, Catholics are still excluded from the line of succession, as are children born outside of wedlock.

The royals, who usually stick to a strict protocol when appearing in public, often arrive at events in ascending order of importance, with the most important royal arriving last.

Prince Charles, 72, is currently first-in-line to the British throne, followed by Prince William, 39, his oldest son.