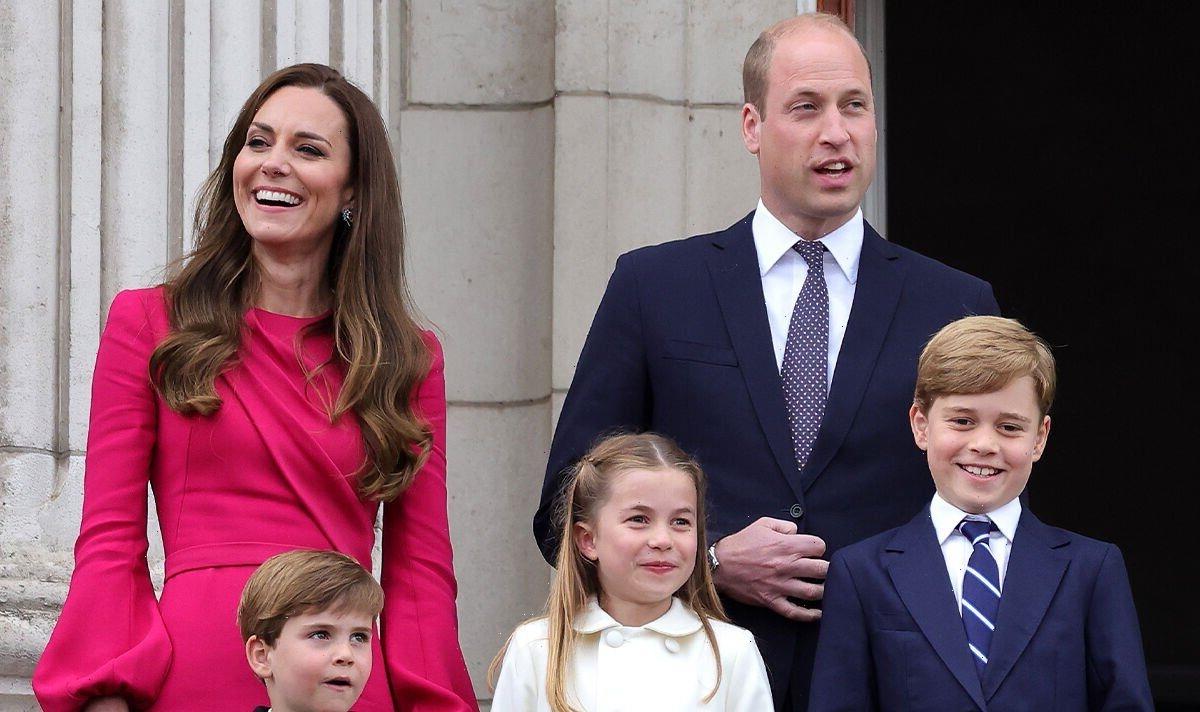 Kate blows a kiss to Prince Louis during Jubilee Pageant

Prince George, Princess Charlotte and Prince Louis joined their royal parents for several key events during the Platinum Jubilee celebrations last week. Despite the long hours and crowds of people, the eight, seven and four-year-old respectively were incredibly well-behaved, and Kate and William scored top marks with commentators for their “modern” parenting style.

Royal expert Jennie Bond told OK!: “I think William and Catherine are making a good job of giving their children as much of a normal upbringing as possible.

“The family dynamics look to be very normal. They both, William in particular, have spoken before about the importance of mental health and giving their children emotional intelligence and the space to tell their parents how they’re feeling and what their emotions are.”

Ms Bond added that Kate and William follow “modern” parenting ideas, stating: “I’ve read that they have a very modern way of parenting where, instead of putting your child on the naughty step, you allow your child to explain why they feel how they do and have a conversation about it so they can express themselves and calm down that way.

“The result seems to be that they are children who are broadly well behaved.

“Louis didn’t misbehave over the Jubilee, but he was mischievous as four year olds are.”

Prince Louis emerged as the star of the show during the Platinum Jubilee, with his playful antics prompting a lot of laughter among royal fans.

During Trooping the Colour, Louis even prompted a smile from the Queen as he covered his ears when the jets flew over Buckingham Palace during the RAF flypast.

At the Platinum Jubilee Pageant, Louis was seen covering his mum Kate’s mouth at one point and making a series of comic gestures.

But adorable moments where Louis flung himself into Kate’s arms and onto his grandpa Prince Charles’ lap were also in abundance during the celebrations, proving what a tight-knit bond the Cambridges have with their royal little ones.

Early years development is a key part of the Duchess of Cambridge’s royal work, with the future Queen establishing The Royal Foundation Centre for Early Childhood.

Kate embarked on a working visit to Denmark earlier this year to hear more from the world leader in the field about how the UK can improve its support for parents and children.

Over the Jubilee weekend, Prince William also courted significant praise for his empathy with his daughter Princess Charlotte.

When the young Princess looked to be flagging at the Platinum Jubilee Pageant after a jam-packed weekend, William was spotted stroking her hair and giving her lots of reassurance.

Royal fans have expressed praise on social media for Kate and William’s parenting, with Twitter user @prince_scarf tweeting a picture of William smiling at his son Prince George during the celebrations, adding: “I love seeing Prince William with his kids”.

While @kittannkat wrote on the platform: “Great parenting by Kate.

“To me; Prince William and The Duchess are incredibly great parents; especially being in the public eye and teaching their children how to conduct themselves”.