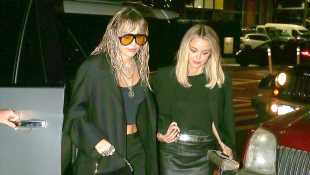 Kaitlynn Carter and Miley Cyrus are reportedly living together and Kaitlynn is hoping it’s a long-term arrangement. Here’s why she wants to be with Miley ‘for a long time.’

Kaitlynn Carter and Miley Cyrus were spotted moving in together in the Hidden Hills area of Los Angeles, and Kaitlynn, 31, couldn’t be happier with the “Wrecking Ball” singer, 26. But the pair haven’t had much time to get comfy in their California abode, because it’s New York Fashion Week!

“Kaitlyn and Miley are in New York together both doing their thing for fashion week,” a source tells HollywoodLife EXCLUSIVELY. “They are staying together and spending their free time together but they’ve both been very busy with work so there isn’t a ton of down time. But whenever they’re not booked, they’re together. They stay in a lot, they’d rather have friends over, it’s just more private.”

While work has taken priority for now, the star of The Hills: New Beginnings is looking forward to the long-term. “There is a glow that Miley surrounds herself with that people see when they hang out with her,” another source tells HollywoodLife “It is one of the main reasons Miley is such a star and for Kaitlyn to be with Miley in her stratosphere is so enjoyable to her and so exciting. Kaitlyn thought this was just going to be some sort of fun fling but it is now becoming much more important for her and this is something Kaitlyn wants to be involved with for a long time to come. Everything is really working out.”

The insider notes that it was basically love at first site for Kaitlynn. “Kaitlyn instantly was attracted to Miley’s complete uniqueness and her kind heart but now she has seen even more with how she performs and how she is out at events. She has seen the Miley behind closed doors and in front of the camera and Kaitlyn is so intrigued by her overall presence,” the source says. The first insider adds, “Kaitlyn couldn’t stop looking at Miley’s pics, she was like, ‘Dear God’. She thinks Miley is perfection on every level. Kaitlyn isn’t surprised by the hotness though, Miley exudes sex appeal at all times, those pictures just captured it very well.”