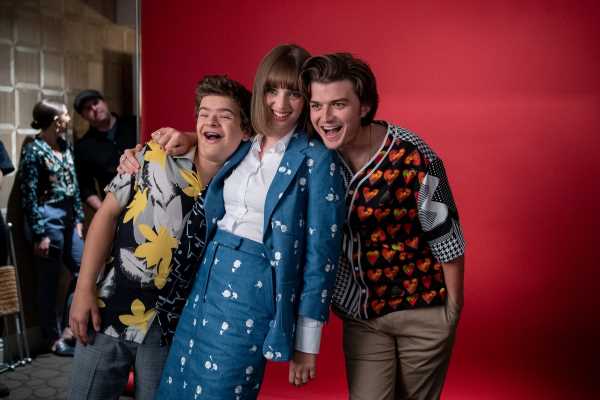 The kids of Hawkins will return to the Upside Down on Thursday, July 4 when Stranger Things 3 drops on Netflix. That said, it’s hard to call Noah Schnapp, Finn Wolfhard, Millie Bobby Brown, Caleb McLaughlin, Gaten Matarazzo, and Sadie Sink "kids" anymore. The young stars of the hit sci-fi series look like real grown up people now, and they’re ready to take on the darkness that’s coming in what star Joe Keery called “the darkest season yet.” The actor who plays Steve Harrington with the magnificent coif, has become the show’s beloved babysitter, and off-screen, Joe Keery revealed he loved watching the Stranger Things kids grow up.

In an interview with People ahead of the premiere with co-star Maya Hawke, Keery was asked what it was like to watch his co-stars mature. "Terrible," he joked. "I wish they would stay as little kids forever." He went on, saying, "They’re amazing. It’s really crazy because you come in the first year, and you’re not really sure if you’re going to work with these people again. And when you come back, these little kids are full -blown adults." Sounds like fans are in for quite the shock when they tune into the new season. But, it’s worth it, according to Keery, who concluded, "It’s been awesome to see them handle everything with such grace and be able to speak with such gravitas. They’re really smart."

And if Joe Keery is the off-screen big brother to the amazing kids, it’s David Harbour who’s their de facto dad. And no one is more emotional about the cast growing up than he is. During Build Series interview in April, Harbour discussed all things Stranger Things (that he could reveal, anyway), and he said his journey of watching the cast grow up was reflected in the show with Hopper and the gang, especially Eleven. "It’s all a process of Hopper letting go, and all these feelings that we’re feeling [in real life], we put into the show," he said. "It’s weird when you work with people who are genuinely becoming themselves in front of you." Harbour said that sometimes he feels like "a struggling dad saying, ‘Kids, it’s dinnertime,’" as the kids of the cast have matured and become rock stars and celebrities in their own right. "It’s just going to get weirder," he said.

And Hopper is in full dad mode in Stranger Things 3, as Mileven (Mike and Eleven) get together. The show’s creators, Duffer brothers Matt and Ross, told Entertainment Weekly that Stranger Things 3 is full of blossoming romance, and Hopper is having a tough time adjusting to the hormones. "Hopper is panicked about Eleven’s relationship with Mike,” Matt Duffer said. “How does he control the romantic whims of a teenage daughter?" There’s really no way to control the romantic whims of a teenage daughter, so Hopper will have to find a way to cope.

Though he doesn’t have children of his own, Harbour often jokes that he now feels like he has five. In an interview with the Hollywood Reporter in August, Harbour said that as Hopper evolves and becomes a father, so does he. "I don’t have a child. Everyone’s described this feeling to me — this love that they feel that’s beyond them, where you would genuinely take a bullet for this person. I do find that Hopper changes me as I play him."

Both Harbour and Keery are getting misty-eyed about their young cast mates growing up, so fans who have been watching since the beginning should probably keep a tissue box nearby when they press play on Season 3. The Stranger Things kids won’t be kids for much longer!