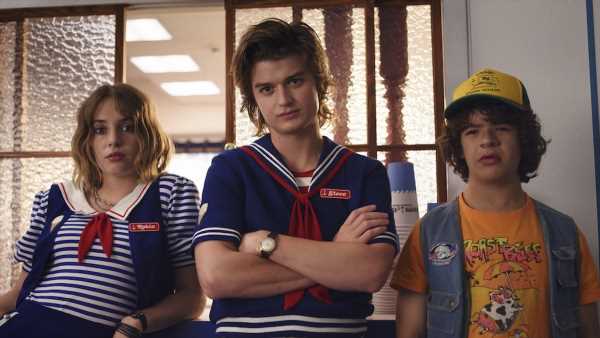 Hawkins’ beloved babysitter was booted from the Stranger Things group chat. According to a new Access interview, the Stranger Things’ kids kicked Joe Keery out of their group chat for a hilarious reason. Keery, who depicts fan-favorite Steve Harrington in the hit Netflix series, joined Access with co-star Maya Hawke on June 28 to discuss all things Stranger Things 3, which returns to Netflix on July 4. During the interview, Keery revealed that he was booted from the group chat with the cast’s core kids Noah Schnapp, Finn Wolfhard, Millie Bobby Brown, Caleb McLaughlin, Gaten Matarazzo, and Sadie Sink because he was "too old."

“I think there was a group chat in Season 2,” Keery said. “I’m not in any big group chat now but I think Noah was like [imitates excessive typing].” When Hawke added that “all the kids still have a group chat,” Keery replied, “We’re too old for that. We got booted.” The thought of Steve Harrington, who experienced perhaps the best character arc in the series, getting booted from the group chat is stranger than all the strange revelations put forth in the last two seasons of the series. But yes, there is a notable age difference between Keery, 27, Hawke, 20, and the rest of the kids, who range between the ages of 14 and 17.

Still, their youthful ages (whether on or off screen) certainly haven’t hindered the fight against the Shadow Monster. As fans will recall, Stranger Things 2 left off with the Mind Flayer leaving Will’s body and Eleven closing the gate in Hawkins Lab. During the Snow Ball, however, the scene pans to the Upside Down to show a more sinister threat looming underneath the school gym. As the trailer for Stranger Things 3 suggests, the fight against whatever lurks beneath the sleepy town is far from over. During their interview with Access, both Hawke and Keery teased that Season 3 is the darkest yet. Still, with the gore comes the series’ signature humor as well.

“I think it’s a season of extremes,” Keery said. “There’s like, the most funny stuff that happens and then also definitely the most scary.” Hawke added, “There’s some lift up moments.” In response to whether Season 3 possessed the scariest monster yet, Keery teased, “I think everything surrounding the supernatural… it’s gross. ‘Gross’ I think is the right word.” Promises of gore appear to be a common theme among cast interviews leading up to the premiere. During an appearance on Good Morning America, Keery’s co-star Matarazzo teased, “It’s definitely gorier, which is cool. If you don’t like gory stuff, watch it anyway… But it’s not for the faint of heart as some would say.”

While Hawke and Keery were booted from the group chat, the two still gushed about their experiences working alongside the series’ younger counterparts. “We just had such a wonderful crew, like Gaten and Priah [Ferguson, who depicts Lucas’ sister Erica Sinclair]," Hawke told Access. "Everyone was really funny… We were all really nice to each other, and we made little movies on set. We had a lot of fun. As much as the characters have in the show, we had — minus all the danger.” Keery echoed the same sentiments and said, “Yeah, working in the mall. Our storyline primarily takes place in this mall, so that was great.”

Their sentiments are so sweet. Can someone inform the group chat?