Jodi Picoult discusses her upbringing, career and the men who have influenced her. 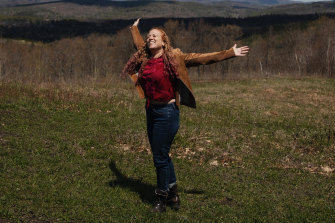 Jodi Picoult: “My mother, though, was the reason I started reading at three years of age.”Credit:Kieran Kesner/Headpress

My maternal grandfather’s name was Hal Friend. He was married to my grandmother, Bess Friend, which I just love. Hal grew up poor in the Lower East Side of New York, where my great-grandfather was a presser, which meant he ironed the gowns of rich women. He went to night school and got a degree in accounting. He also joined the army and served in World War II. After the war he moved with my grandmother to Long Island, where he lived to be 100.

My father, Myron, is goofy and does an impeccable Donald Duck impression. What I love is that he’s very silly in private, but when he worked he was one of the top three security analysts in the country, despite his grades being so bad that he had to go to night school at university. He met my mother, Jane, an A-grade student, because her sorority was teamed with his fraternity to work on a carnival. He fell in love with her at first sight and somehow convinced her that he was worth the risk.

Dad also did technical writing, so he’s probably the parent from whom I got the ability to write a clean sentence. My mother, though, was the reason I started reading at three years of age. She took me to the library and one of my first birthday gifts was a bedside lamp, so I could read in bed.

My first crush was Kal Raustiala in second grade. He had a jungle gym in his basement and I used to play on it. He also owned an iguana. I thought he was so cute. Years later I was asked about my first crush in an interview, and Kal saw it. Out of the blue he emailed me, and I met him for coffee while I was on a book tour in LA. He is a professor now and looked exactly like he did, only bigger.

I met Aaron while I was studying creative writing at Princeton University. At the end of my freshman year, his sister hired me to tutor him in French. Then one night, as I was leaving his room, he asked if he could kiss me. I said no. That summer we wrote to each other and I fell in love because of his writing. We dated for three years, but in my senior year he broke it off. I was a mess.

Tim, a friend from Princeton, phoned and said I should visit him in Cape Cod. He looked like a young Robert Redford. He was so beautiful. One thing led to another that weekend, and as I left I said it was okay if he didn’t call me, but he called as soon as I got off the plane. When I returned to my dorm, Aaron was in my room. He said he’d made a big mistake, but I couldn’t go back. I kept dating Tim, and we married in 1989, so clearly I made the right choice.

Tim is the only reason I have a writing career. I knew if I were to increase my productivity, I couldn’t be at home with our three kids. So he left work to be the primary caretaker. Each morning, freshly ground coffee awaits me when I go upstairs to write. I have absolutely hit the jackpot.

“I knew if I were to increase my productivity, I couldn’t be at home with our three kids. So he left work to be the primary caretaker. I have absolutely hit the jackpot.”

I knew my son Kyle was gay from when he was five years old. He used to point to the princes in Disney movies and tell me how pretty they were. He’s now 30 and I’m thrilled he’s found a partner he loves and who loves him.

I interviewed Joe Biden in 2018, following the publication of his book Promise Me, Dad, about his son Beau’s death from brain cancer in 2015. My husband, my niece and her boyfriend accompanied me, and Joe zeroed in on our lives. My middle son, Jake, was either studying for the bar exam or had just graduated, and Joe later called and left a message for him, which was the sweetest thing.

What I can tell you about Joe Biden is that he’s a good man: compassionate, honest and caring. And after the last four years of Donald Trump, I could not ask for anything more.

Wish You Were Here (Allen & Unwin) by Jodi Picoult is on sale now.