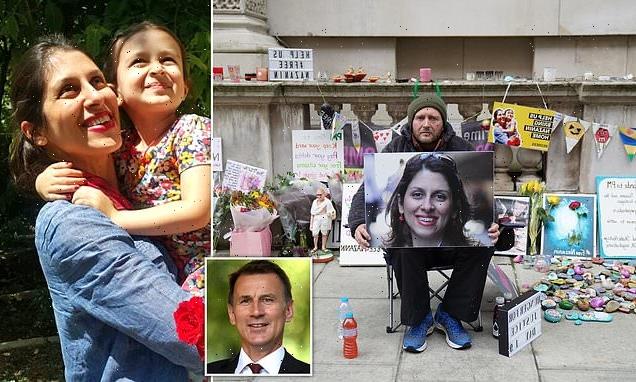 Put yourself for a moment in the shoes of Gabriella Ratcliffe. Aged seven, the same age as my youngest daughter, she should be enjoying her primary school years without a care in the world.

But she spent her early childhood cruelly separated from both parents, only allowed to visit her mum once a month in a grim Iranian jail.

She’s now watching her dad and sole carer – a softly spoken accountant with steely resolve – publicly starve himself in an act of utter desperation. It’s hard to imagine the impact of such unspeakable trials on a young life. 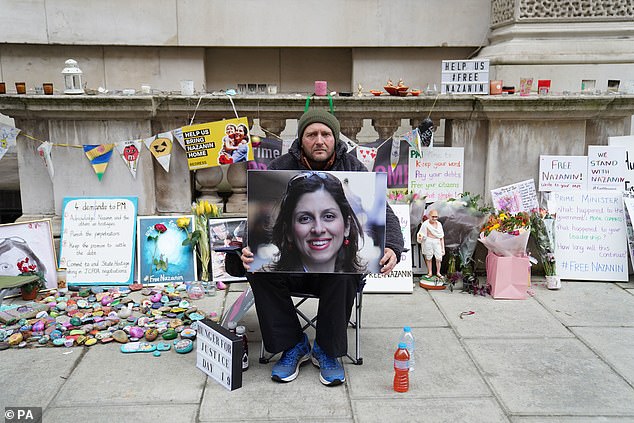 Richard Ratcliffe, the husband of Iranian detainee Nazanin Zaghari-Ratcliffe, on the 19th day of his hunger strike outside The Foreign, Commonwealth and Development Office in London, following his wife losing her latest appeal in Iran

In fairness, ministers are also desperate to get her mother, Nazanin Zaghari-Ratcliffe, home. They have been since long before my tenure as Foreign Secretary. Five foreign ministers flew to Tehran on Theresa May’s watch to try to resolve this issue of dual national British citizens facing arbitrary detention.

The truth is that this is a vile, heartless regime which has no qualms about falsely imprisoning and torturing innocent people to create diplomatic leverage. This is hostage diplomacy, and using a young mum and her daughter in a brutal game of cat and mouse is nothing to them. So there can be no excuses for this wicked, terrorist-sponsoring regime – and thanks to Richard’s courage the world finally knows about Iran’s hostage taking. But that doesn’t mean there is nothing we can do to get our people home: That is to settle a £400million debt we owe Iran for tanks that were never delivered during the time of the Shah.

Of course it sticks in the throat to give money to a murderous regime. If this was ransom money I would not support paying it – but a court has decided we owe the money and even the Defence Secretary has said we do. Britain is founded on respect for the rule of law and we should pay our legal debts; finding the loan shark unsavoury unfortunately doesn’t get you off the hook.

There are all sorts of bureaucratic obstacles to paying up: We can wait for yet one more court ruling to confirm that the debt is legally due. We can hide behind sanctions which make it hard to transfer the money, even though such issues can be resolved.

President Obama repaid a similar American debt so it is unlikely we would get much opposition from the President who served under him. Our new Foreign Secretary Liz Truss is a tenacious freedom-fighter.

Our values – and her values – are founded on respect for individual human rights, so what better way to demonstrate that than securing the freedom of Nazanin, Anoosheh Ashoori and Morad Tahbaz?

It is time to bite the bullet, get them home and form a united front with our allies so that Iran’s hostage taking is stamped out once and for all.