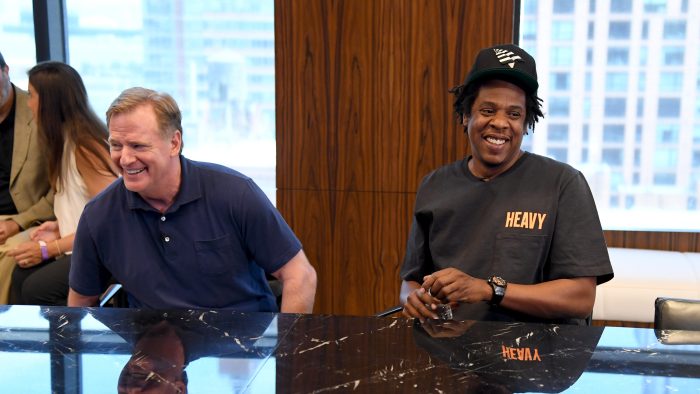 If anyone expected the drama surrounding Jay-Z’s deal with the NFL to calm down over the weekend, they were mistaken, as controversy and conversation continued to swirl.

The situation grew even more intense late Friday when TMZ reported that Jay is looking to acquire a majority interest in an unspecified NFL team, which would add a whole other level to his deal with the league. However, Jay is an owner of Roc Nation Sports, an agency that represents athletes, so it was not immediately clear whether he would have to divest that interest in order to acquire an ownership stake in an NFL team; one unidentified source close to the rapper reportedly told TMZ that he wouldn’t: “Jay is not an NFL agent and does not take part in the operations of the NFL players in Roc Nation.” Jay gradually sold off his interest in the NBA’s Brooklyn Nets after Roc Nation Sports launched in 2008 to avoid such a conflict.

Contacted by Variety, a rep for the rapper declined comment; reps for the NFL did not respond.

However, Kaepernick and his friend and former teammate Eric Reid weighed in on the situation.

On Sunday, Kaepernick — who rarely posts statements on social media, opting instead to share those of others — posted a photo of Reid and Miami Dolphins’ Kenny Stills and Albert Wilson kneeling, referencing Jay-Z’s statement that “I think we’re past kneeling” during the press conference announcing the NFL deal on Wednesday.

My Brothers @e_reid35 @kstills @ithinkisee12 continue to fight for the people, even in the face of death threats. They have never moved past the people and continue to put their beliefs into action. Stay strong Brothers!!! ✊?

“My Brothers @e_reid35 @kstills @ithinkisee12 continue to fight for the people, even in the face of death threats. They have never moved past the people and continue to put their beliefs into action. Stay strong Brothers!!! ✊” he wrote.

Reid went harder, wearing a Kaepernick shirt as he told reporters late Friday, “Jay-Z claimed to be a supporter of Colin, he wore his Jersey, he told people not to perform at the Super Bowl because of the treatment the NFL did to Colin, and now he’s going to be a part-owner,” he said, shaking his head. “He’s sounding despicable.”

However, he did get some verbal support from Cardi B, who told TMZ late Saturday, “I think that he can make a change,” she said. “I feel like he went in there like, ‘If you guys want me to work with y’all, then y’all need to bring my people in there and do things my way.’” Asked about Kaepernick, she added, “I feel like Jay-Z could bring back Colin Kaepernick [to the NFL], I feel so, I think he has that power.”

Of course, the barrage of editorials and commentary from other celebrities on the matter continued. And as a new work week begins, the only certainty is that we haven’t heard the last of this.