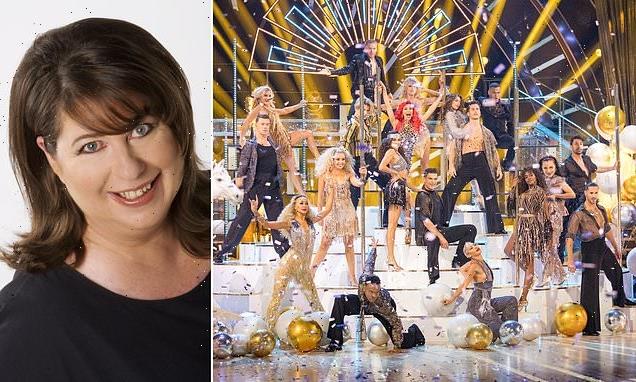 JAN MOIR: No jab, no jive for selfish Strictly Come Dancing stars… It is a great shame, but perhaps now is the time to prepare them for their last waltz

Minutes after I hailed the new Strictly Come Dancing as a potentially ‘vintage’ series, the wheels waltzed right off the wagon and the sequins melted back into the swamp. Let’s call it The Curse Of Jan.

For amid increasingly rancorous backstage rows, the future of the entire series is in jeopardy because three of the professional dancers are refusing to have the Covid vaccine.

There may even be more: nobody knows for sure.

At the moment, Strictly bosses have ‘no clue’ as to which pro dancers have been vaccinated — or which of the celebrities either, for that matter.

As vaccine status is classed as a medical matter, BBC rules mean the show runners are not legally permitted to ask who has been jabbed.

For God’s sake. We are in the middle of a national public-health emergency. Is there no room in this ballroom of confusion for a drop of common sense and some personal responsibility to prevail? 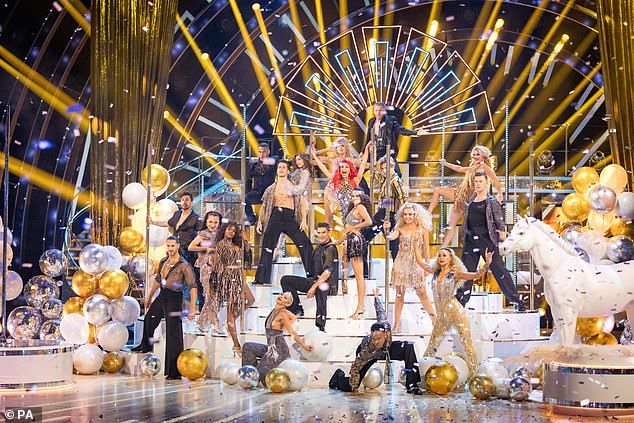 Last year, vaccine status on the show was not an issue, as the dancers and celebrities, once they had tested negative, selflessly lived and worked in strictly controlled bubbles throughout the series.

This year, more lax measures mean everyone is potentially at risk from the Covid threat, particularly considering the close conditions in which they work and rehearse.

No amount of mask-wearing and hand-sanitising can guard against dancing cheek to cheek or the boa-constrictor strictures of the Argentine tango.

Remarkable as it may seem, the unnamed trio would rather lose their jobs than have the jab. This means they are willing to give up the maximum exposure that comes with a role on Strictly, including three months of prime-time appearances on one of the most popular shows in the country. Not to mention probable earnings of around £50,000.

Many might find it odd that anyone would refuse a potentially lifesaving dose of medicine, delivered free of charge, in a developed country that is finally on the front foot in the Covid wars. But no, they don’t want it, thanks very much.

In vast areas of the developing world, where vaccines are not readily available, desperate people are dying for want of a jab. Here in the First World, there is the disgraceful luxury of refusal.

This rumba of discontent rumbling on under the glitterball is a microcosm of what is going on elsewhere in the country. It is not just anti-vaxxer nutters who refuse the jab; there are still pockets of resistance everywhere, particularly among the young.

Some health workers don’t want to be vaccinated. There is more hesitancy among members of ethnic minorities. But why the reluctance? It seems mad and blinkered to those of us who appreciate that Covid vaccines have saved millions of lives already, and that vaccines in general are the greatest health achievement of the modern world.

Yet some, like the Strictly dancers, worry about the speedy development of vaccines and fret about their safety. Maybe they read on the internet somewhere that the jab might be risky! Better have a vodka shot and a ciggy to calm down, eh?

In addition, refuseniks perhaps feel it is not the job of the unvaccinated to protect the vaccinated — without realising it is they who are most at risk.

No vaccine gives 100 per cent immunity. Transmission can and will continue between people who haven’t been vaccinated, who can then spread Covid to the vulnerable and also to those who have been vaccinated but haven’t formed a fully protective immune response.

Jabbed or not, we are all in this together. Except when we are not.

I suspect many of the young feel they are in no danger of catching Covid because they are fitter, healthier and less likely to develop serious symptoms. And who is fitter or healthier than professional dancers, men and women who have trained like Olympians since they took their first tap class at the age of six?

Like elite athletes, they are highly aware of their bodies and their health. If you spend your whole life in a slog of discipline and denial, as dancers must, then a highly developed sense of physical self is to be expected.

So in many ways, I understand. And despite the mounting pressure on them to get jabbed, including a plea from Boris himself, ultimately it has to be their choice. In a civilised society, no one can force anyone to get vaccinated, Strictly dancer or otherwise.

It is a great shame, but perhaps now is the time to prepare them for their last waltz? And to green-light those dutifully vaccinated understudies and Cinderellas waiting in the wings to take their place in the Strictly line-up, perchance to surprise and delight millions.

Maybe it will be a vintage season after all, so proving me right. Which is all that matters in the end.

Holly’s on the wellness wagon

Holly Willoughby is launching a new lifestyle website which she promises will be ‘a space full of things I love and people who inspire me, from beauty and fashion to energy and healing’.

Oh no. From Amanda Holden’s cushions to Gwyneth’s vagina candles to Rita Ora’s pillowcases, everyone wants to be a living brand these days. You can’t blame them.

There is a fortune to be made in this business, which is basically rich women flogging stuff to poorer women in an effort to get richer while they get poorer, if you follow my drift. 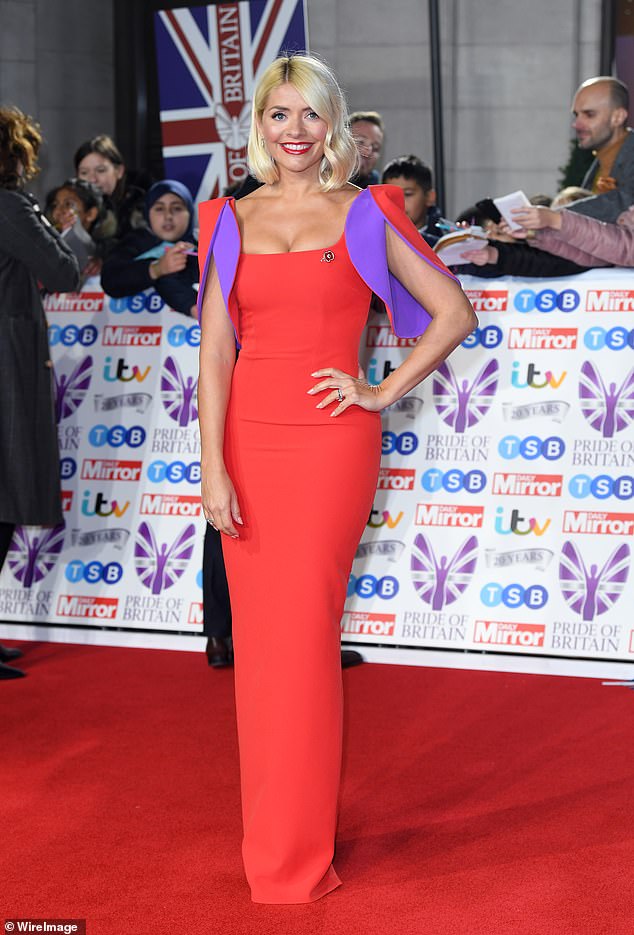 Holly is launching Wylde Moon — an online space to empower women, explore crystal energies and offer fashion and beauty tips. Excuse me. Did someone mention crystals?

I know people like them, but is there is a bigger waste of money on the planet? We have barely moved on from the times of Norse mythology, when acorns were exchanged between two witches as a sign they were in safe company. In fact, give or take 30 quid and a chakra spray, nothing has changed.

‘I’ve had a lot of experience but I still don’t know who I am,’ said the This Morning star, who is a 40-year-old mother of three.

Holly, if not now, WHEN?

In the meantime, please buy her calming candle, scented with thyme and teardrops shed by real elves. Called Away With The Fairies, it’s yours for £34.

It isn’t just GPs who don’t want to see patients face to face. Other health professionals are following their lead.

A friend has just been told he has oesophageal cancer — a devastating diagnosis. Right now, he is at his most vulnerable; unsure of what the future holds for him, only that whatever lies ahead is going to be difficult.

Next week, he meets his multi-disciplinary team to be told what the next stage is and receive his definitive diagnosis. Except he won’t meet them face to face, as it is going to be a video conference call instead.

He has been sent a two-page letter containing instructions on how to set it up, which he and his wife have ploughed through with confusion and worry.

Right now, my friend needs reassurance, professionalism, care and the feeling that he matters. He needs hope. And faith in the system into which he now entrusts his health and his life. Is he going to get all that at the end of a telephone line? I doubt it.

It has barely been two weeks since Emma Raducanu won the U.S. Open, yet the 18-year old is already the star of a glamorous jewellery campaign.

I wish her all the best, but worry that her youthful joy and innocence will soon be extinguished, spark by spark, Tiffany diamond by Tiffany diamond.

Emma’s in a binary bind

For someone who has said she isn’t sure where ‘she/they’ are when it comes to gender identity, Emma Corrin didn’t seem to mind being classified as a woman and nominated in the Best Actress In A Drama category in the Emmys this week.

She turned up in an outfit consisting of a shapeless dress, cap and gloves, all artfully tailored.

She looked sweet; Caspar the Ghostly, a Little Beige Riding Hood, this elegant creature of no fixed gender abode. But if gender is such a big deal for Emma, why did she turn up to be judged as an actress? 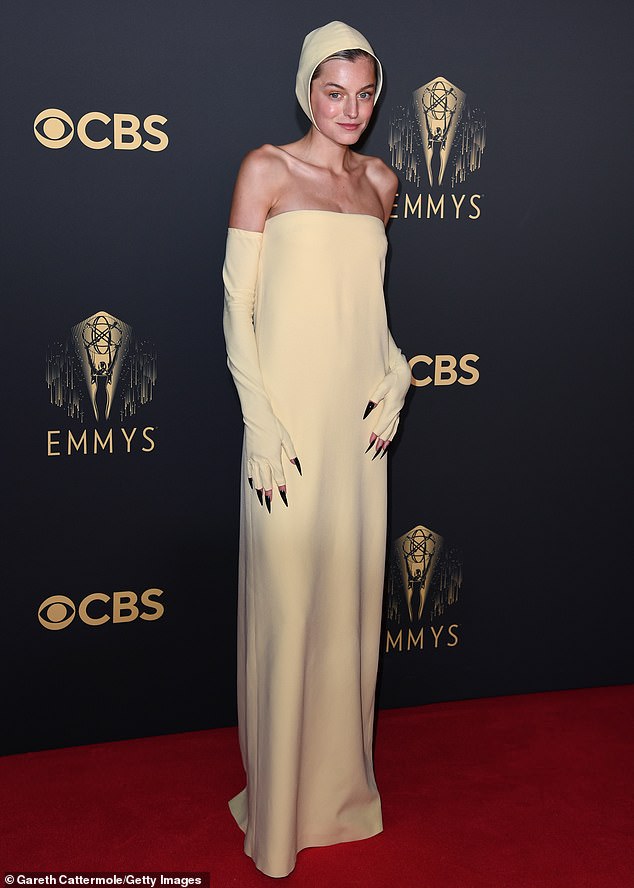 One can wish her every happiness on her gender journey and feel sad that she has faced trouble in trying to locate the essence of herself, while still wondering about the hypocrisy of it all.

Should she not, in principle at least, be against such outrageous genderism as a ‘best actress’ classification?

Still, until there is a category for the Best Performance By A Non- Binary Performer, what are she/they to do?

Letters just published by Prince Albert reveal that Queen Victoria was a right old nag. He complains that she would follow him from room to room, continuing to scold him during their rows.

Now, there is a woman after my own heart. Victoria may have built Albert a museum to play with, put up a gilt bronze statue to him after he died and mourned him for the rest of her life, but rules are rules and rows are rows.

Sometimes husbands just have to listen to wives, especially if they have been found lacking in any tiny way that irritates her indoors. Remember Phyllis Diller’s advice, which was: ‘Never go to bed mad. Stay up and fight.’

That was in the American comedienne’s Housekeeping Hints book, first published in 1966 and still my bible. ‘Just the other day,’ she wrote, ‘I said to my husband, don’t you think we’ve got a storybook romance? And he said yes, every page is ripped.’

Victoria would understand. So would Albert, it seems.

Insulate us from hypocrites!

An Insulate Britain activist stormed off ITV’s Good Morning Britain after being accused of hypocrisy.

Liam Norton was frothing about people who don’t insulate their homes, when it was discovered his own home was not insulated.

But Liam, who was one of the protesters on the M25, did not see it as a problem: ‘Whether my home is insulated or not doesn’t change the fact that millions of people’s homes aren’t insulated and aren’t going to be.’ 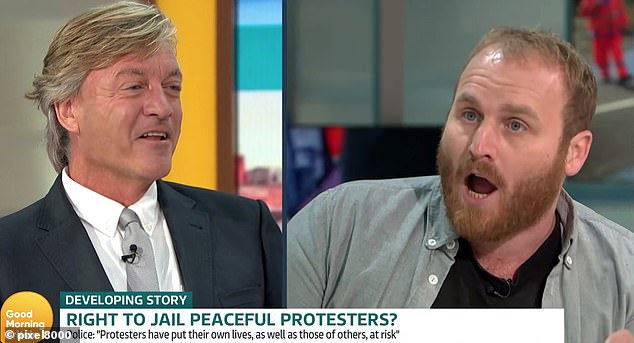 He went on to compare the struggle of climate protesters to that of Winston Churchill’s fight against Nazi Germany. ‘Do you know how many MPs supported Churchill in 1937?’ he demanded. ‘Six MPs, and Churchill was right, wasn’t he? But only six supported him.’

Oh, God. Rick from The Young Ones is alive and well. Another M25 protester — his house isn’t insulated, either — had a placard that read: ‘Arrested 4 Times For Mourning Life on Earth.’

This ghastly band of hypocrites want to hold others to standards they will not keep themselves. Like the fossil fuels they profess to hate, they are doing more harm than good.