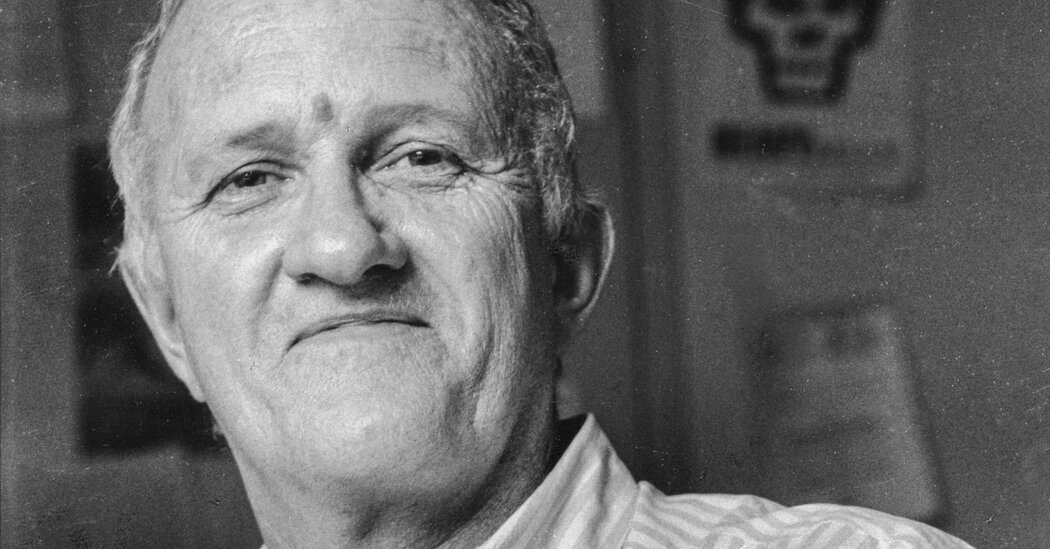 James Ridgeway, an investigative reporter who exposed corporate dirty tricks, the secrets of environmental polluters and the horrors of solitary confinement in the nation’s prison systems, died on Saturday in Washington, D.C. He was 84.

His death, after a brief illness, was confirmed by his longtime collaborator Jean Casella.

In a career that spanned six decades, Mr. Ridgeway wrote for The New Republic, The New York Times, The Nation, The New York Review of Books, Ramparts, Hard Times and Mother Jones. He was the Washington correspondent of The Village Voice for 30 years; wrote, co-wrote or edited 20 books on national or foreign affairs; and wrote, produced and directed several documentaries.

His targets were legion: Detroit automakers concealing unsafe car designs, the strutting Ku Klux Klan and neo-Nazis, universities profiteering from government weapons research, unanswered questions on the Sept. 11 attacks, the shabbiness of the sex industry, and the phoniness of presidential candidates in 1992 who were caught on film preening when they thought nobody was watching.

In the tradition of Lincoln Steffens, the early 20th century editor of McClure’s who revealed municipal corruption in a muckraking book, “The Shame of the Cities” (1904), Mr. Ridgeway attacked malfeasance and skulduggery in American life with a passion, as one critic put it, “so earnest and straightforward that he can make a lengthy explanation of sewage interesting.”

Mr. Ridgeway’s longest and most fervent crusade was his last: a decade-long effort, in what might otherwise have been his retirement years, against solitary confinement.

Since 2010, when he and Ms. Casella established the website Solitary Watch, Mr. Ridgeway, who was based in Washington, had received thousands of messages from inmates in solitary confinement. He wrote to many of them, and with Ms. Casella and Sarah Shourd as editors, compiled their stories in “Hell Is a Very Small Place: Voices From Solitary Confinement” (2016).

“These are the stories of 16 people, mostly in their own words, who describe the miserable realities and humiliations of their lives in tiny boxes, buried in holes 23 hours a day, sometimes for years at a time,” Mr. Ridgeway said in an interview in 2019 for this obituary. “Solitary confinement in America is a national scandal of human rights violations.”

Although thousands of prisoners are still subjected to solitary confinement, many states in recent years have restricted the practice, and the United Nations has denounced its use beyond 15 days as cruelty. In 2016, President Barack Obama banned its use for juvenile offenders in federal prisons and limited it for adult first-offenders to 60 days annually from 365 days.

“Many of the book’s stories are culled from the website, which publishes original news reporting as well as firsthand accounts of solitary confinement,” The New Yorker wrote in 2016. “The site gets about 2,000 visitors a day, but one story drew 600,000 views. It was written by a New York prisoner named William Blake, who had then been held in solitary for nearly 26 years.”

Mr. Ridgeway first rose to national prominence after writing “Car Design and Public Safety” for The New Republic in 1964, documenting a rising tide of deaths and injuries during crashes in flawed American cars. His main source was an as-yet unknown Ralph Nader, whose book, “Unsafe at Any Speed,” was published a year later, in 1965. It singled-out the Chevrolet Corvair as particularly unsafe.

Neither Mr. Ridgeway’s article nor Mr. Nader’s book made a big splash at first. But after Mr. Nader’s book appeared, another New Republic article by Mr. Ridgeway disclosed that General Motors had hired detectives to dig up dirt to discredit Mr. Nader as well as prostitutes who failed to lure him into compromising situations. That news made national headlines.

An outraged Senator Abraham Ribicoff, Democrat of Connecticut, called a Senate hearing, and G.M.’s president, James Roche, admitted to the misdeeds and apologized to Mr. Nader, who went on to become an overnight hero of the consumer movement. His book shot to the top of best-seller lists, and Congress enacted the National Traffic and Motor Vehicle Safety Act in 1966, empowering the government to set and enforce new vehicular and traffic safety standards.

Mr. Ridgeway focused on the nation’s 2,200 public and private institutions of higher learning in “The Closed Corporation: American Universities in Crisis” (1968). The book charged that colleges and universities, hiding behind tax exemptions and interlocked with private corporations and government agencies, were riddled with conflicts of interest in a corrupt system of profiteering.

“Ridgeway notes that 50 years ago, the universities were run by social reformers and scholars,” H.L. Nieburg wrote in a review for The New York Times, “while today they are operated by teams of middle-management executives more involved with pyramiding financial holdings and keeping faculty in line than in undergraduates.”

In 1970, Mr. Ridgeway’s book, “The Politics of Ecology,” accused America’s principal polluters — the industries that burn coal, gas and oil — of undermining the environmental and consumer groups that sought to protect the ecology, in a scheme to control the nation’s natural resources and dominate world energy markets.

John Leonard, in a Times review, called it “a fine, tough and indispensable book,” adding, with sarcasm: “There is also money to be made in pollution-control systems, a potential $25 billion market, but only so long as the polluters continue to pollute, passing along the cost of control systems to the taxpayer.”

After publishing “Blood in the Face: the Ku Klux Klan, Aryan Nations, Nazi Skinheads and the Rise of a New White Culture” (1991), Mr. Ridgeway wrote, produced and directed a documentary, “Blood in the Face,” using archival footage and interviews to expose far-right hate groups. A revised and expanded edition of the book is to be published in June.

James Fowler Ridgeway was born in Auburn, N.Y., on Nov. 1, 1936, the older of two sons of George and Florence (Fowler) Ridgeway. His father was a historian on the faculty of Wells College, a private liberal arts school in Aurora, N.Y. During World War II, the family lived in Washington, where Professor Ridgeway was a State Department specialist on British affairs.

James and his brother, George David, attended public schools in Washington and Garrison, N.Y., where the family settled after the war. After graduating from the Hackley School in Tarrytown, N.Y., in 1955, James attended Princeton University, where he was the editor of the student newspaper, The Daily Princetonian, and earned a degree in English in 1959.

He began with The Wall Street Journal, writing about the economy and banking, but soon left for Europe to freelance for The Observer, The Economist and The Guardian. In 1962, he moved to Washington, which became his permanent base, and joined The New Republic. For eight years, he wrote about industries and economics.

In 1966, Mr. Ridgeway married Patricia Carol Dodge, a New Republic editor. They had a son, David Andrew Ridgeway. Both his wife and his son survive him.

Mr. Ridgeway and Andrew D. Kopkind founded Hard Times (first called Mayday) in 1968 to cover the antiwar, Black-power and student movements. He edited Ramparts, a New Left magazine, from 1970 to 1975. For The Village Voice (1973-2006), he wrote political columns and covered events in Europe, the Balkans and the Middle East, as well as the Washington scene.

In 2012, after the death of Alex Cockburn, with whom he had shared a column in The Voice, Mr. Ridgeway wrote in Mother Jones: “We did our reporting in a way that most people in the press would die for. Nobody censored what we wrote. Nobody messed with how things were written, or dreamed of questioning a political opinion.”