Bruised Nationals MPs are warning it will take some time to mend the bitter divisions within the party following Barnaby Joyce’s ousting of Michael McCormack and his allies from the ministry.

Mr Joyce’s decision to dump both Victorian MP Darren Chester and Queenslander Keith Pitt from cabinet and elevate two of his backers, Bridget McKenzie and Andrew Gee, mirrored a similar reshuffle in December 2017, which many Nationals believe started three years of animosity within the party room. 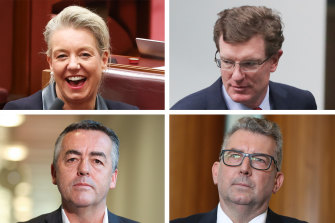 Bridget McKenzie and Andrew Gee (top ) were winners from the reshuffle, while Darren Chester and Keith Pitt were dumped from cabinet. Credit:Alex Ellinghausen

Mr Pitt, who has kept his water and resources responsibilities but been dumped from cabinet, struggled to hide his frustration Monday morning. In the fallout from last Monday’s leadership spill, Mr Pitt had not revealed whether he had stayed loyal to Mr McCormack or switched to Mr Joyce.

The was a growing assumption within the 21-member party room in the following days that one of Mr Pitt or deputy leader David Littleproud, who has also not declared who he backed, were among those who had voted for Mr Joyce, which had boosted the now deputy Prime Minister’s numbers since the failed spill of February 2020.

“I’m disappointed, that’s true. In the game of snakes and ladders I’ve landed on a snake, a very short one,” Mr Pitt told Sky News on Monday morning.

The MP for Hinkler, which takes in the central Queensland city of Bundaberg, said he was disappointed to lose the Northern Australia portfolio, with the special envoy position handed to Nationals senator Susan McDonald.

But he rejected criticisms the demotion of resources was a slight against the sector.

“Those are decisions for the leader. My job is to represent the sector, to the best of my ability is what I’ve always done,” he said.

Mr Chester apologised to regional Australians for the way the party conducted itself last week.

“In the middle of a global pandemic, as we’re recovering from bushfires, from drought, from storms, we spent the whole week talking about ourselves again,” Mr Chester told ABC TV.

The Victorian, who was a close ally of Mr McCormack said he would not offer a view on the motions behind the reshuffle and said it was up to Mr Joyce to explain the rationale behind his decisions.

“I can’t do a running commentary on my colleagues,” he said. “One, I can’t be bothered, and, two, I’ve got better things to focus on in terms of my own community. And it just plays into the media cycle: ‘Chester said that, Joyce said that, McKenzie said that’.”

“Out in my community, they couldn’t give a toss about that either. They want us to focus on them.“

Mr Joyce had been urged by some Coalition colleagues not to swing the axe if the party was to heal from years of internal bickering, which eventually led to the MP for New England regaining the top job. 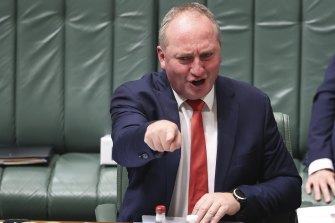 Barnaby Joyce said his decisions were “not a case of rewarding”.Credit:Alex Ellinghausen

Several say they believed Mr Joyce had missed an important opportunity to help heal old wounds which stem from Mr Joyce’s resignation in early 2018 amid revelations of an extra-marital affair with his staffer and several unproven allegations of sexual harassment.

But Mr Joyce told Nine’s Today program on Monday his decisions were “not a case of rewarding”.

“We know the game of politics,” Mr Joyce said.

“Any person who signs up for politics understands how it works. As a person who spent over three years on the backbench, I make no excuses for that.”

He defended promoting Senator McKenzie to cabinet 15 months after she was forced to resign amid the sports rorts scandal.

The Victorian senator was a key backer of Mr Joyce and in recent months has been outspoken about Prime Minister Scott Morrison’s slow creep towards adopting a target of net zero emissions by 2050 without the National Party’s consent.

Mr Joyce said promoting women was an important consideration for him over the past week.

“Michelle Laundry staying there is important and [Susan] McDonald is important,” he said.

“[There are] incredible, capable people who remain on the backbench. Matt Canavan one of the smartest person in politics Canberra. You sign up for it with broad shoulders and you deal with.”