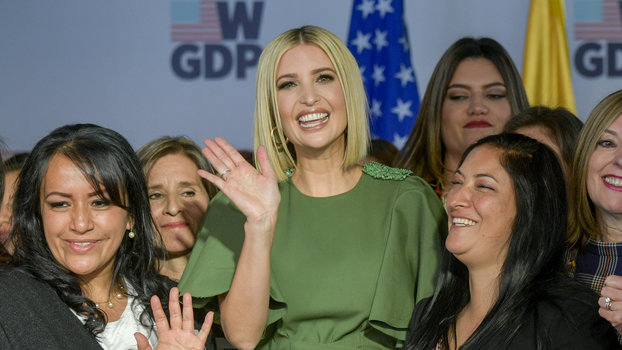 Unlike her stepmother, Ivanka Trump may be making some efforts towards a sort of fashion diplomacy. During her trip to Colombia, Ivanka wore several dresses by Colombian designer Johanna Ortiz and a woven handbag made by artisans in Usiacuri, Atlántico. It's a move that was championed by Michelle Obama and something that Melania Trump has been criticized for time and again. Ivanka has been using the bag, instead of just keeping it hidden away, which may be an indication that she's more comfortable paying homage to designers and artisans from the locales that she's visiting.

In a new Tweet posted by Colombia's vice president's official account, Ivanka can be seen using her new bag while wearing her Ortiz dress. During a separate event with Colombian President Ivan Duque and his wife Maria Ruiz, Ivanka wore a bold yellow Ortiz dress. It's a move right out of Obama's playbook. For state dinners with Japan and China, Obama wore dresses by designers Tadashi Shoji and Vera Wang, respectively, and it was seen as a way for her to honor her guests in a personal way.

Current first lady Melania Trump hasn't been keeping the new tradition up. Instead, she's been sticking to her tried-and-true labels, such as Gucci and Chanel, and has come under fire for doing so. Vanessa Friedman, The New York Times chief fashion critic, called Melania out for wearing a Chinese-inspired dress during a state visit to China instead of a dress from an actual Chinese designer. While some saw Ivanka's latest efforts as a step in the right direction, Freidman didn't see it that way.

"The selections had echoes of orientalism and ornamentation," she wrote about Ivanka's Ortiz looks. "Just as Melania Trump's Gucci gown with faux Chinese embroidery did during the Trumps' state visit to China. Instead of wearing work by a designer that spoke to the nuances of the country, Ms. Trump opted, at least initially, for the most obvious: clothes by outsiders who dipped into their fantasy of India as opposed to its reality."

The move is evidence that Ivanka's at least trying. In the past, her wardrobe came under scrutiny for accusations of cultural appropriation. According to the Independent, during a trip to India, Ivanka wore dresses by British label Erdem as well as American designer Tory Burch. all of the pieces she chose featured embroidery or patterns that took inspiration from Indian culture. After she debuted the looks, critics saw her efforts as a "superficial assimilation of culture." Instead of showcasing Indian handwork and tradition, critics saw Ivanka's choices as inauthentic.

"If Ivanka's clothes are to be an acknowledgment of an ancient and rich culture like ours, especially as she arrives as a dignitary, then the sartorial 'tribute' should be authentic in its intention," Bandana Tewari, Vogue India's editor-at-large, told The New York Times. "We would rather see her wear a hand-woven sari made in our country or a handmade gown made in her own country. But to hybridize the two, in an era of unfiltered diversity, is a superfluous nod to half-acceptance."

Like the handbag she received in Colombia, Ivanka had received a sari from Bollywood costume designer and stylist Neeta Lulla during her trip to India. But instead of wearing it, she opted for the Tory Burch dress. It looks like Ivanka's learning, even if it's just a little at a time.