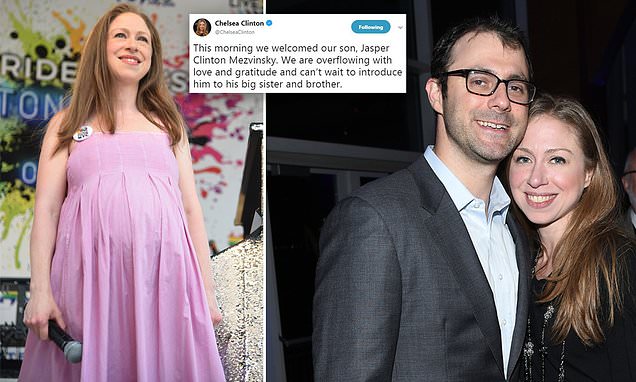 ‘We are overflowing with love’: Former first daughter Chelsea Clinton and her husband Marc Mezvinsky welcome their third child, a son named Jasper

The Arkansas-born children’s book author, 39, shared the happy news with her two million Twitter followers at 10:34 am EST.

Good news: Chelsea Clinton, 39, took to Twitter to share the birth of her third child, Jasper, on Monday morning 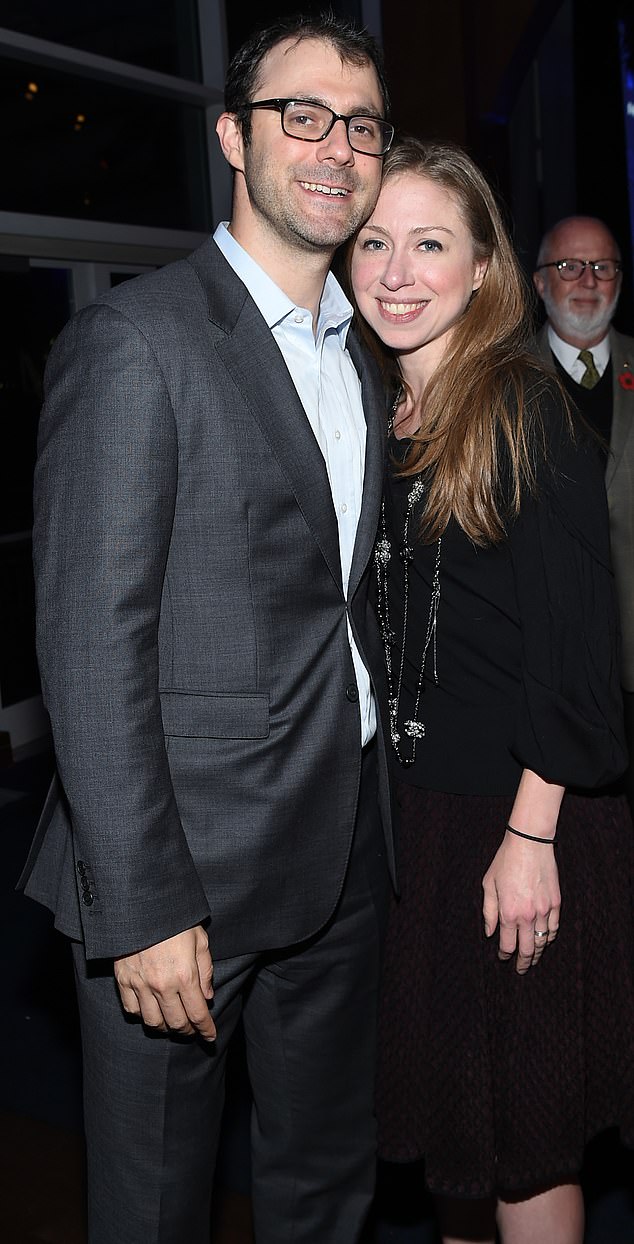 Parents: She and Marc Mezvinsky (pictured in 2017) married in 2010 and already have daughter Charlotte and son Aidan

‘This morning we welcomed our son, Jasper Clinton Mezvinsky. We are overflowing with love and gratitude and can’t wait to introduce him to his big sister and brother,’ the mother-of-three tweeted.

‘Sharing some happy news this morning! Bill and I are so thrilled,’ she wrote, retweeting Chelsea’s tweet.

The family has yet to publish photos of their newest member, though it’s unlikely there will be many snaps. Chelsea and Marc are quite private about their family, and Chelsea — who doesn’t have a public Instagram account — has shared precious few images of Charlotte and Aidan.

The author and activist, who lived in the White House as a teenager, married Marc Mezvinsky in 2010. The couple had first met in 1993 at a Democratic political retreat, when Chelsea’s father Bill was in office as President.

Pennsylvania-native Marc, 41, is an investor and former vice chairman at the venture capital firm Social Capital. His parents, Edward Mezvinsky and Marjorie Margolies,  were both Democratic members of the U.S House of Representatives.

Chelsea and Marc were first confirmed as a couple in 2005. After becoming engaged in 2009, they married in an inter-faith ceremony in July 2010 in New York.

Since the New York-based couple welcomed their two children, Marc is a stay-at-home dad.

It’s fitting that Chelsea shared the news via Twitter, as the couple announced that they were expecting for the third time on the platform in January. 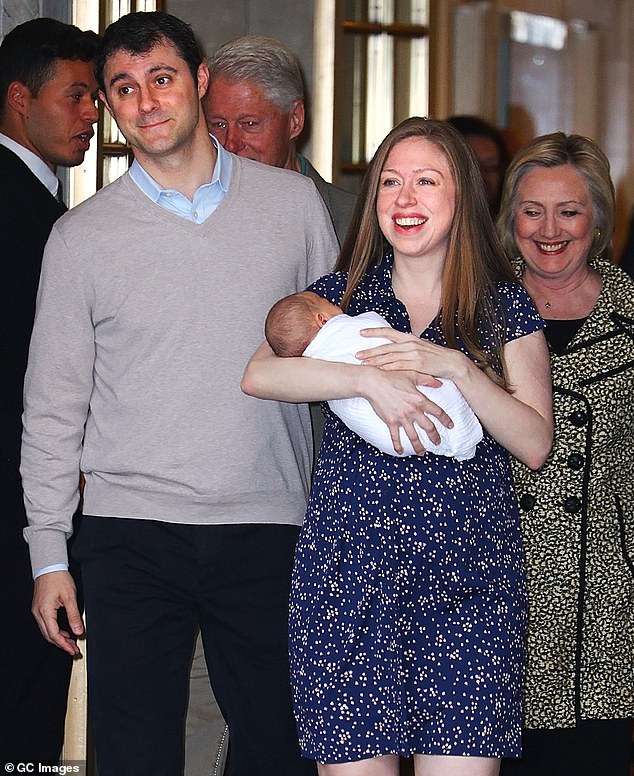 Flashback: The family was seen leaving the hospital with son Aidan in 2016 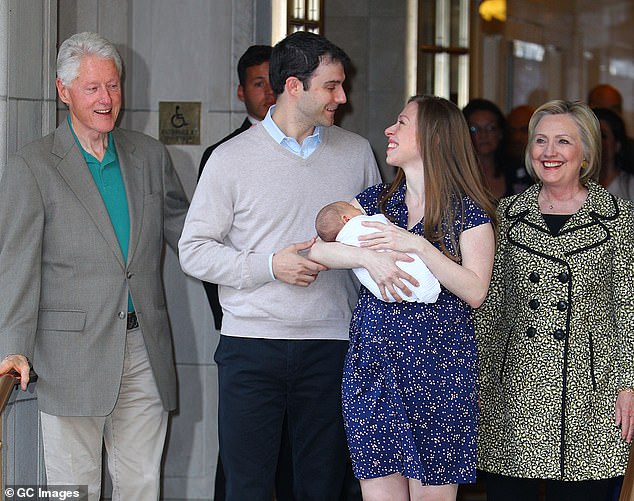 Delighted: Chelsea and Marc were joined by her parents as they announced the birth of son three years ago 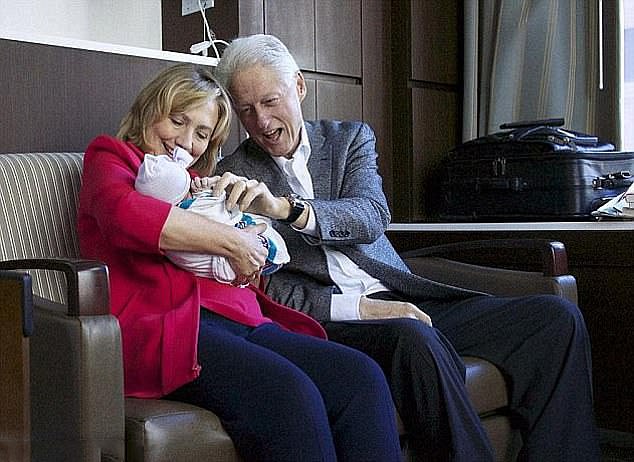 Doting grandparents: Hillary and Bill are seen with their eldest grandchild Charlotte in 2014 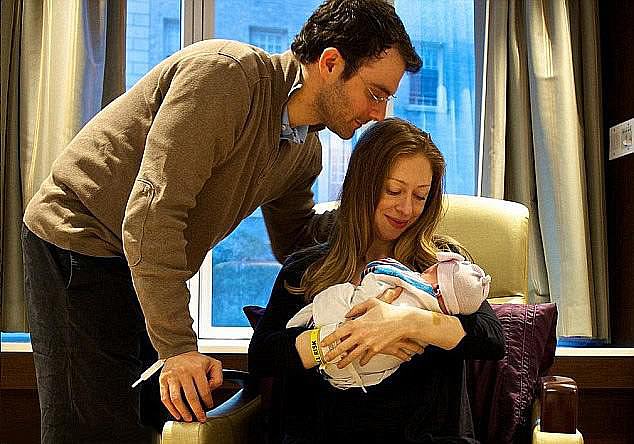 First timers: Chelsea and Marc are now parents to three children (pictured with Charlotte in 2014)

‘Marc and I have loved watching Charlotte be such a wonderful big sister and we’re excited to watch Aidan become a big brother. We cannot wait to meet our newest addition later this summer,’ she tweeted.

Chelsea, who works for the Clinton Foundation, was regularly pictured out and about in the lead-up to her due date.

At celebrations during Pride weekend in New York City earlier this month, the then eight-months pregnant showed no signs of slowing down.

At Pride Live’s annual Stonewall Day celebration, she took to the stage in a billowing pink frock to commend activists for fighting back ‘against discrimination, intolerance, and indifference.’

‘Their spirit and unyielding passion and belief in community continue to inspire and call us to action,’ she told the crowd.