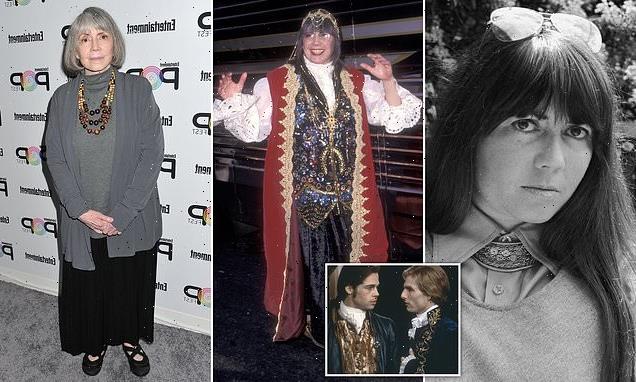 Twists and tragedies of Anne Rice’s VERY unconventional life: Interview With The Vampire author, who’s died at 80, arrived at book signings in a coffin, wore a black wedding veil and wrote her debut after the death of her daughter, 5

Author Anne Rice used to turn up to her own book signings in a horse-drawn hearse, rising from a glass coffin to greet her readers, and yet, she insisted, she was ‘never particularly wild or crazy’.

Rice, who has died aged 80 from complications of a stroke, is best known for the hugely popular Vampire Chronicles series, which includes Interview With The Vampire – later turned into the 1994 hit film starring Tom Cruise and Brad Pitt.

Her most recent book, Blood Communion: A Tale of Prince Lestat, was published in 2018.

Eccentric: Author Anne Rice, who has died aged 80, used to turn up to her own book signings in a horse-drawn hearse, rising from a glass coffin to greet her readers, and yet, she insisted, she was ‘never particularly wild or crazy’. Pictured, in costume in 1996 (left) and in 2016 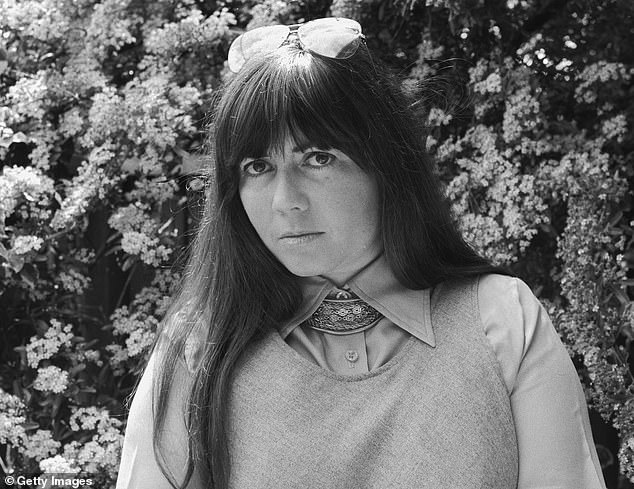 In her blood: Anne grew up in an Irish Catholic family in New Orleans, which fostered a sense of storytelling. Pictured in 1976, the year she published her debut novel Interview With The Vampire. She went on to publish 30 books, selling more than 100 million copies

Announcing her death on Facebook, her son Christopher Rice, also an author, wrote: ‘The immensity of our family’s grief cannot be overstated.

‘As my mother, her support for me was unconditional — she taught me to embrace my dreams, reject conformity and challenge the dark voices of fear and self-doubt. As a writer, she taught me to defy genre boundaries and surrender to my obsessive passions…

‘As she kissed Anne goodbye, her younger sister Karen said, ”What a ride you took us on, kid.” I think we can all agree. Let us take comfort in the shared hope that Anne is now experiencing firsthand the glorious answers to many great spiritual and cosmic questions, the quest for which defined her life and career.’

She was born Howard Allen Frances O’Brien in New Orleans in 1941, one of five daughters of postal worker Howard O’Brien and his wife, Katherine.

Anne was named after her father because her mother thought it would help her ‘get ahead in life’, according to The Times, but she rechristened herself Anne on her first day of school, and later changed it legally.

‘We were an Irish Catholic family, who grew up in New Orleans, and since both the Irish and the people in the South tend to dramatize, everything was a story,’ Anne said in a 2016 interview with Event Magazine. 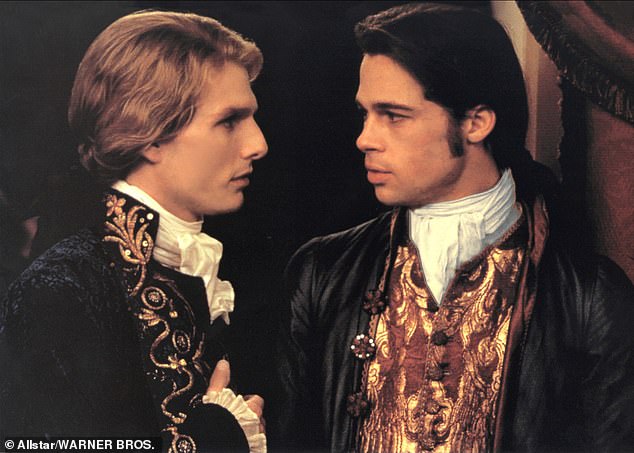 Katherine championed her daughters’ talent and encouraged them to ‘do something meaningful’ with their lives. But when Anne was 14, Katherine died of complications due to alcoholism.

‘She’d been sick for a long time,’ Rice said, ‘and although I wasn’t aware of it when I was very little, it later became obvious that she drank. In a way, I was glad when it was over because she wasn’t suffering any more, although it’s awful to lose one of your parents when you’re very young. 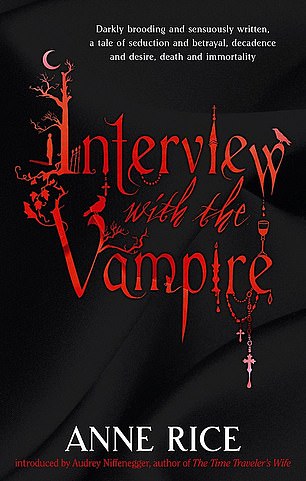 Debut novel: Interview With The Vampire

‘She was a vibrant, brilliant woman, full of dreams for us, and I still wish she had lived long enough that I could have made enough money to solve her problems and get her the help and care she needed. I’ve lived all my life with the wish that I could have saved her.’

The family moved to Texas. It was at Richardson High School that Anne, then 17, met future husband Stan Rice, then 16. It was love at first sight.

Four years later, they were married.

In 1972 the couple were struck by tragedy when their daughter Michele died of leukemia aged five. Anne and Stan spiraled into darkness.

The loss of a child, Race later said, ‘is almost too horrible to consider. I wouldn’t wish that tragedy on any human being, and you get through it because you either give up on life or you keep living.’

She also admitted she considered ‘giving up’.

‘I drank very heavily and recklessly and could have died at any point. But my husband and I were determined to make it. We didn’t realize it at the time but the strongest weapons we had to fight that despair were our poetry and our prose. We put our faith in something that we hoped would never die, which was our art. 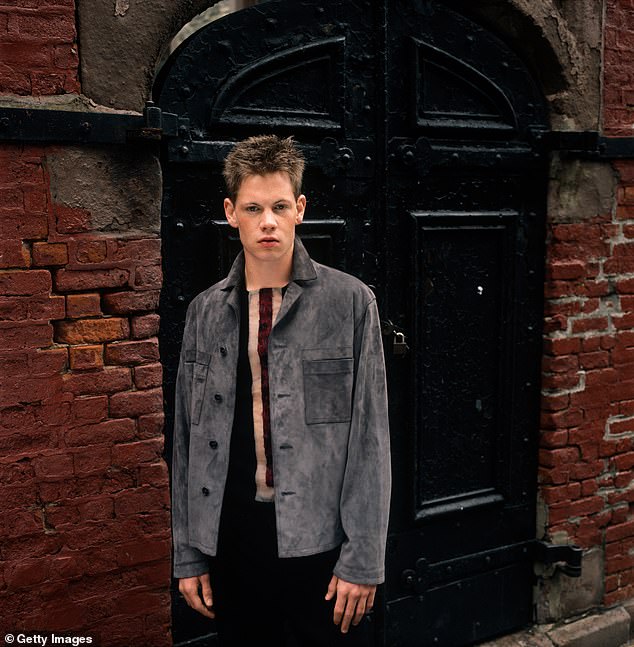 Savior: Anne and her husband Stan spiraled into a depression following the death of their five-year-old daughter in 1972, but said the birth of their son Christopher (pictured in 2000) gave them a reason to live. Christopher followed in his parents’ footsteps and became a writer 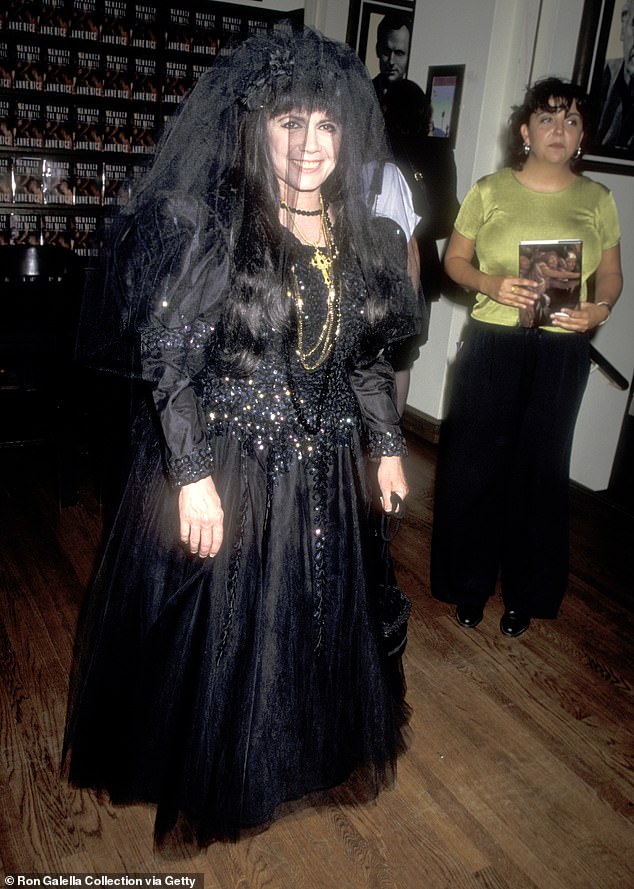 Over-the-top: Anne Rice dresses up to sign copies of a Vampire Chronicles book in 1995 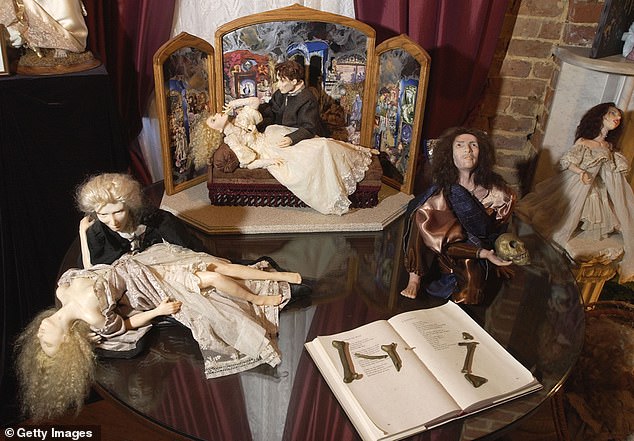 Unusual: Anne kept a collection of dolls, staged in various positions, in a New Orleans property

‘And then our son Christopher was born [in 1978] and at some point after that, my husband and I decided we would never drink again and we kept that promise. That was our moving back into life.

‘I’m not sure our art would have entirely saved us from drink but our son definitely did,’ says Rice. ‘He was our reason to live. It was time to stop mourning, stop drowning ourselves in booze and pay attention to what our child needed.’

It was in 1976, four years after their daughter’s death, that Anne published her debut novel, Interview With The Vampire.

The novel tells the story of Lestat, his companion Louis, and Claudia, the vampire child to whom they are devoted but who can never grow old. 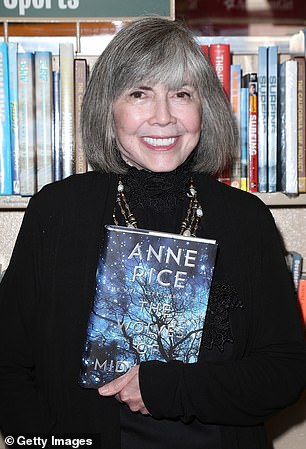 Prolific: Anne continued writing into her 70s. Above, the author promoting a book in 2013

‘Looking back, I realise, of course, that the story was about our daughter,’ Rice told Event Magazine. ‘But when I was writing it, I didn’t have a clue. I remember one night, Stan and I were in a bar and we were discussing the book and I said that I wanted to make Claudia five years old, and he said, “No, that’s too young”.

‘We had no idea we were talking about our own daughter. But Lestat was Stan, I was Louis and Claudia was Michele. To me a novel can go deeper than a memoir can; it can go to the very deepest concerns of the soul. It was a book I felt compelled to write.’

Rice, who had worldwide book sales in excess of 100 million, branched out into witches (the Mayfair Witches series) and werewolves (The Wolf Gift Chronicles) over the years and leaned into the supernatural when promoting her books, even signing in ‘blood’. She also kept life-sized dolls in one of her properties.

Yet she insisted she never bought into the image she portrayed.

‘I wasn’t into the lifestyle myself. I’ve always lived a fairly conservative life. I’ve never been particularly wild or crazy,’ she said.

‘The only good thing to say about it was that he died within five months, it was fast,’ Rice said in 2016. ‘He’s the only man I’ve ever loved and ever been intimate with. He was the love of my life and still is.’

Anne is survived by her son, Christopher, who announced her death on Facebook yesterday. 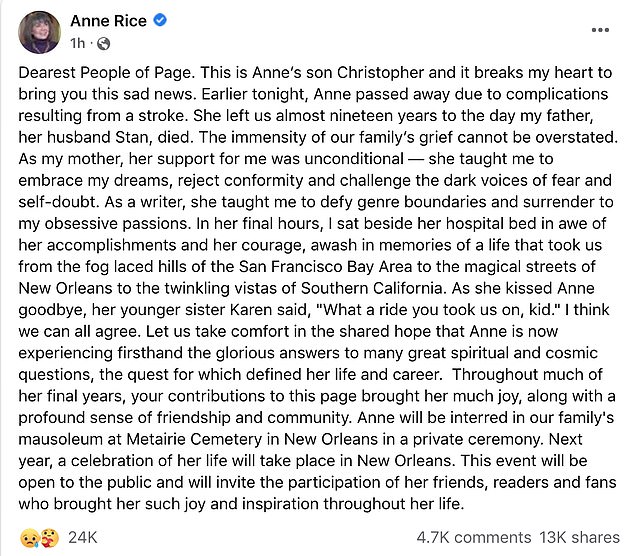 Final goodbye: Anne is survived by her son, Christopher, who announced her death on Facebook yesterday. She died on Saturday from a complication of a stroke

He wrote: ‘Earlier tonight, Anne passed away due to complications resulting from a stroke. She left us almost nineteen years to the day my father, her husband Stan, died.

‘In her final hours, I sat beside her hospital bed in awe of her accomplishments and her courage, awash in memories of a life that took us from the fog laced hills of the San Francisco Bay Area to the magical streets of New Orleans to the twinkling vistas of Southern California.

‘Throughout much of her final years, your contributions to this page brought her much joy, along with a profound sense of friendship and community.’