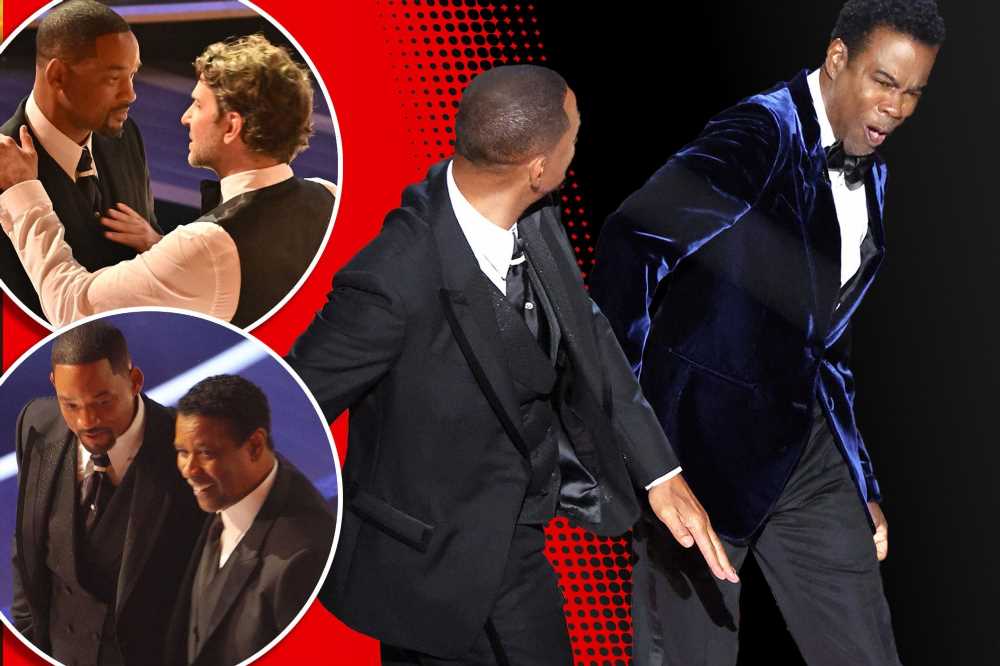 Comedy club owners fear for their comics after Will Smith slap

It was the slap seen around the world.

But no one at the Dolby Theatre thought Will Smith actually meant to hit Chris Rock for making a joke about his wife at the Oscars, until Rock said out loud, “Will Smith just smacked the s–t out of me.”

Though ABC chiefs cut the sound when Smith ran on stage, the audience could clearly hear Smith shouting after he returned to his seat, “Keep my wife’s name out of your f—ing mouth!”

“We thought it was a bit,” said one Hollywood insider. “Then we heard Will yelling. You heard it so loudly in the theater.”

Another Hollywood insider told how she watched the chaos from the green room. “Suddenly everyone froze and the whole place was, like, what the f—k happened?” 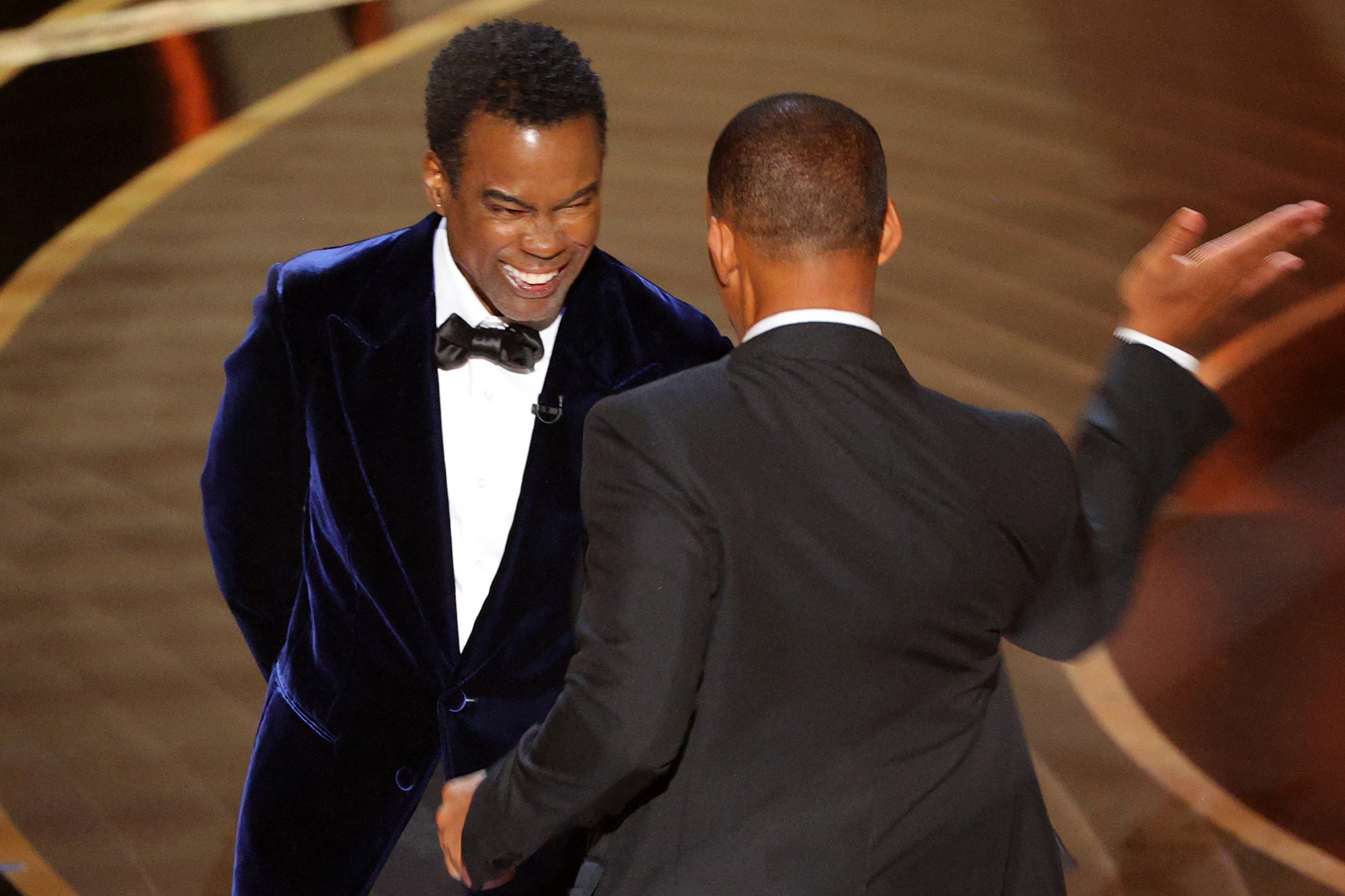 “There was a sense that something was wrong with Will,” said the insider. “I heard Chris’ manager, Jason Weinberg say, ‘I’ve got to deal with the LAPD now. I have to find out what is going on,’ then he walked out.

“Everybody was saying, ‘Holy s—t.’ Even the bartenders. The gravitas was not lost on anyone. There were people saying, ‘Oh, my god, poor Chris.’ People were wondering if Chris’s face was red because he was flush or because he was hit.” 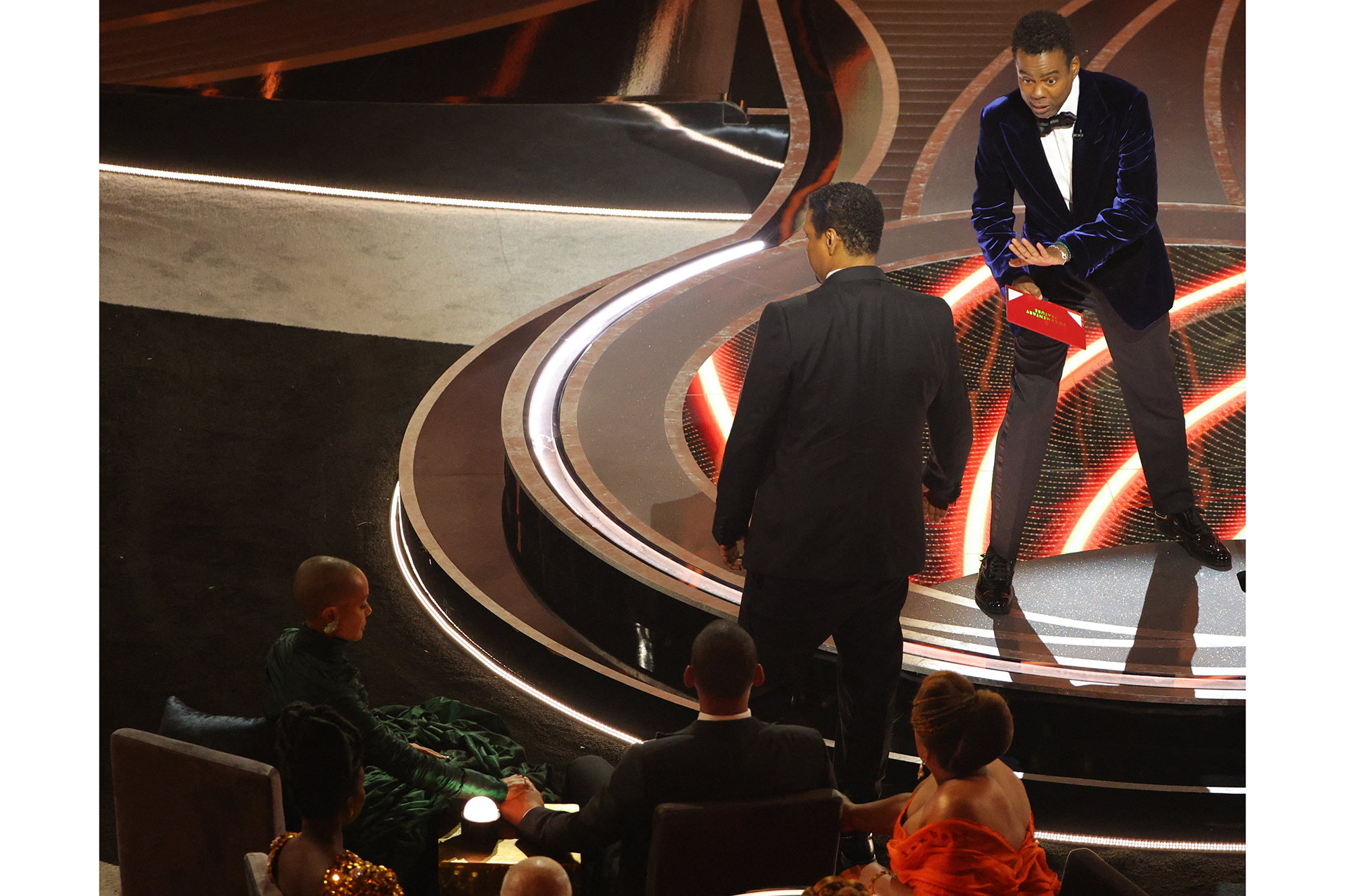 Pictures right after the slap show Rock on stage talking to a seated Smith as though trying to make peace, but a source who knows the comedian said he wasn’t attempting an apology. Rather, he was saying, “Whoa, whoa, OK, I hear you. I’m just here to give out the Oscar,” the source said.

“How does that read as an apology?” the source added. “He was the one who was assaulted live. The fact that the guy continued be so cool after this assault, he deserves an Oscar.” 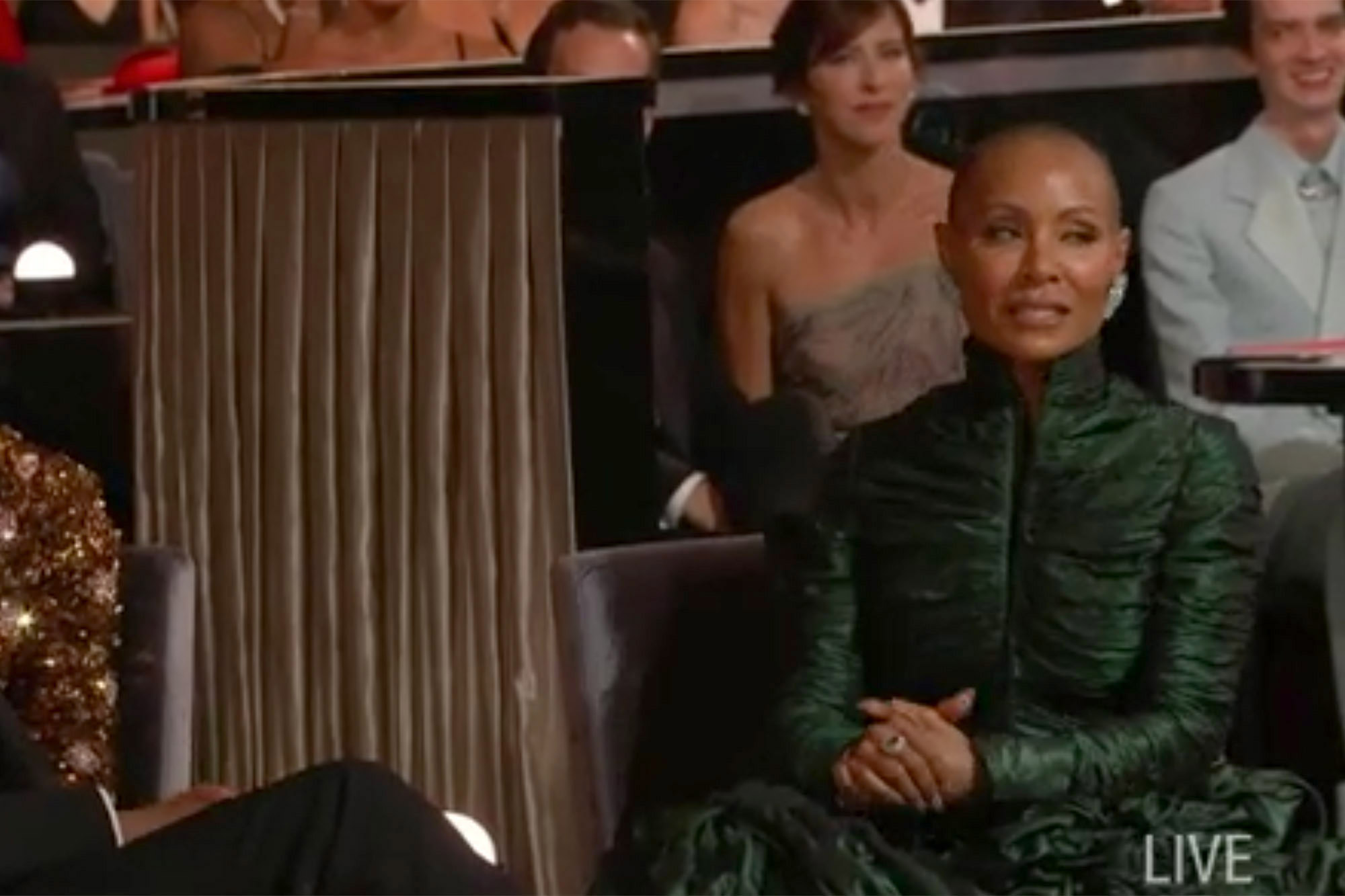 Rock was “shaken” as he walked off stage to meet with producers and members of the LAPD, the source continued.

“When he got off stage, he was a bit shaken. He was taken into a side room and talked to producers and LAPD. Then he went to the writers’ room and spoke to his guys and left. I mean, these are guys he has worked with for years. No one thought there were any issues with the jokes.

“If anything, Regina Hall’s joke about Will and Jada earlier in the evening (which hinted at their open marriage) was in way worse taste,” the source said, while adding that Rock did not have a mark on his face from the slap. 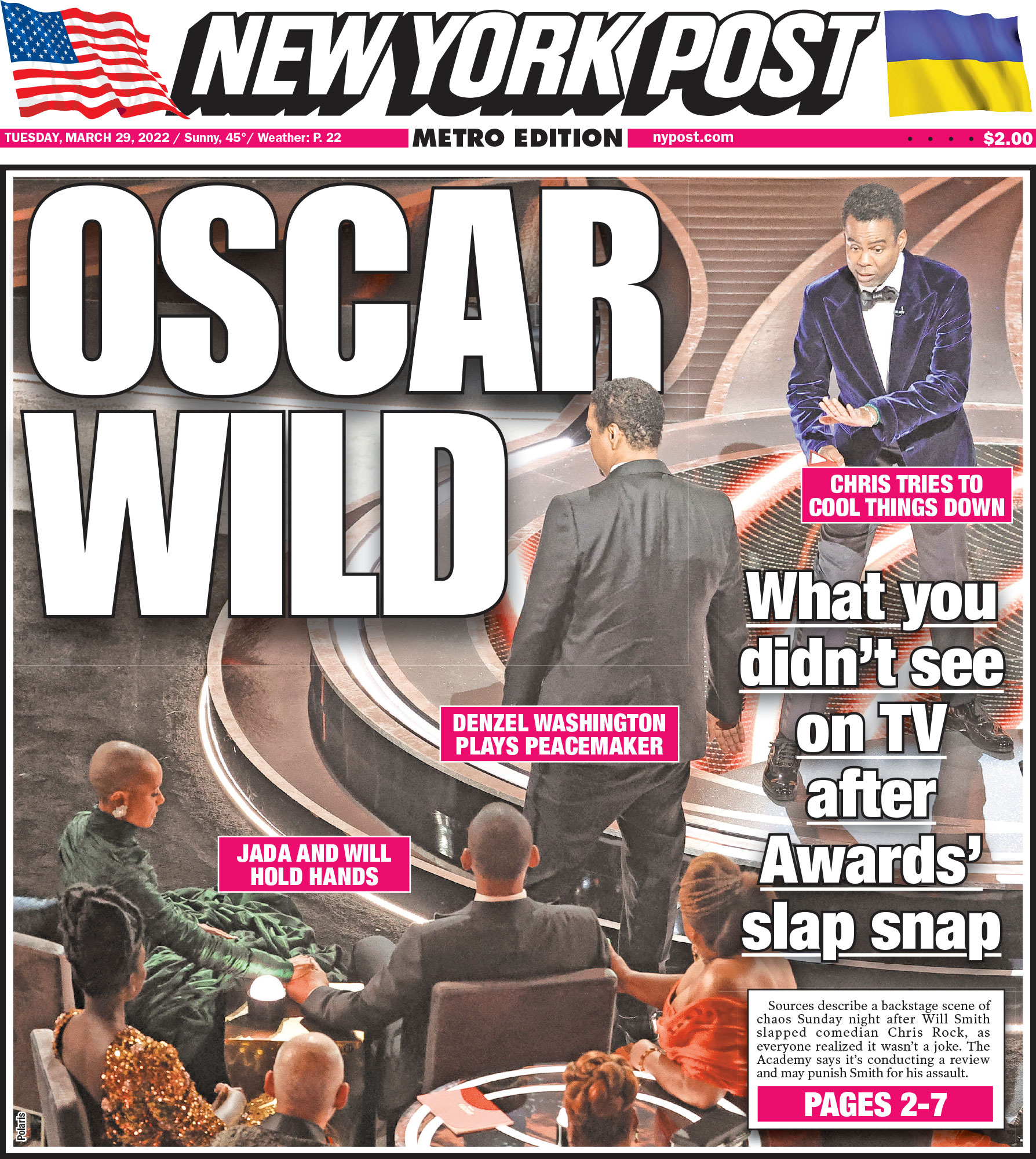 During this awards season, Smith, 53, and his 50-year-old wife have repeatedly been the butt of jokes about their marital status, and some have speculated that Rock’s barb — “Jada, ‘GI Jane 2,’ I can’t wait to see it,” referring to her bald head — might have been the last straw. Filmmaker Judd Apatow surmised, in a now-deleted Twitter post that Smith “could have killed [Rock]. That’s pure out of control rage and violence. [Jada and Will have] heard a million jokes about them in the last three decades. They’re not freshmen in the world of Hollywood and comedy. He lost his mind.”

The Wall Street Journal reported that Rock’s joke wasn’t on the teleprompter nor was it practiced in rehearsal. Meanwhile, Rock reportedly did not know that Pinkett Smith suffers from alopecia, which causes hair loss. 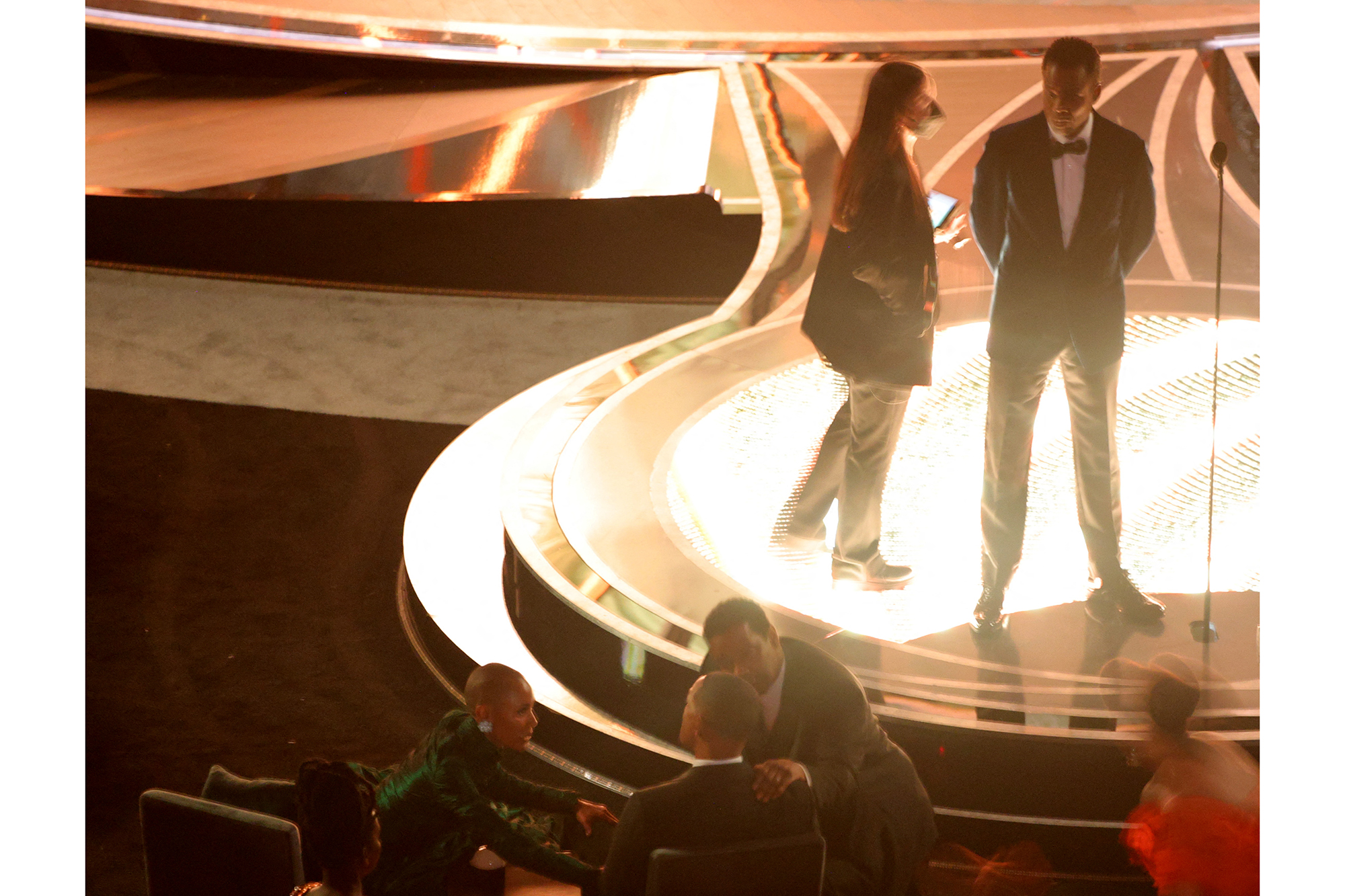 After the slap, LAPD officers asked Rock if he wanted to press charges against Smith. “Chris said no and left soon after. He was stunned and shook,” said the source.

Back in the theater, it was Smith’s great mentor — and now fellow Oscar winner Denzel Washington — who came over to his table first to offer words of wisdom. As Smith later revealed in his acceptance speech for Best Actor later that evening: “Denzel said to me a few moments ago, he said, ‘At your highest moment, be careful, that’s when the devil comes for you’.” 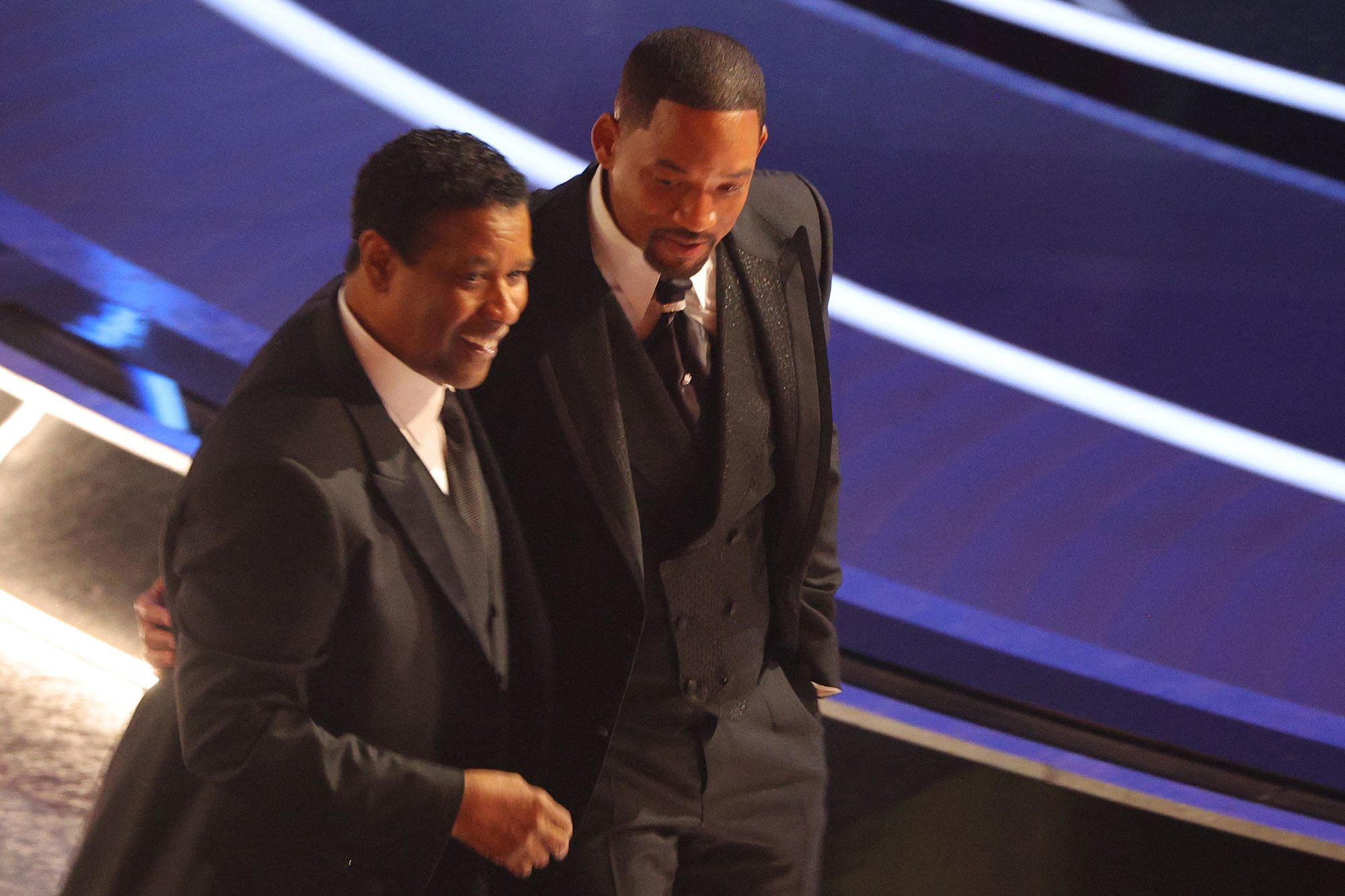 “He was wiping his eyes of tears, he knew it was not good,” said Hollywood Reporter awards columnist Scott Feinberg on his podcast, “The Town,” about Smith in the aftermath. 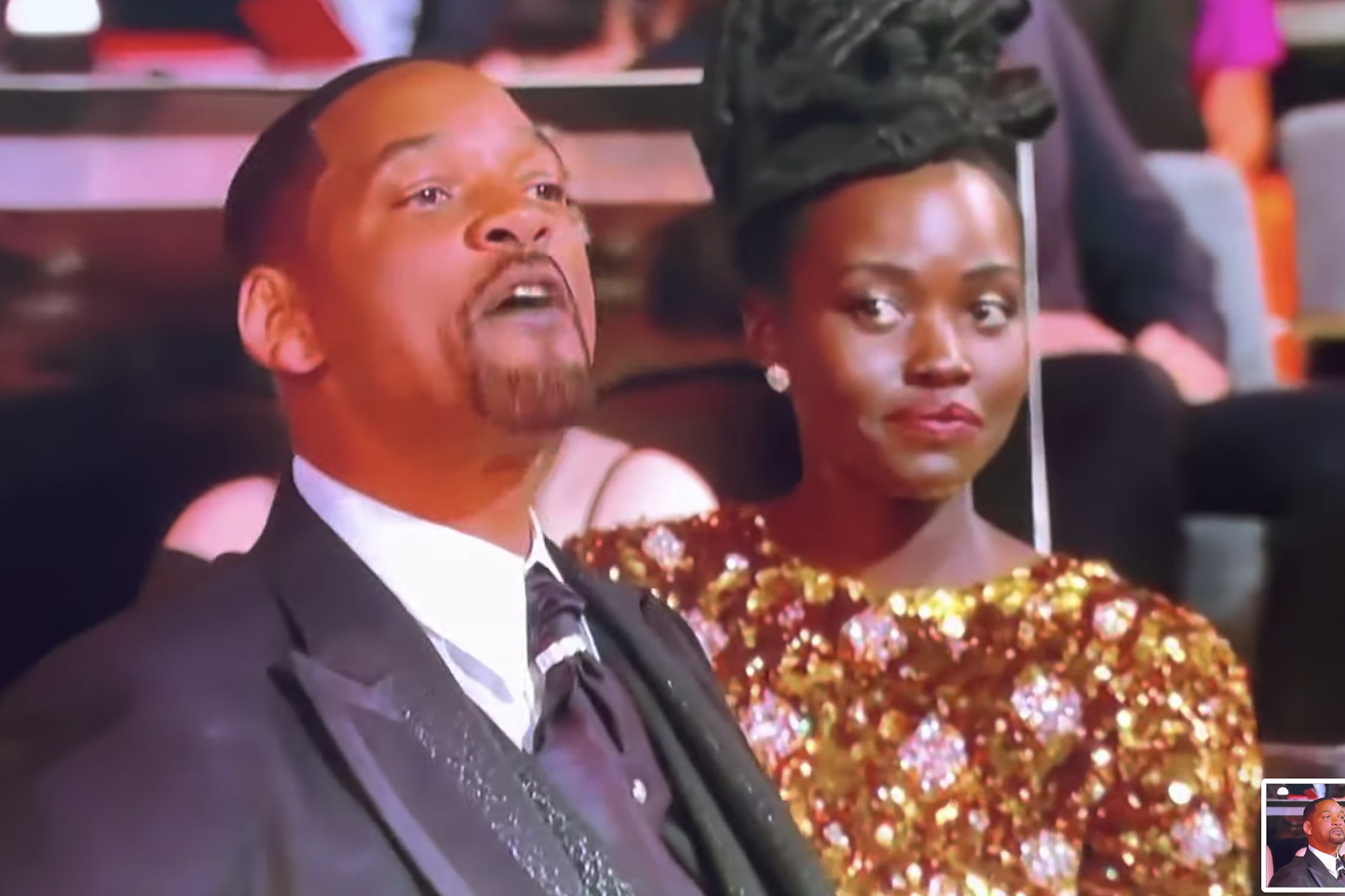 Meanwhile, it was clear that Smith would not be leaving the ceremony. “Everybody started to realize ‘Oh my God, he’s going to get back up there,’ they did not escort him out,” said Matt Belloni, the former editor of the Hollywood Reporter on the podcast.

Music magnate Diddy attempted to smooth things over on stage as he appeared to introduce a 50th anniversary tribute of “The Godfather.”

“OK, Will and Chris, we’re going to solve that like family at the Gold Party, OK?” referring to the Oscars afterparty hosted by Jay-Z and Beyoncé. “But right now we are moving on with love. Everybody make some noise!” 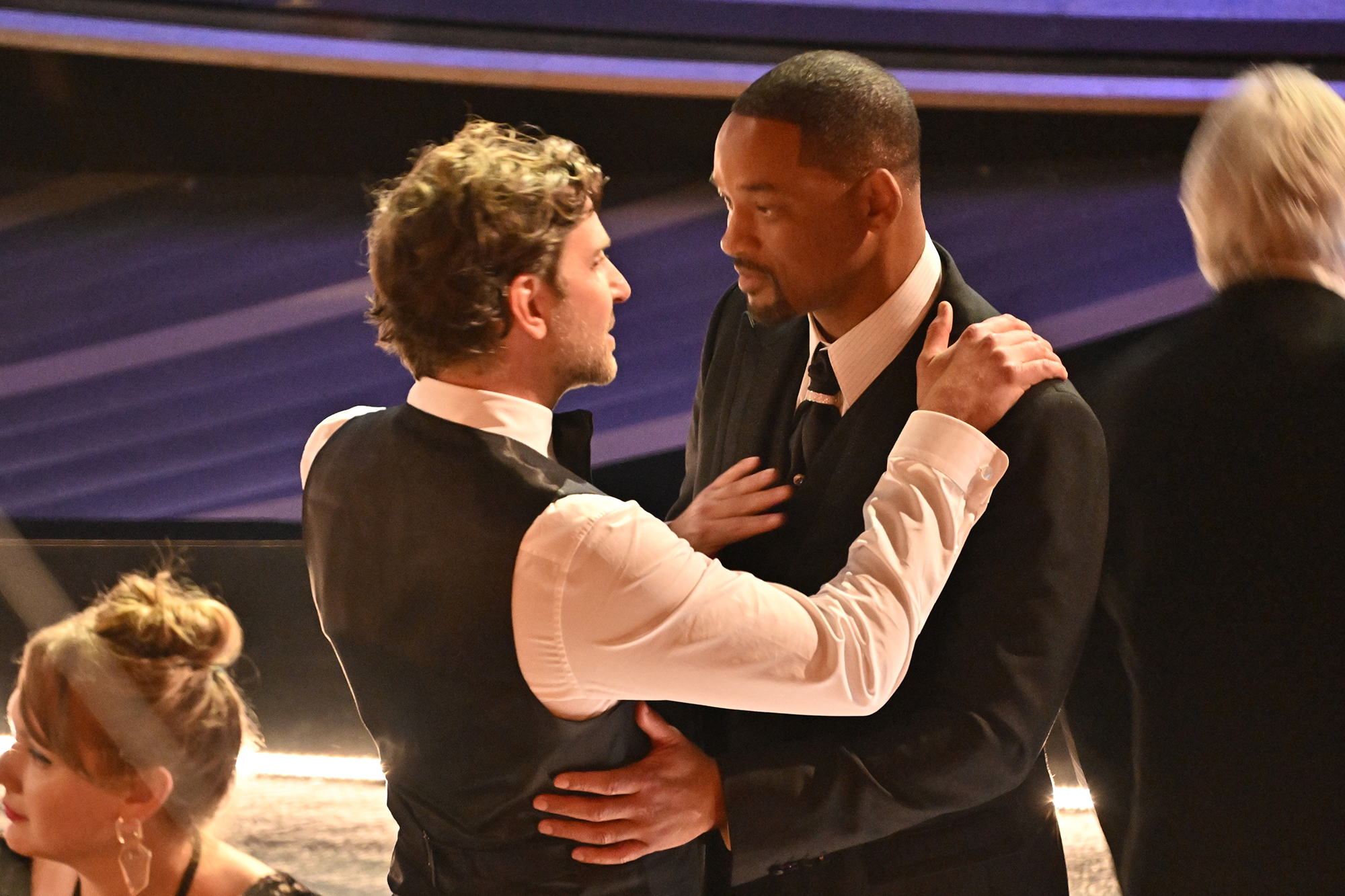 The backstage industry source said: “Diddy was minutes from getting on stage when the slap happened. He was trying to stay in the moment and rehearse his script.

“He wanted to thank Will Packer and Shayla Cowan for an incredible show, as the first-time black producers, and to thank the hosts. But he wanted to lift up the room, show Will and Chris they are family and bring them back together. He went up to Chris backstage and gave him a hug, they had a private conversation and went to Will in his seat and hugged him too.” 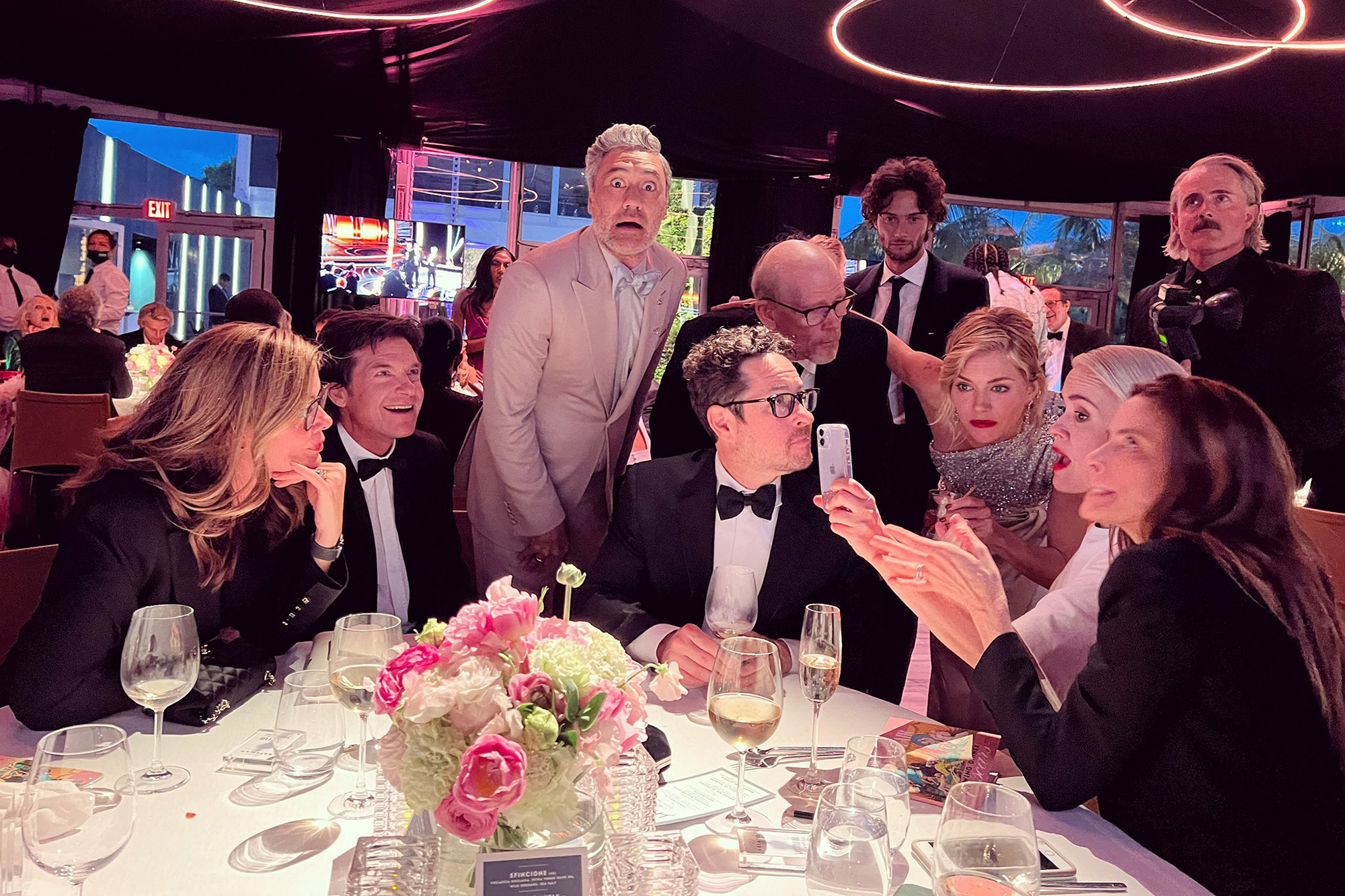 “How and if they resolved it is up to them — to him, his intention was to bring love to them and say a few words of encouragement and be a part of that.”

Smith’s rep O’Sullivan Wasson was also seen during every commercial break at her client’s side talking to him quietly until the Best Actor category was announced about 40 minutes after the slap. It’s believed she helped Smith rewrite his acceptance speech, in which he apologized to the Academy but not to Rock personally for his moment of rage.

As expected, Smith won his first Oscar for playing Richard Williams, the father of tennis legends Serena and Venus, in the movie “King Richard.” He kissed his wife and bounded up on stage. 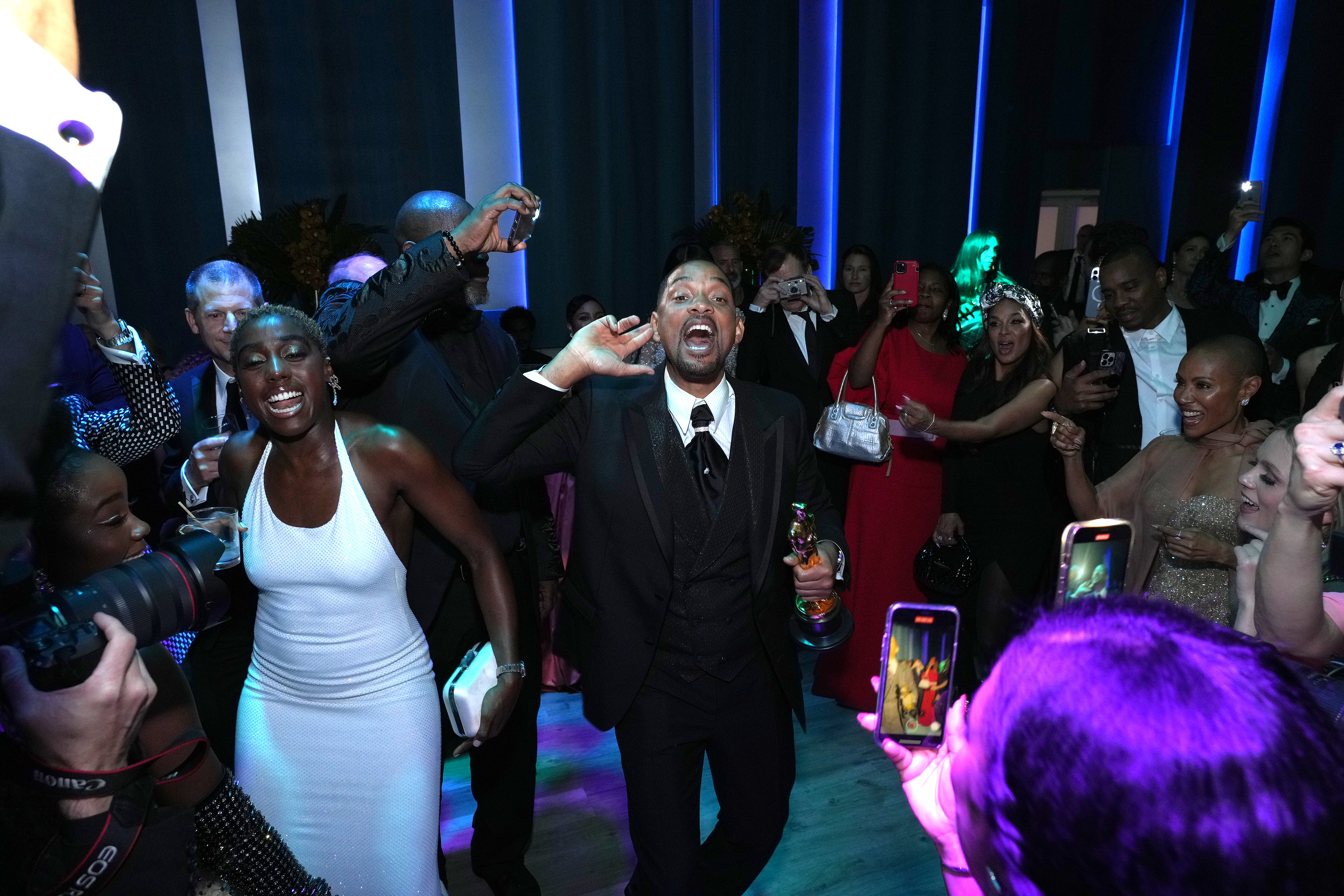 Despite his act of violence, the crowd gave him a standing ovation, although Belloni said that some people in his row refused to clap.

Instead of going to the press room after his win, as is the norm, Smith returned to his seat, where he held hands with his wife. Meanwhile, his “King Richard” co-star Aunjanue Ellis sat next to him and placed her hand on his arm, as all three watched “CODA” win Best Picture.

Smith, who is also a musician born in West Philadelphia, was later seen with his entire family, including kids Trey, 29, Jaden, 23, and Willow, 21, at the swanky Vanity Fair party, dancing to his own hits including “Gettin Jiggy With It.” Before the show, he and Baltimore-born Jada had posted a picture of themselves to Instagram looking tough. After the show, Smith added a comment: “You can’t invite people from Philly or Baltimore nowhere.” 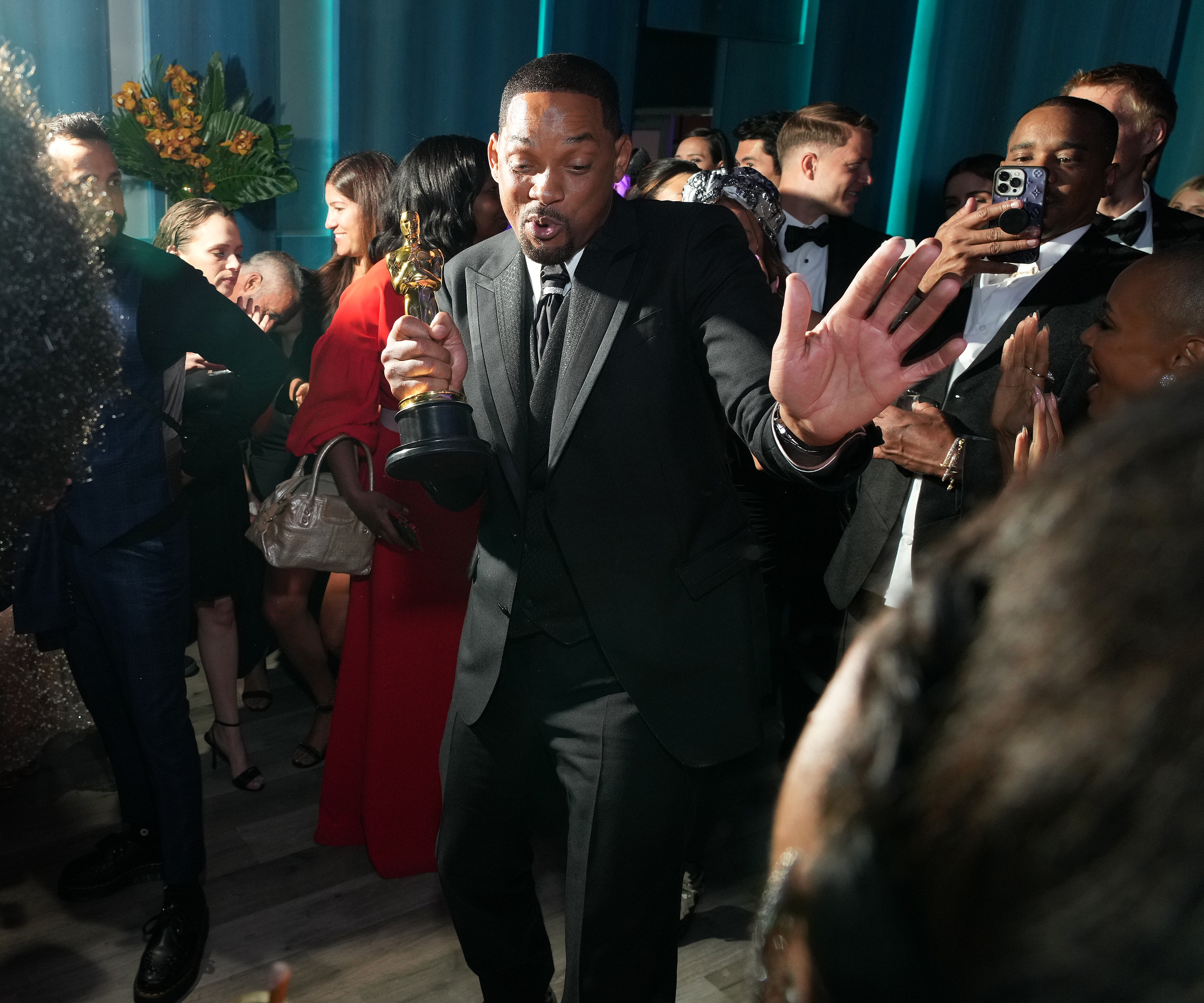 “He’s OK, he went to be with his best friend,” said the source who knows Rock. “Bottom line — you don’t hit people, it was a joke.”

True to his character, the Los Angeles Times reported that Rock also made a joke about the slap. Backstage, the comic said, he “just got punched in the face by Muhammad Ali and didn’t get a scratch.”

By Monday afternoon, Smith had finally apologized to Rock on Instagram. “I would like to publicly apologize to you, Chris,” he wrote. “I was out of line and I was wrong. I am embarrassed and my actions were not indicative of the man I want to be. There is no place for violence in a world of love and kindness.”