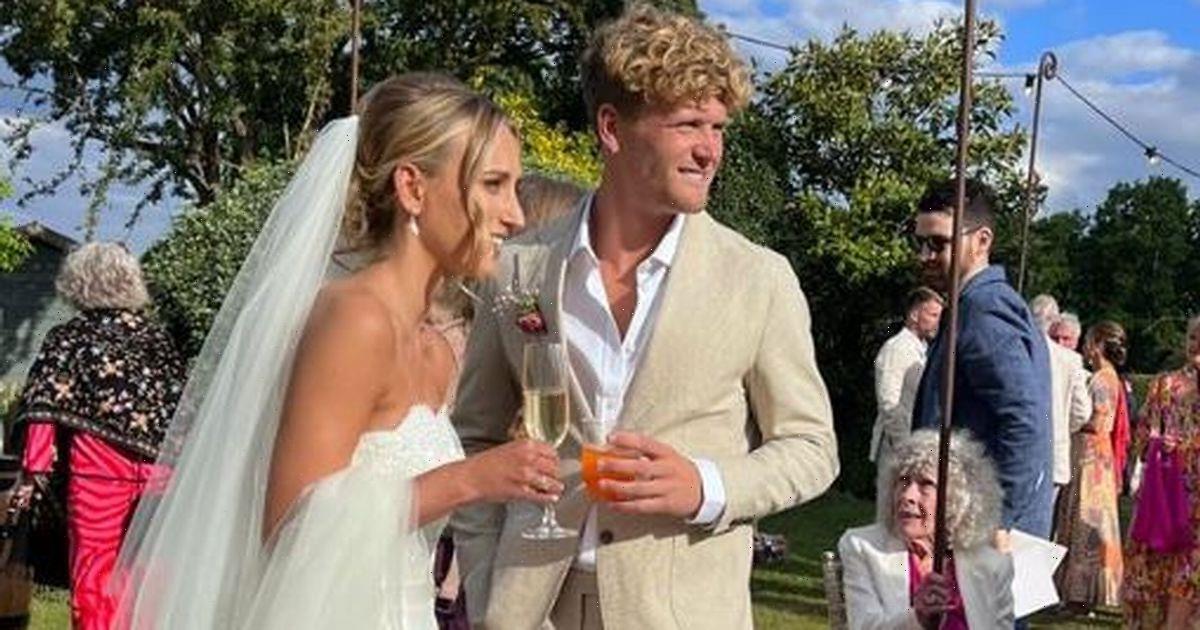 Made in Chelsea’s Tiffany Watson tied the knot with footballer Cameron McGeehan in a beautiful rustic wedding on Saturday 28 May.

The reality star, 28, and Cameron, 27, invited their nearest and dearest to celebrate their love, including many MIC castmates.

The bride enjoyed a luxury hen do in Saint-Tropez last week to soak up some sun before the big day with her bride squad, including maid of honour sister Lucy Watson.

Snaps from guests show fans a glimpse of the event, which was attended by the likes of Sophie Habboo, Melissa Tattam, Ruby Adler, Jamie Laing, Beth Pickard, Julius Cowdrey and Ed Bezzant.

After the church ceremony at St Michael and All Angels Church in Pirbright, Tiffany and Cameron were showered with flower petals by friends and family to celebrate the new husband and wife duo.

Guests were then taken to the reception on an interesting mode of transport – a tractor trailer.

The reception ceremony was set within a huge tipi tent, with wooden tables for guests to sit and enjoy the speeches, drinks and food. Tiffany and Cameron were seated at the head table with chairs labelled with ‘Bride’ and ‘Groom’ on wooden plaques.

Flowers were beautifully placed everywhere during the wedding, with sister Lucy Watson snapping a picture of a huge bunch of colourful flowers on Instagram and the pink floral head crowns worn by the bridesmaids. The weather appeared to pull through for the couple, as guests were seen enjoying the May sunshine and even roasting marshmallows over a fire as the evening began to set in.

Outside, there was a huge Krispy Kreme doughnut wall, Aperol Spritz trolley for guests to tuck into, a barbecue as well as a pick ‘n’ mix stand, which were signposted on a colourful post. Tiffany had previously told her followers on Instagram that the food served would all be vegan.

She wrote: “We are doing it vegan yes. Canapes to start, then doing a bbq with lots of delicious side dishes and salads and some fun pop ups for dessert.

“And late night sourdough pizzas… so much food!” The couple even brought their pooch Kiki to the ceremony, with Beth Pickard calling her "the best bridesmaid".

The party moved to the dance floor inside the teepee as the night progressed, with the loved up couple enjoying their first dance together under the colourful lights. Then the guests all ended up on the dance floor, enjoying the music from a DJ and from a saxophonist.

There was also a photo booth for the attendees to snap pictures of the occasion dressed in fun props, such as a wacky panda head. Tiffany and Cameron, who is a footballer for Belgium team KV Oostende, have been together since 2020, confirming their romance in September 2020.

Cameron proposed to his now wife during a romantic trip to Paris in October 2021.