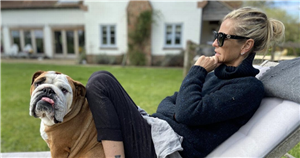 Celebrity SAS: Who Dares Wins is back for a brand new series this September, and has kicked off with some serious drama on the Channel 4 challenge show.

Ulrika Jonsson is one of the show's many celebrity contestants, and is joined by the likes of Kerry Katona, Wes Nelson and Katie Price, who will all be put through their paces by hardman Ant Middleton.

The blonde bombshell is a familiar face to many due to her long career in the limelight, but others aren't as familiar with the TV star.

We take a look into Ulrika's life off-screen, including her children, partner and her lovely home.

Here's all you need to know about Celebrity SAS star, Ulrika Jonsson…

Who is Ulrika Jonsson and what does she do for a job?

Ulrika Jonsson is a Swedish TV presenter who has made a name for herself in British TV.

The stunning 54-year-old started out her career as a weather presenter and also worked as a model.

Throughout the 80s and 90s, Ulrika became a household name in the UK after she landed jobs presenting the likes of Gladiators and the Eurovision Song Contest.

Since then, Ulrika has stayed in the limelight appearing on shows such as Big Brother and even Dancing on Ice.

The fitness and foodie fanatic has over 170K followers on Instagram, where she frequently updates her followers on her day-to-day life.

How many children does Ulrika have?

Ulrika is a mum of four, with her youngest child now 13 years old, and her eldest 27.

Her first child, a son called Cameron, was born in 1994, and his father is cameraman John Turnbull.

She is now 21-years-old and has headed out to work as an au-pair abroad.

In 2004, Ulrika had a daughter named Martha with TV show contestant Lance Gerrard-Wright.

Ulrika posted a snap on May 27, 2021, to celebrate Martha's 17th birthday, calling her "the whole package and then some".

Her youngest child is a 13-year-old son called Malcolm, who she gave birth to in 2008 with Brian Monet.

Does Ulrika have a husband?

Currently, it's unknown whether Ulrika has a partner, but the star has been married three times in the past.

She first tied the knot with John Turnbull in 1900, who fathered son Cameron, but the pair divorced in 1995.

In 2003, she married Martha's father Lance Gerrard-Wright, but unfortunately things didn't work out and they split three years later in 2006.

Ulrika and Brian Monet married in 2008, the same year their son Malcolm was born, but the couple divorced in 2019.