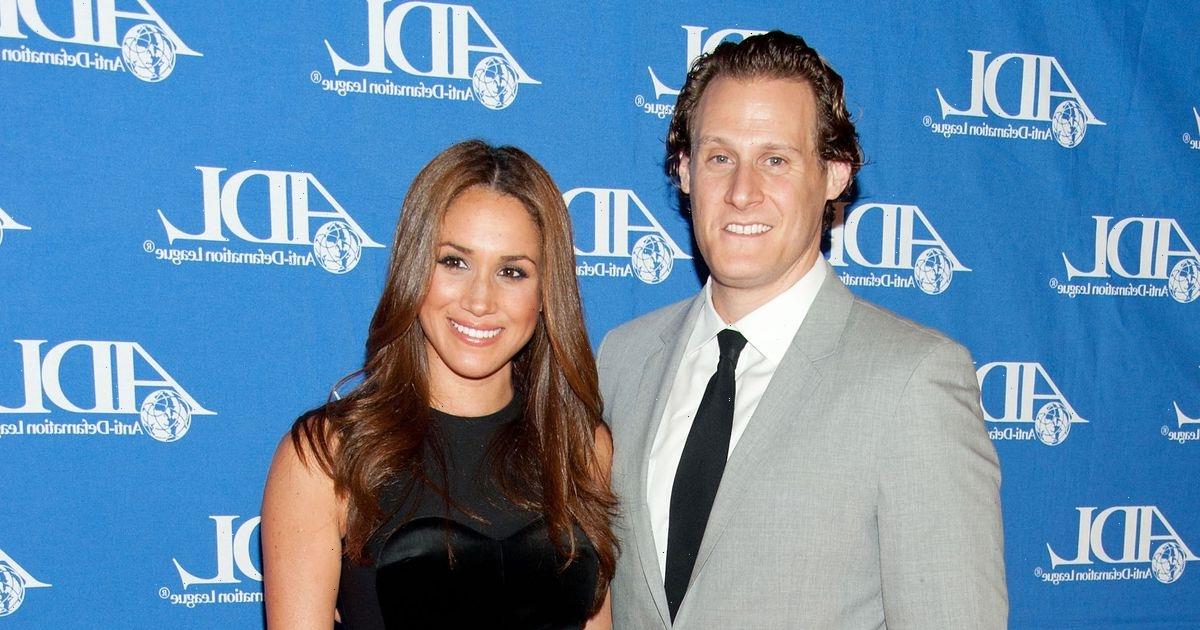 Before Meghan Markle became the Duchess of Sussex she was previously married, making her one of the first divorcees to wed into the Royal family.

The couple were married for three years, before separating after increasing periods of time apart following the advancement of Meghan’s acting career.

Now, photos have been unearthed showing more images from the big day and the world is revisiting the Duchesses’ ‘starter marriage’.

Trevor Engelson is a US-born producer and actor whose best-known credit is the film Remember Me starring Robert Pattinson.

They married at the luxury Jamaica Inn in Ocho Rios, Jamaica putting on a four day event for 107 friends and family.

The hotel boasts 25 suites and a private beach, and is very different from Windsor Palace where she would go on to marry Prince Harry.

At the time Meghan was 30 years old and her husband was 35.

She wore a strapless white dress with a silver jewelled belt which has been compared to the second dress worn by Kate Middleton at her wedding in 2011.

In the past, before she married Harry, Meghan said she preferred "classic and simple" wedding dress designs.

"I personally prefer wedding dresses that are whimsical or subtly romantic," she told Glamour back in March of 2016.

After a quick ceremony, the bride, groom and their guests hit the dance-floor and partied the night away.

However, in 2013, the couple filed for divorce citing “irreconcilable differences”.

It’s believed that the decision had a lot to do with Meghan moving to Toronto after landing her part in Suits.

The couple struggled with long-distance as Meghan filmed in Canada while Trevor was based in California.

According to an excerpt from Andrew Morton's biography of Meghan, Meghan: A Hollywood Princess, "A wealthy entrepreneur friend claimed the marriage ended so abruptly that Meghan sent her wedding and engagement rings back to Trevor by registered post.

"Another confirmed that the decision to end the marriage was made by Meghan and that it had come 'totally out of the blue'."

Morton wrote that a source close to Trevor said that he went from cherishing Meghan to “feeling like he was a piece of something stuck to the bottom of her shoe.”

Meghan’s friend and maid of honour from the wedding, Ninaki Priddy, has since said she ended their friendship due to Meghan’s treatment of Trevor.

Ninaki toldThe Express: "The way she handled it, Trevor definitely had the rug pulled out from under him. He was hurt."

Meghan’s former co-star and friend Abby Wathen said she and the actress bonded over going through divorces at similar times. “I was destroyed [after my divorce], but [Markle] was empowered. She took her power back. It wasn’t the right relationship for her, so she moved on,” she said.

When the marriage ended, Meghan posted her engagement ring back to Trevor.

Andrew Morton reported that Trevor “could barely contain his anger” when he received it.

A source toldThe Sunthat the producer struggled with the relationship breakdown.

“The split with Meghan hit Trevor pretty hard. He went through a rough time during the break-up and that was only made worse when Meghan got together with Harry.

"He had to re-live it all again — this time in public. It wasn’t the most amicable of divorces and there were hurt feelings on both sides. Now he has bounced back and things are looking great for him.”

Trevor has since gone on to marry and father two children with dietitian Tracey Kurland.

Trevor has since used his experiences to pitch an idea for a TV show that has been greenlighted by the FOX network.

He approached the channel with an idea based around a man whose ex marries a British royal.