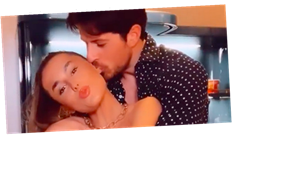 Amber Davies has only been official with her new boyfriend Nick Kyriacou for a few weeks but they’ve already jetted off on their first holiday together.

The loved-up couple have flown to Dubai to stay in the same lavish hotel as TOWIE star Jess Wright, the FIVE Jumeirah Village, which Amber shared a peek inside as she took to Instagram.

Love Island winner Amber flaunted her lithe figure in an array of bikinis as well as plenty of sweet selfies with her man who seemed only too happy to pose for the camera alongside his girlfriend.

Amber, who has had success in musical theatre since winning Love Island, went out for a swanky dinner on their first night where Nick pretended it was still her birthday.

Get exclusive celebrity stories and fabulous photoshoots straight to your inbox with OK’s daily newsletter. You can sign up at the top of the page.

Amber Davies is on her first holiday with her new man Nick Kyriacou, jetting off to Dubai for a romantic break in the sun.

Love Island star Amber donned a bronze coloured zebra print bikini, striking the perfect model pose while standing in the water with the beach as a backdrop.

Amber shared a glimpse at their hotel suite as she filmed a selfie video in the mirror, posing in her bikini and explaining that they had slept until 4pm after arriving.

Amber and Nick went down to the beach to sunbathe and sip on cocktails as they marked the first day of their holiday.

Amber was all loved-up with Nick as the couple splashed around in the water while filming themselves. She grinned away as he held her up.

Nick was behind the camera for all Amber’s stylish outfit photos but she grabbed his hand in a classic Instagrammer pose. She added the caption: "Together is a wonderful place to be… thank you @fivepalmjumeirah for the warmest welcome!"

While the couple were down on the beach they witnessed staff setting up a proposal for another guest with light up signs that read ‘Marry Me’. Amber filmed it and cleared up any confusion: "It’s not for me (unfortunately) but how cute is this"

Amber shared a make-up tutorial showing how she gets her eyebrows bushy before Nick joined her as they messed about pulling poses.

Nick took Amber out for dinner at famous Dubai restaurant Nusr-Et Steakhouse where he pretended it was her birthday and was presented with a dessert made table side. She grinned and said thank you to the waiter but on the caption wrote: "I hate him for this. 4th October and we’re still celebrating my birthday!"

Amber was already on the cocktails and by the beach as she woke up ready for the next day of her holiday in Dubai with Nick.