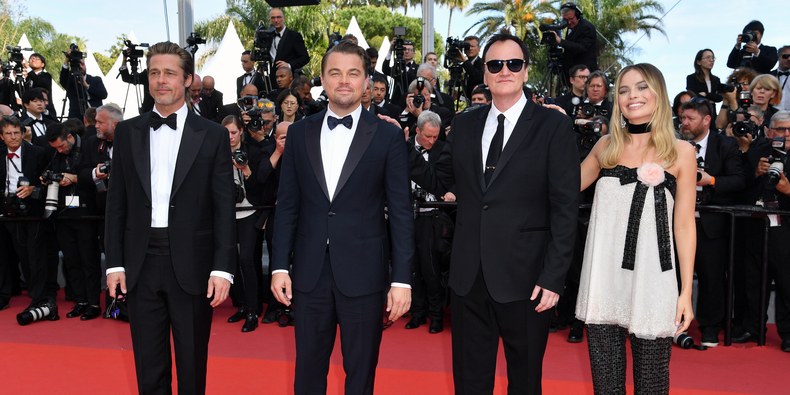 In & Out is W*'s guide to what's hot and what's not each week. Subscribe here and stay up to date by getting the newsletter delivered early to your inbox each week.*

"Success is a beast. And it actually puts the emphasis on the wrong thing. You get away with more instead of looking within."—Brad Pitt

Kanye West once publicly implored Twitter's CEO, Jack Dorsey (or @Jack, as he’s known on his platform), to do away with likes. Dorsey said he’d consider it, but when a redesign of Twitter’s website was unveiled last week, the like count was still there, and it was animated to update as a tweet’s like count climbed. The stats below a viral tweet basically now look like a Las Vegas slot machine. So much for one of the few sane things West has committed himself to in the past few years. Instagram, however, appeared to be listening. The Facebook-owned app has started testing hiding the like count in several countries. The company is not only worried that such vanity metrics are impacting people’s mental health but also that the stress of anticipating what might get a like and what might not is preventing people from posting more often to their grids (compare that to IG stories, which has no like feature, and where some people frankly feel just a little bit too comfortable posting whatever nonsense they feel like). This may be good news for humanity, but influencers are a little upset. After all, their endorsement and #SponCon deals (and maybe, in some cases, their self-esteem and sense of self) depend on engagement metrics that take likes heavily into account. Some are now freaking out about their bottom line. And sure, as journalists we certainly know what it’s like when the shadowy machinations of a Silicon Valley tech giant, more concerned with its income than yours, suddenly puts your industry in pure panic mode, but there are some indications that the IG like change may not, for better or worse, lead to the end of the age of the influencer. The company says it will still maintain metrics to help those who do business on the platform.

Whatever team Mariah Carey has hired to help her with social media is certainly working hard. The R&B singer has birthed many an unintentional meme (“I don’t know her” and “Suddenly I can’t read” among them), but now she’s ascended to another level. She’s no longer an unintentional meme creator, but rather an intentional meme ender. She’s like the Thanos of the Internet. Earlier this year, when the ten year challenge (in which people posted current pictures of themselves alongside ones from a decade before) was making its way around the Web, she shook it off by just posting the same pic twice and writing “time is not something I acknowledge.” This summer, when the bottle cap challenge was all the rage, Carey flipped it up by employing her legendary whistle register. Now, with the FaceApp “old people face” filter taking our social feeds by storm, Carey simply wrote, “FaceApp is not something I acknowledge.” The lesson is, once Carey gets to a meme, it’s done. It’s over. No one else should try it. She is, after all, an eternal headliner, and the rest of us in meme-land are just the opening acts.

The critical buzz around Quentin Tarantino’s Once Upon a Time in Hollywood has been strong ever since it premiered at Cannes back in May, so the Tarantino faithful should be pleased. The director is in top form here. Plus the star-studded cast, led by the dream team (and alleged pottery pals) of Leonardo DiCaprio and Brad Pitt, and the plot’s interpolation of the well-known American lore of the Manson murders, should help it reach even larger audiences than the popular director is accustomed to.

So maybe it’s not too early to start wondering if this could finally end up being Tarantino’s big year at the Oscars? It would be incorrect to say that the Academy Awards aren’t friendly to QT, but he's never actually owned the night at a ceremony. None of his films have ever won Best Picture, and he’s never won Best Director. The fact that Tarantino says he’ll retire after ten films (this is his ninth) almost seems like a dare to the academy to give him one. And why not? The Oscar voters are suckers for films that are about show business or set in Southern California, and unless something else emerges during festival season, it’s easy to see Hollywood achieving major contender status by default. There’s even buzz that, if he’s put in the supporting actor category, A-list institution Brad Pitt might have a good chance of picking up his first acting Oscar ever.

In any event, it is kind of nice that the big new movie in theaters this weekend isn’t a reboot, animated, or a superhero flick. Though if you do want superheroes, Amazon Prime has you covered. Its new franchise The Boys is based on a comic book series that, to be very blunt, imagines a world in which superheroes fuck. The masked heroes revel in their celebrity and live large and loose like Hollywood bad boys and some of them are recruited by the CIA to keep tabs on the others. It will be interesting to see how the show interprets its source material for the post-#MeToo moment (some of our “heroes” have downright Weinsteinian morals), but a star-studded cast—including the '80s and ‘90s icon Elisabeth Shue, *Gossip Girl’*s Chace Crawford, and the sci-fi/fantasy veteran Karl Urban—has signed on, and early reviews are promising. Luckily, the show’s bad boy focus is easily balanced out by this weekend’s other big streaming service premiere: the final season of Orange Is the New Black, Netflix’s history-making marquee program.

A daughter of Judd Apatow and Leslie Mann, Maude Apatow is currently making a name for herself on Euphoria. Check out our interviews with Apatow, and some of TV's most exciting talent, including Billy Porter, Natasha Lyonne, and more here.