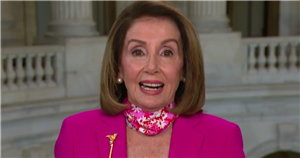 Speaker of the House Nancy Pelosi was on Capitol Hill when a violent mob broke in — and she says if they confronted her, she could have fought them.

Pelosi was safely evacuated from the U.S. Capitol by security when insurrectionists stormed the building, wanting to kill her. “That’s what they were setting out to do,” Pelosi told USA Today in a wide-ranging interview.

When asked if she was frightened during the January 6 incident, the House Speaker said: “Well, I’m pretty tough. I’m a street fighter. They would have had a battle on their hands.”

She then lifted up her foot, showing a stiletto heel she could have used as a weapon. “I would have had these,” she joked.

“I was never personally afraid because I had so much security for myself,” said the California Democrat. “I was afraid for everybody else, and I’ll never forgive them for the trauma that they caused to the staff and the members.”

She said many who were there are still dealing with the effects. “I do think it will have an impact on how people decide to come to work here or stay to work here and the rest,” she said.

Days after the deadly event, fellow congresswoman Alexandria Ocasio-Cortez spoke about the trauma induced by the insurrectionists.

During a live stream on Instagram, Ocasio-Cortez said she thought she was going to die during the rioting. The New York Democrat called the event an opportunity for people to talk about trauma, adding that there had been counselors and physicians in the House to talk to people after they were exposed to trauma during the rioting.

While Pelosi and other lawmakers made it out safely, their space was still violated. The day of the insurrection, photos circulated widely showing a man inside Pelosi’s office with his feet resting on her desk. He was later identified as Richard Barnett, of Gravette, Arkansas, and was taken into custody.

Another insurrectionist, Riley Williams, was accused by a former romantic partner of stealing a computer from Pelosi’s office during the riot. Williams is facing charges, according to court documents released in January.

The amended criminal complaint cites a video from that day in which Williams allegedly instructs a man to put on gloves before he touched Pelosi’s laptop, and claims she can be seen entering and leaving Pelosi’s office.

During the USA Today interview, Pelosi spoke about legislation to increase Capitol security. She also suggested that she might be open to establishing a congressional committee to investigate the insurrection — should the independent 9/11-style commission she has called for not come to fruition.

However, Pelosi compared the prospective committee with one created to investigate the 2012 attack in Benghazi, Libya, that killed U.S. Ambassador Chris Stevens, which had a Republican majority.

“It’s always an option,” she said. “It’s not my preference in any way. My preference would be to have a commission.”