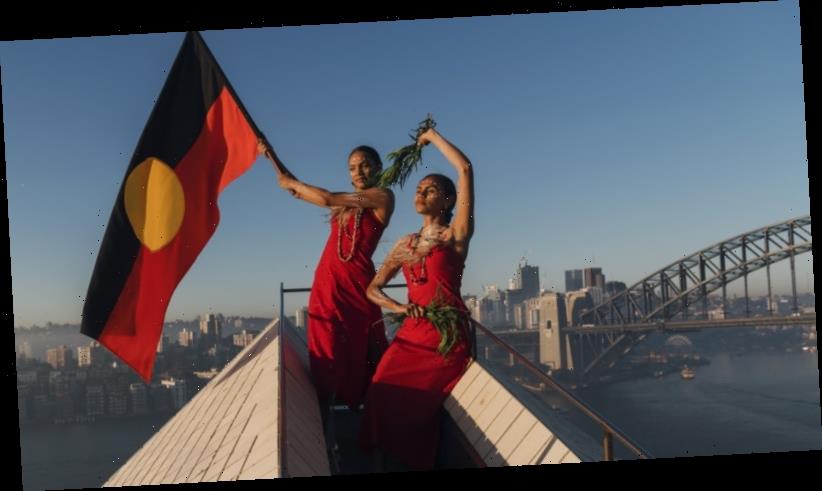 When Rita Wright first witnessed the explosion of colour and culture that is Dance Rites, she was stunned.

As a child of the Stolen Generations, she’d been forbidden from speaking language or practising her Aboriginal culture. She never thought she’d see hundreds of First Nations dancers from across Australia and the world proudly showcasing their culture at the Sydney Opera House forecourt. 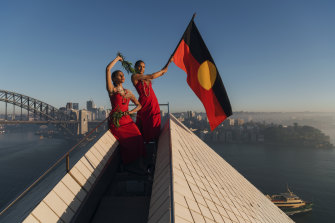 Abigail Delaney and Dubs Yunupingu from the Jannawi Dance Clan, from the Darug nation, flying the Aboriginal flag on top of the Opera House to promote Dance Rites, a celebration of First Nations dance.Credit:James Brickwood

"I couldn't believe how lovely it was and to see the strength that everyone had,” she said.

On Saturday, the 66-year-old will fulfil that promise, having reclaimed her identity after decades of loss, reconnection and learning.

Ms Wright, or Aunty Rita as she’s known to most, was two when she and her sister were taken from her family’s home at Weilmoringle, north of Brewarrina in north-west NSW, and placed in state care. 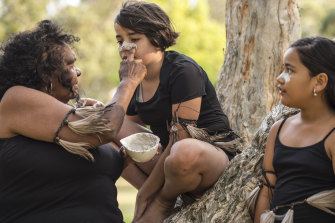 She spent her childhood at various Aboriginal children’s homes, where she says the kids were “treated like slaves”, before running away to Sydney at age 15.

It was there someone spotted her on the bus and remarked on her uncanny resemblance to a woman named Grace living in Brewarrina. They struck up a conversation and Ms Wright discovered Grace to be her mother.

After two years on the streets of Sydney, she’d saved enough money to travel to Brewarrina. In 1970, at 17 years of age, she boarded a train to meet her mother for the first time.

Grace had become mute after her daughters were taken. Upon seeing Rita, whom she called by her middle name, Jean, she spoke her first words in years: “My Jean has come home.”

Ms Wright learned that her mother, separated from her own daughters, had taken in other children who needed a place to go, earning her the nickname Nana Grace. She even wore a badge around town bearing the moniker, so no one would mistake her.

It’s a duty that Ms Wright, now a respected elder living in Mt Druitt, has taken on as her own, especially since her beloved mother’s death two years ago: “We're the ones that look after our grannies [grandchildren] … they're our next generation, see?”

And while Indigenous culture is now celebrated rather than outlawed, she says Aboriginal and Torres Strait Islander children are still over-represented in the foster care system, often fracturing their sense of identity.

In 2018, Indigenous kids were ten times more likely to be living in out-of-home care than non-Indigenous children nationally, data shows. Around four in ten were placed with Indigenous carers or family members.

Determined to keep local youth strong in their culture, Ms Wright decided to form a dance group to bring elders and young people together.

“I watched [Dance Rites] a couple of times at the Opera House there, and I just said ‘oh wouldn't it be nice to have Mt Druitt, all our grannies out there and our babies’,” she told the Herald.

"Mt Druitt's always been put down. We just want to show them that Mt Druitt have got something and [we] still respect our culture."

Under the leadership of dancer and choreographer Ashleigh Wright, Gracie’s Grannies was born. 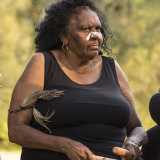 Rita Wright is the eldest dancer at 66, while her seven-year-old grandson, Robbie, is the youngest.

This weekend, they will perform publicly for the first time at Dance Rites. A “very proud” Ms Wright knows her mother will be watching: “She’ll be looking down on us.”

Gracie’s Grannies will join more than 300 performers from the Torres Strait to the Kimberley to compete for a $20,000 grand prize at the annual Indigenous dance competition.

But performers say it’s about much more than money.

“It’s just the fact that we have different mobs from all around the country that come together and share culture,” said Dubs Yunupingu who will take the stage with the Sydney-based Jannawi Dance Clan.

“I feel really tall you know, just really strong and grounded when I dance and ochre up and I just feel so connected to mother earth, my ancestors."

The 22-year-old invites onlookers to share in the experience.

“It's so special to be able to witness dances and songs that have been passed down for a very long time,” she said.

“I just hope they feel the same love and connection that we do when we dance.”

Dance Rites will be held on November 23 to 24 at the Opera House forecourt.

This article is brought to you with the support of the Judith Neilson Institute for Journalism and Ideas.