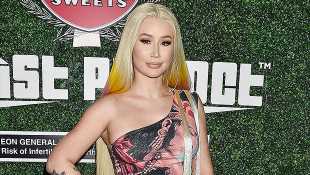 Iggy is BACK. On the same day that the rapper dropped her new album, she slayed in a series of sexy outfits in the music video for ‘F**k It Up’ alongside Kash Doll.

It’s a new era for Iggy Azalea, 29. The rapper’s new album, In My Defense, has arrived and it’s twelve tracks of pure FIRE. Plus, after releasing “Sally Walker” and “Started,” the female MC dropped a new video for “F**k It Up” on the same day that her album arrived. The super steamy clip was released with fellow rapper Kash Doll, 27, and both ladies slayed from start to finish! In the clip, Iggy and Kash have a slumber party together before then hitting the streets and having a dance party in a convertible car. Iggy and her co-star looked incredible in a series of teenie-tiny outfits throughout the clip, which closed with them hitting a “prom” night together. The two ladies were seen twerking on the dance floor in matching latex outfits and this video was NOT for the fainthearted!

Of course, every track off Iggy’s new record is worth a spin. It’s been a long time coming for the album, the rapper’s first as an independent artist. While the “Fancy” hit-maker was nervous about the release, she was also excited. Ahead of the album’s July 19 arrival she took to Instagram with a message for fans while teasing the album. “My album & a music video drop in 12 hours & im actually gonna throw up; but this picture is how I WANT to feel,” she wrote, alongside a selfie. She looked excited in the snapshot, donning a vibrant outfit with an array of neon colors.

Earlier this year, HollywoodLife caught up with Kash, who told us why she thinks there’s more female rappers commanding the music scene now more than ever. “I feel like cause they hadn’t paid attention for so long, until now. There was only one. So, I feel like now there’s a few more and that’s half the battle. And a lot has happened with R&B and it kind of opened doors to now, and welcomed more girls in. I think people felt like they were missing out, because a lot of girls keep making good music that we love,” she told us. You can catch her sexy new video with Iggy above!