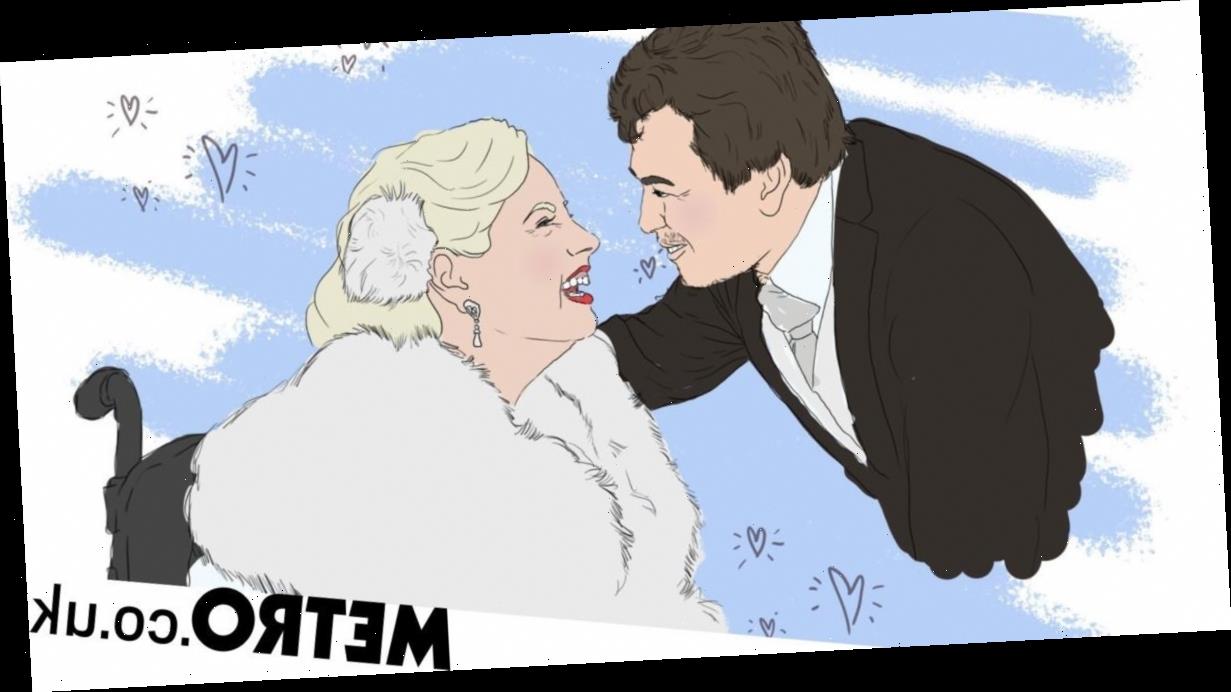 Amsterdam airport isn’t the first place you’d imagine a romantic first date – especially with your mum in tow – but then again as someone with locked-in syndrome my life isn’t exactly what you’d call ordinary.

Locked-in syndrome means that I am, essentially, locked into my body. I am only able to move my eyes and I can’t speak or eat without someone feeding me.

I was set to meet Henning, a man I’d been chatting to online for eight months, and it was clear there was something special between us. I knew we had to meet in person.

I decided to stop over in Amsterdam, where he lived, from my home in Finland for a night on my way to California, but seeing Henning waiting patiently for me at check-in was terrifying.

I’d been honest about my condition but I kept asking myself, ‘would he really not care that I was in a wheelchair and could only communicate using my eyes?’

Amazingly the answer was yes and as Henning took me for a stroll around the airport, we immediately felt like two old friends.

I ‘talk’ by moving my eyes towards letters on a board and luckily Henning mastered it pretty quickly.

In fact, we got on so well that I stopped over on my way back too and it was then we decided we could make our relationship work.

Henning wasn’t the first man I’d dated since having a stroke, aged 21, but he was the first I could imagine a future with.

Before that I’d been a successful model, working in amazing places like the Bahamas, Italy and America. Then, one day in January 1995, I’d been watching TV with my mum when I suddenly started feeling dizzy.

I felt as though I was drunk and I couldn’t get my words out, so my worried parents rushed me to hospital.

There, to my horror, I started losing control over my body and could no longer move my arms or legs. ‘I’m not paralysed,’ I reassured my mother, ‘I’m just too tired to talk.’

Those were the last words I’d ever say out loud.

Three days later a neurologist explained I’d suffered a stroke and the damage was so severe I was left with locked-in syndrome. I remember feeling utter shock and misery.

I spent a month in hospital and learnt how to communicate. Then I was transferred to a rehab clinic where I was eventually able to support my own neck, chew food, and use a computer without using my hands.

Seven months later I moved back to my parents’, where a nurse helped care for me. Emotionally I was at rock bottom.

I cried constantly, howling so loudly a neighbour thought we’d bought a dog. Every day I begged my mum to kill me.

By writing down my experiences I started to heal emotionally but it took around two years until I realised I could still have a life worth living.

I started a blog and began advising medical professionals on dealing with locked-in syndrome. Slowly, I began to appreciate the small things in life. It’s amazing how much pleasure you can get just from feeling the sun on your face.

But I hadn’t expected to find love. In 2009, when Henning and I first got chatting on a website about Aruba, where we had both lived, I was reluctant to tell him about my condition.

He brought it up after noticing a wheelchair in some of my photos, writing ‘you must be an exceptional person’. His caring response meant I decided to open up.

I fully expected him to take a swift, if polite, exit – but to my surprise he carried on our conversations as normal. I was shocked but secretly ecstatic.

Henning was nine years older than me but so eloquent and interesting I felt drawn to him immediately. I was struck by how similarly we viewed life.

After meeting at the airport we fell so deeply in love that on Christmas Eve 2010 Henning moved to Finland.

Initially, living together was hard. I felt under enormous pressure because I was concerned about losing my privacy and the sense of self I’d spent so long putting back together.

I was worried our relationship would end abruptly and I’d be heartbroken but to my surprise it never did.

Instead our bond grew deeper and Henning got so good at using my plexiglass ‘air alphabet’ board to communicate that soon he could follow my eyes and understand me instinctively.

We married on a beautiful snowy day in December 2012. As we said our vows in an old mansion house I can honestly say I’ve never felt happier.

Now, nearly eight years on, our marriage is stronger than ever. People think our relationship must be more like a carer and patient but I have assistants to help with my needs, which means Henning can mostly focus on being my husband instead.

Of course, like all couples, we have the odd argument but we wait till my assistants have gone home and then spend an hour talking things through.

We never bottle anything up so our disagreements never linger.

Before the pandemic Henning and I loved travelling together. Now we spend time at home, walking our dogs and enjoying each other’s company.

We communicate all the time and no subject is off-limits.

I used to think of true love as just being about romance, but since meeting Henning I realise it’s far deeper than that. It’s the unity we share when things get tough and the care and respect we have for one another.

Henning makes me feel as though nothing is impossible.

As told to Natasha Holt

Kati van der Hoeven is the author of Living Underwater – a true story of laughter, love, hope and happiness in the face of extreme adversity.

Last week on Love, Or Something Like It: My ex and I are closer as friends than we ever were as a couple

Love, Or Something Like It is a regular series for Metro.co.uk, covering everything from mating and dating to lust and loss, to find out what love is and how to find it in the present day. If you have a love story to share, email [email protected]