Maria Garcia’s mother was weeping. It was March 31, 1995, and Garcia was nine years old. They were watching TV in their trailer home in El Paso, Texas and every station was carrying the same story. Someone famous had died.

“It was the first time I’d seen my mum mourn someone who wasn’t part of our family,” Garcia says. “That stuck with me.” 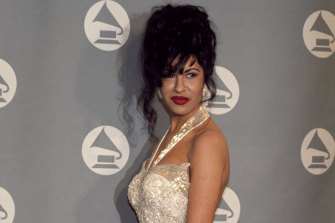 Selena picked up a Grammy award in 1994.Credit:Larry Busacca/Getty

The famous person was Selena – like Madonna, Beyonce and Cher, she didn’t need to use her surname, which was Quintanilla. She was a superstar in the Latino world, turning the Tex-Mex style of music known as Tejano into a global phenomenon.

Selena was shot in the back by Yolanda Saldivar, the president of her fanclub who had embezzled tens of thousands of dollars from her boss. Selena was 23 years old.

“For Mexican people in Texas, it felt akin to the Kennedy assassination,” says Garcia, who is managing editor at radio station WBUR in Boston.

Garcia opens each episode of her podcast Anything for Selena by saying it’s a show about belonging. She was born in 1985 in Ciudad Juarez, Mexico, but her family moved to Texas when she was three, “so I became very aware of my dual identity and knew what it felt like to not belong in either place. Selena was the first person in pop culture who embodied those two parts of myself. She wore her Mexican identity with pride.”

On the weekend of Selena’s death, shock-jock Howard Stern aired an offensive skit, adopting an accent and mocking Hispanic fans. Then he played a Selena song with gunshots in the background. When a respected Tejano DJ called in to protest, Stern ridiculed him and told him to go back to his own country.

“Because of what happened with Howard Stern, mourning Selena became an inherently political act,” Garcia says. “It started this whole conversation about who was American and who belonged here.” 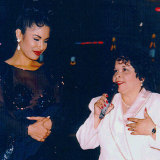 From the start, Garcia knew she would have to devote one episode to butts. Specifically, big butts. When she was young, the ideal female body shape in her community was curvy, with a large, rounded bottom. But at school, her white American friends considered a large butt undesirable and something to work at eliminating.

“Later, I remember a complete shift, when suddenly white mainstream culture decided the ideal body was more curvaceous, with a big derriere,” Garcia says. “I knew that Selena played a role in that cultural lineage and change, from deriding big butts to desiring big butts.” 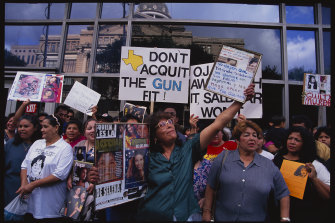 Selena fans congregate outside the courthouse in Houston, Texas during the slain singer’s murder trial.Credit:Getty Images

When they were holding auditions for the lead role in the 1997 Selena biopic, possessing the right body shape was essential. The actor who ended up landing the part would eventually launch a singing career of her own. Her name was Jennifer Lopez, and as Garcia says, “her butt became a central part of her identity”.

The hardest part of making the podcast was securing the rights to use Selena’s music, which were controlled by Selena’s father and former manager, Abraham Quintanilla, a man with a reputation for being fiercely protective of his daughter’s legacy. He said no to Garcia. She persisted. 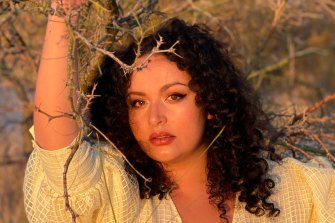 Maria Garcia, the podcaster behind Anything for Selena.Credit:

“When I met him, he seemed familiar to me,” Garcia says. “We had very similar working-class and cultural parallels. He could have been my uncle or my grandpa. I spoke his language and he appreciated that.”

He eventually said yes to both being interviewed and using Selena’s music.

Anything for Selena asks big questions about identity, race, politics and, yes, belonging. And at the centre is a woman who has become a symbol for many Latinx. It raises the question – what if Selena hadn’t been killed that night in 1995?

“I think she would be where Beyonce is now,” Garcia says. “At the start of Beyonce’s career she was very much under the wing of her father as far as her image and aesthetic, then we saw her emancipate herself and evolve. I believe we would have seen the same from Selena if she had lived. That’s when I feel so much loss. I think about what could have been.”