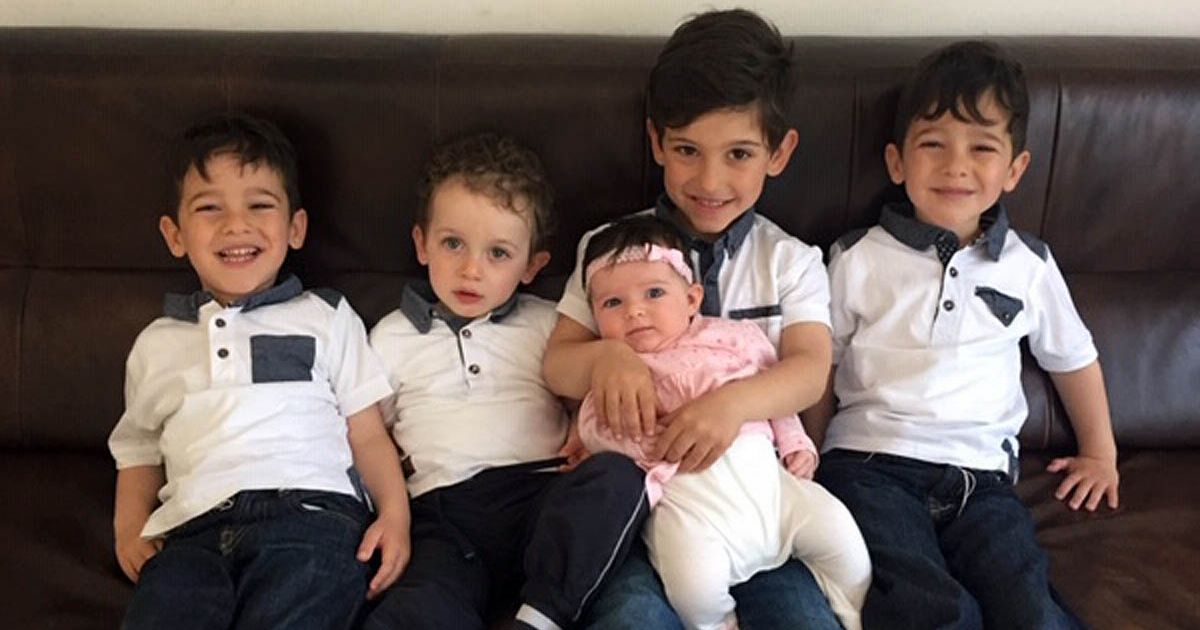 Seven weeks before they were due, Viviane Goldsmith's twin boys made a dramatic entrance into the world.

While the mum-of-five can laugh about it now, it harked the beginning of what's been a roller-coaster journey – the sort which perhaps only other parents of multiples can really relate to.

Viviane, 43, had just taken her eldest son, Zac, now eight, to his first nursery session and decided to go to the butchers.

She tells MirrorOnline: "I was bending down to pick up a chicken too, when a staff member decided to stack the shelf directly above my head and dropped two packets of chicken mince on my head and shoulder, that tipped me backwards and I started going into labour .

"I called my husband crying on the butchers floor and he came straight away.

"He called an ambulance and then started laughing, I couldn't understand why, but it was because the ambulance men were identical twins!

"They were amazing and I ended up having my boys that night/morning. We joked that we should have called them Bernard and Mathew!"

James and Harry, now seven, were kept in hospital for six long weeks- even, at one point, in separate hospitals – meaning by the time they were home with their family, Viviane was keen to get out with them and crack on with family life.

Ask any mum of multiples about one stand-out aspect of having twins, and the likelihood is they'll talk about the attention you receive when out and about.

Viviane and her boys were no exception. She adds: "However, I didn't mind, I had been on such a journey with them being premature, six weeks in hospital and at one point in different hospitals and I felt proud and happy to be able to now take them out."

As the proud mum reveals to MirrorOnline, the challenges for her (logistic and emotional) have been varied.

"I only always and still do feel bad to my other kids as my twins still get so much attention for being twins.

"However, my eldest is unique and special in his own way and my little two are ever so cute."

There have been other instances where the attention Vivian and her twins attracted caused mild upsets.

"Friends and family probably got more annoyed than me," she continues.

"If ever I met up with one of them for a coffee with my twins, they would be shocked about how many people spoke to me.

"I remember going with a friend for coffee who had a cute baby the same age as my twins, but everyone spoke to me about my twins and no one mentioned her baby. It was the last time she came went out for coffee with me."

Even during pregnancy, Viviane found out that life with twins presented unique challenges.

She reveals: "Having a twin pregnancy is far more difficult than a single one. Firstly, I was terribly sick until around 16 weeks. I use to have to put some toys on the floor in our bedroom, close the bedroom door and let Zac play on the floor whilst I lay in bed vomiting.

"It was awful. Thats how I knew I was having twins before my scan as I didn't have even one day sick when I was pregnant with Zac.

"The pregnancy was hard and as they shared one placenta it meant lots more additional scans.

"They also told me that I would need to have a c-section and that they would be born no later than 36 weeks. You do worry that extra bit more, the scans take that much longer and the pregnancy weight is heavier."

Then there are logistic questions at home which need to be addressed.

As Viviane explains, "There are lots of extra decisions to make, including the basics of who do you feed first, who do you change first or dress first.

"Do they dress in identical clothes/matching clothes or totally different clothes?  When they both wake up crying at the same time, who do you go to first?

"When they start nursery/school, should they be in the same class or different class? Who do you collect first? Should you do joint play dates?

"Should they share a bedroom? Should I call them 'twins' or by their names?

"As a parent, you want to try to be fair to all your kids and when you have twins there is more pressure to make sure you are treating them equally, giving them the same amount of individual time or time with a certain toy which you know they both like or even same portion sizes."

Despite Viviane's pride and delight when out with her boys, there were times when she really struggled, describing one instance:

"I had to get them weighed weekly, but there was this annoying rule at the local health centre that all prams had to be left outside for 'health and safety'.

"It was impossible for me with twins to leave their pram outside and take these tiny babies in to get undressed and weighed. The staff agreed that it was hard for me, but insisted that they were the rules.

"On a lucky day, a wonderful Health Visitor called Teresa saw me struggling and kindly agreed to come to my house every week and weigh my boys, which was a relief."

Over the years, she has also marvelled at their bond. But Viviane readily admits she's wondered how it's impacted her eldest son.

"I had Zac and then James and Harry and I always felt bad that Zac would be a sibling to identical twins who were also boys like him.

"I knew I wanted another child to balance our family and I was delighted when I had Daniel. Zac was so excited when Daniel was born and he told us that he now had his own best friend."

In spite of the love she had for her brood, the loss of her mum and the shattering news that her beloved sister had terminal cancer prompted a desire to have a little girl.

Viviane continues: "I got pregnant for the final time three months before my 40th. I announced my pregnancy at my 40th party. I gave birth to Victoria Jay, named after my mum and sister, six weeks before my sister passed away.

"I had five kids under the age of 6 and I always say that although they sometimes drive me insane, they also keep me sane and have ensured that I remain strong for them through such difficult times."

Viviane very much still feels the absence of her mum and sister, but the needs of everyday family life keep her more than busy – especially with her twins now modelling.

Of making this decision, she says: "It was a big decision for so many reasons. Firstly, I had to think about the impact on my other kids and in particular my eldest Zac.

Do you have a multiples? What's life like with them? We'd love to hear about it! You can email [email protected]

"I have asked Zac so many times whether he wants to try modelling and so far he has said it's not for him. I also had to think about the impact it would have on us as a family."

But it's a decision she doesn't regret.

She explains: "It boosts self esteem and confidence and my twins are very happy talking to adults and kids they have just met.

"It teaches them to accept rejection if they don't get a job after a casting and I hope that will go on to teach them determination to continue thriving for something later in life."

"As a parent of twins and as a parent of five young children, it's important for me to nurture avenues that they wish to take

"They are all totally different and but all equally special in their own way."