When Baxter Dury was a kid, his dad would go on tour and leave him in the care of the Sulphate Strangler, a giant, malodorous drug dealer prone to violence.

Sleeping on a rotting chaise longue in the front room of a damp Thames-side flat in Hammersmith, the boy would awake at all hours surrounded by the Strangler’s sleazy menagerie of closing-time companions. “Night chancers,” he would call them.

Baxter’s father was Ian Dury, the Essex new waver who sang and lived the hedonist’s holy trinity: Sex and Drugs and Rock and Roll. Night Chancers is the title of Baxter’s seventh album.

“You grow stronger, don’t you, out of the ashes,” he says today, a greying man of 50, a half-smile playing under huge sad eyes. 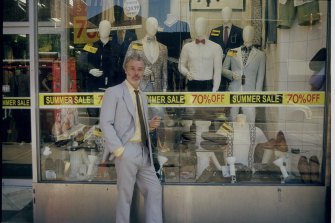 Baxter Dury: ‘Dad was quite a dominant figure.’

He’s Zoom-ing in from that same Hammersmith flat where he learned, to quote his new memoir, Chaise Longue, that “booze, money and drugs feel so good when you are 14”. It’s probably had a lick of paint since the geezer who sang Hit Me With Your Rhythm Stick succumbed to cancer in 2000.

Baxter released his first album two years later: a minimalist suite of vaguely grotesque character sketches titled Len Parrot’s Memorial Lift. He roped in some of his dad’s old band, the Blockheads, plus members of Pulp and Portishead, but his nervy falsetto seemed designed to distance him from his old man’s gruff bark.

Music was “not an obvious choice, because Dad was quite a dominant figure and that’s what he did,” he says. “Also it felt potentially a little bit cheesy. Music heritage is quite flawed, traditionally, so I was being careful.” 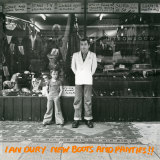 Baxter Dury with his father on the cover of the 1977 album, New Boots And Panties!!

His penchant for outsider characters is “an interesting way of writing songs via a kind of theatrical, storytelling perspective; sort of inventing someone’s view,” he says. “It also deflects from being too personal, I guess. So it might be a way of laundering some of your more personal thoughts.

“A lot of the time, people grow up in a crazy environment and they merge into it, they become it. Whereas I still had some sort of separation, maybe from having dual parenting … Not everybody was crazy.”

Baxter’s parents split just after he was born, but they remained close. Hence his childhood oscillating between the insanity of the rock’n’roll life — that’s him, aged six, with his dad on the cover of the New Boots and Panties!! album — and the more stable Chiswick art retreat of his mother, Betty Rathnell.

Behind him as he speaks are paintings by both parents and their old teacher Peter Blake, perhaps best known for the Sgt Pepper album cover he designed where they met at London’s Royal College of Art. “Everyone painted,” Baxter says. “I think we were four generations at Royal College of Art.”

Street art, a key part of the dawning culture of hip-hop, was more Baxter’s speed growing up. The first time he appeared on stage was in response to his father’s drunken demand that he and his friends “f—ing breakdance!” at the Hammersmith Odeon.

“I’m really into hip-hop but you can’t appropriate that clumsily because you look like a twat,” he says of his musical style, which has morphed since that falsetto debut into a Serge Gainsbourg-esque blend of dry cockney murmur, lush strings and female choruses. “I try and shift it around a bit. I mean, I’ve always got the same monotone personality throughout the musical shifts. I don’t change, because I’m not a great, versatile singer.”

What he is, for better and worse, is Ian Dury’s son. He makes no bones about that fact opening doors to his musical career. And whatever madness he endured in the care of the Sulphate Strangler is rightfully his to mine forever.

“I think writing that book made me able to look at my upbringing properly and think, ‘oh, what a great experience. What fun’. I mean, I actually thought my parents were amazing when I wrote that book. I thought, how lucky am I?

“There’s other versions of that lifestyle and they don’t have much light to them. And I had a lot of light. Brilliant. I don’t regret it at all. And I can sort of monetise it, which is great.”

Baxter Dury plays the Sydney Metro on June 4 and the Forum Theatre, Melbourne, on June 7