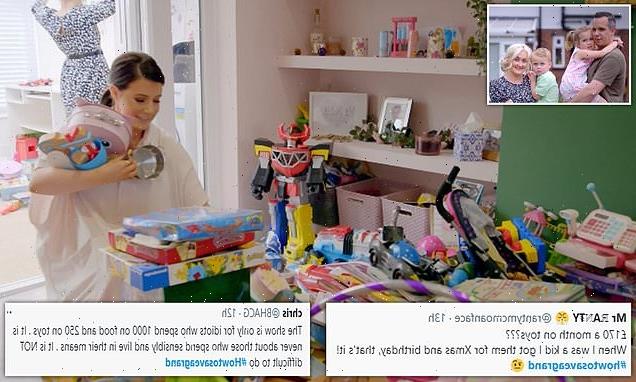 Viewers of How to Save a Grand in 24 Hours have slammed a couple who splashed out £170 a month on toys for their ‘fussy’ children.

Natalie and her shopaholic husband Karl, from Surrey, appeared on the Channel 4 documentary last night and confessed they were routine overspenders, spending £1,000 a month on food and over £500 on birthday gifts.

With the help of Channel 4’s team of chef Gary Usher, DIY expert Eve Humphreys and cleaning wonder Peachy Clean, they discovered they could be saving over £1,110 a month by cutting down their food bills and excessive shopping sprees.

However many of those watching the show were left flabbergasted over the couple’s spending habits, with one writing: ‘£170 a month on toys??? When I was a kid, I got them for Xmas and birthday, that’s it!’ 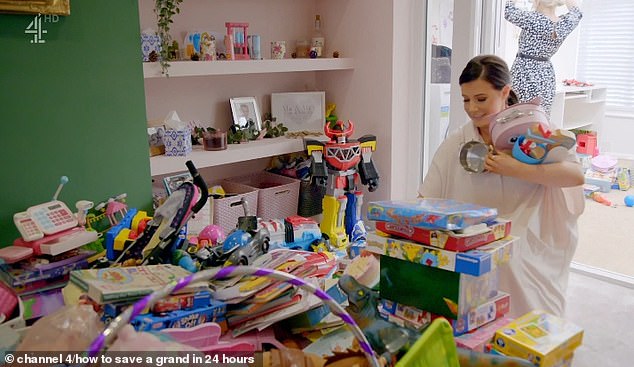 Viewers of How to Save a Grand in 24 Hours have slammed Natalie and her shopaholic husband Karl, from Surrey, who splashed out £170 a month on toys for their ‘fussy’ children (pictured, their enormous pile of presents in their home)

Another wrote: ‘Lots of talk on #HowToSaveAGrand about buying fewer toys and selling unused toys, nothing on helping parents understand they don’t *need* toys to build memories with their children.’

Appearing on the programme, the self employed beautician and electrician confessed they had had to make drastic cuts after the pandemic hit.

Natalie said: ‘To be told you can’t work anymore was a massive shock.’

To save money, the beautician began working from home but that meant sacrificing one of the children’s bedrooms and the family even sharing a bathroom with clients during appointments. 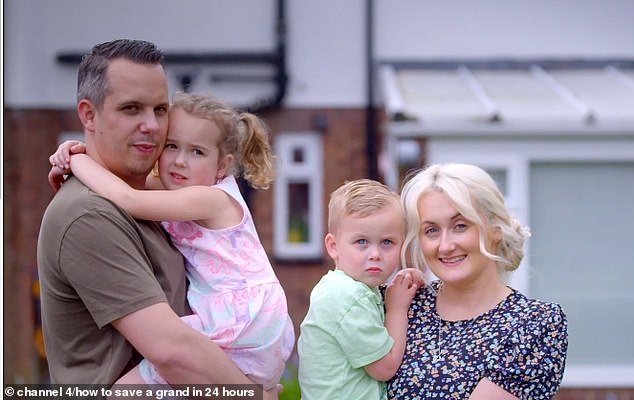 Natalie and Karl appeared on the Channel 4 documentary last night with their children Elle, six, and Laurie, three, and confessed they were routine overspenders

Natalie confessed that in an ideal world, she dreamed of having a home studio at the back of the garden.

But to afford the salon, the duo had to trim their treat spending, especially shopaholic father Karl.

Host Anna Richardson called him a ‘splurge spender’ who ‘loved to spoil his kids’, while Karl confessed: ‘I lost my dad when I was very young so I try to do everything I can while I am here.

‘We do everything for the children. Nothing is for us, we’ve had our life and we’re married.’ 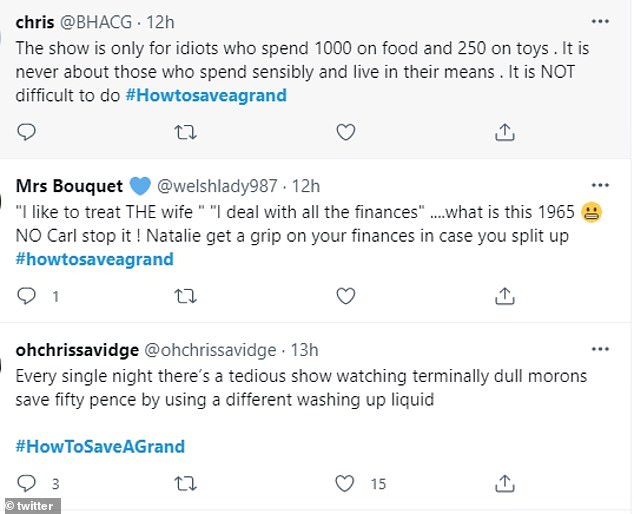 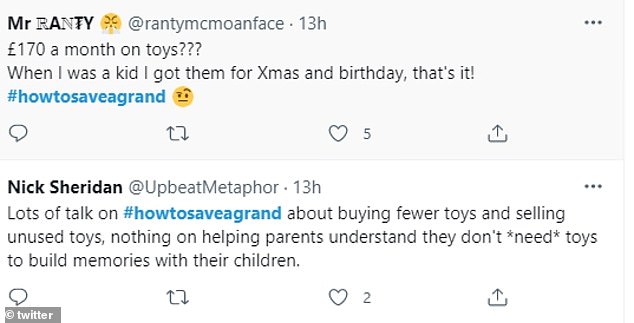 Many viewers were left horrified by the couple’s extreme spending habits, branding them ‘morons’

But weekly treats from a doting dad were hitting them in the pocket and causing chaos in their playroom.

Natalie said the children Elle, six, and Laurie, three, were ‘fussy’ while big spender Karl also admitting he wasn’t keen on make do and mend, adding: ‘I’d rather pay someone to do it for me.’

Karl said he was often tempted to spoil his children, explaining: ‘When I was growing up we didn’t have much money, so we didn’t have the new things.’

Meanwhile Anna revealed Karl needs to ‘rein it’ and had spent nearly £1,000 on non-essentials the previous month. 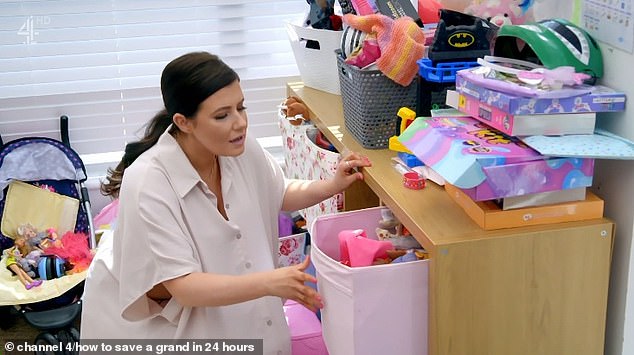 Welsh-wonder Peachy Clean went in to tackle the playroom, where she found mountains of toys and games

She stunned the pair when she revealed he had spent £540 on Natalie’s birthday presents.

Welsh-wonder Peachy Clean went in to tackle the playroom, where  she found mountains of toys and games.

Peachy said: ‘I can’t believe that two children have got this amount of toys. It was like a toy mountain.’

Natalie admitted: ‘I think it was a bit overwhelming when it was all laid out, but now it looks so much better.’

The couple ended up clearing out their playroom and selling spare toys and games online to make some extra money. 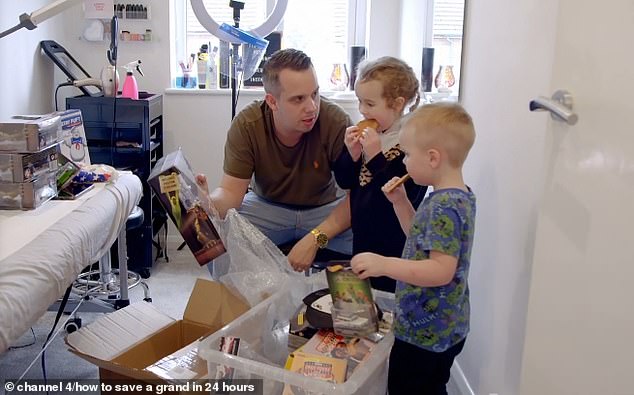 A week later, and Anna returned to see if Karl and Natalie had been able to save some cash from the experience.

Anna revealed the couple hadn’t spent a penny on non-essential items, saving £430, with Karl saying: ‘This is what I want to do now, save money.’

Meanwhile Natalie had also taken stock of the household bills, and they slashed their supermarket spend, reducing their food-bill by £620.

The couple also managed to cut their subscriptions down, saving £110 per month.

However viewers admitted they were baffled by the couple’s spending habits, with one commenting:  ‘The show is only for idiots who spend £1,000 on food and £250 on toys.

‘It is never about those who spend sensibly and live in their means. It is NOT difficult to do.’

Another wrote: ‘Every single night, there’s a tedious show watching terminally dull morons save fifty pence by using a different washing up liquid.’