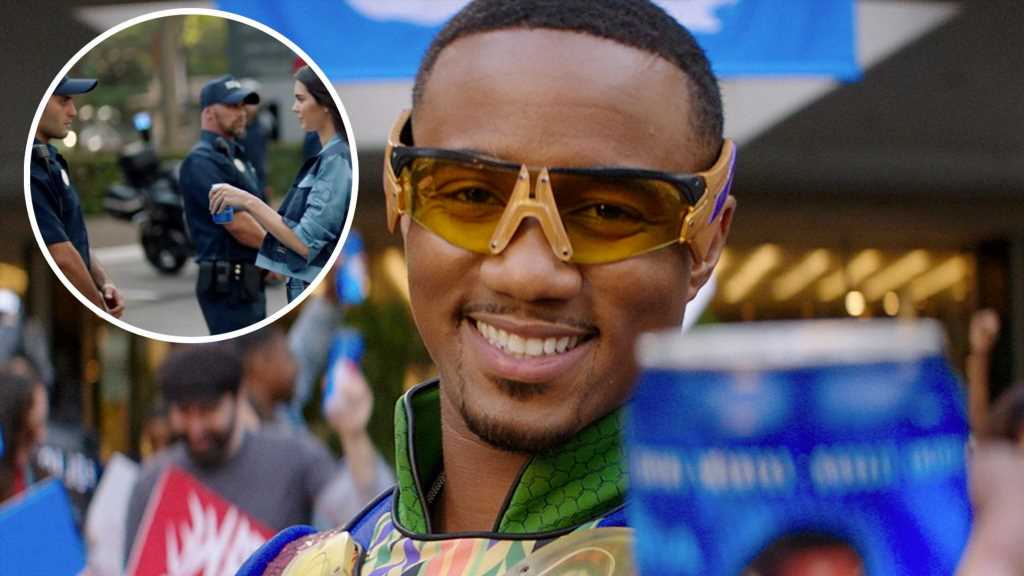 A-Train's energy drink was the stand-in for Pepsi in the faux ad.

“The Boys” took aim at Kendall Jenner’s misguided Pepsi ad on the latest episode of the Prime Video series.

On Friday’s new hour, A-Train (Jessie T. Usher) continued his mission to rebrand himself as a Black superhero in touch with his roots by participating in a tone deaf ad campaign for his Turbo Rush energy drink.

After voicing his frustrations with Blue Hawk — a superhero who has been over-patrolling Black neighborhoods — to Ashley (Colby Minifie), she exclaimed that “social justice is so important” to Vought. “Black Lives Matter is my favorite hashtag. My Insta? Nothing but black screens,” she said, before telling him that his new look is what “inspired” their new campaign.

With that, the new ad was shown in full.

In it, the supe was seen walking out of a shoot to join a protest on the street. “This is important,” he told his handlers, before joining the throng of people holding vague signs reading things like “Peace” and “Unity.” Amid closeups of his energy drink, A-Train was getting between a protestor and a line of NYPD patrolmen in riot gear, before handing the police one of his beverages.

The police then started to party with the protestors, as A-Train looked into camera and said, “We gotta listen to each other. A-Train’s Turbo Rush Energy Drink.”

Some of the faux ad can be seen in the Season 3 trailer below, around the :28 mark:

The ad is a near copy of one Kendall Jenner participated in back in 2017.

In the original spot (below), the model was seen walking out on a photoshoot to participate in a protest. After grabbing a cool can of Pepsi, she approached a line of police and handed it to one of them. The crowd erupted into cheers as he took a sip, as if that one sip solved all the world’s problems.

The ad ended with the copy, “Live Bolder, Live Louder, Live for Now” — and was torn apart at the time and quickly pulled by the beverage company. The spot was accused of appropriating the Black Lives Matter movement to sell a few cans of soda, and critics were extremely vocal over social media.

“Pepsi was trying to project a message of unity, peace and understanding. Clearly, we missed the mark, and we apologize,” they said in a statement at the time. “We did not intend to make light of any serious issue. We are pulling the content and halting any further rollout. We also apologize for putting Kendall Jenner in this position.”

“The Boys” Season 3 is streaming now on Prime Video.