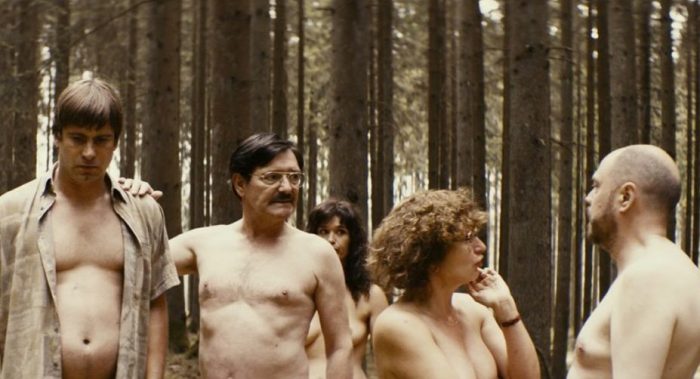 Sometimes the more you look for something the less chance you have of finding it. “If you really want something you have to try to not want it so much,” says director Tim Mielants, describing how his character Patrick finally cracks the case of his missing favorite hammer.

The zen exercise doesn’t just work for the obsessive lead character in his debut feature of the same name. It was essentially what allowed the director to finally shoot the story that had preoccupied him since his youth in Belgium.

Mielants, a veteran director of small-screen series such as “Peaky Blinders” and “Legion,” says he was trying too hard to break into film for years before finally finding his way to the realization of “Patrick,” competing at Karlovy Vary for the Crystal Globe.

“I came to television just to put bread on the table,” he says, “and in a way in television, I failed my way up and that’s actually how it all turned out.”

The offbeat story, set in a nudist camp in the mid-80s, is not really about nudism, Mielants says. The germ of “Patrick” was planted in an experience the director had as a kid, he says.

“This idea is more than 30 years old. My parents took me to a nudist camp back in the 80s and what I saw there stayed with me ever since. It was managed by a mother and a son, and the mother was blind and she didn’t know that everyone was walking around naked. And there were like terrorist organizations operating from there.”

Convincing his actors, including Kiwi thesp Jemaine Clement (“What We Do in the Shadows,” “Legion”), to bare all proved easier than Mielants was expecting, he confesses.

“Actually I was worried about it but nobody said no to the project because they’d be naked. The other way around – Pierre Bokma, who is like the Marlon Brando of the Netherlands, said, ‘Well, Tim, I’m gonna do it because it’s naked. Otherwise I wouldn’t.’”

Despite the challenges in funding a story like “Patrick,” Mielants says, the idea just wouldn’t let him off the hook.

“It stayed with me for a long, long time. It never left me. And I was doing interviews with people who went there back in the day and I was collecting a lot of ideas.”

The nudity was an element in that world he couldn’t escape either, Mielants says, but recalls it as “always quite normal.”

“I felt I wouldn’t be truthful if not using the nudity because that was something that stood out and that was special about the mysterious atmosphere. The stories I saw there, the people, the characters that were kind of mysterious and special and bizarre. It just made and extreme, big impression on me.”

The cast got on the same page surprisingly quickly, the director says.

“I think all the actors felt it wasn’t about the nudity. It was trying to tell another story. Actually, we all considered it a costume drama. Costume dramas are actually never interesting because of the costumes.”

What’s at the core, really, is Patrick’s way of handling the loss of his father, Mielants says. “The story I wanted to tell is actually about grief.”

Patrick, in obsessing about finding his missing hammer, “is trying to avoid that pain,” the director says. “Sometimes during grief we start asking ourselves questions. What do we want to do in life? Where is this going? What am I doing? These deeper existential questions.”

As camp visitors ask Patrick similarly awkward questions (“Do you want to stay here forever?”), the socially awkward maintenance man “is going through these five stages of grief told by searching for his hammer.”

As he does, the bizarre quotient steadily escalates – as do the laughs. Without realizing it, says Mielants, he made “Patrick” as a “slow comedy.”

That’s how Clement described the script, using a term Mielants had never heard. “He said it’s comedy without punchlines.”

After mulling that explanation for a bit, the director says, he decided he was just fine with that description.