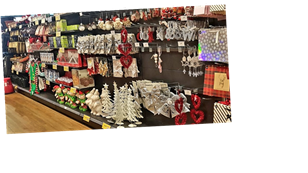 The countdown to Christmas is officially on.

Even though 106 days may feel like a long time to wait until the big day, supermarkets are already making their preparations for the festive season.

On Twitter, shoppers revealed their surprise at seeing Yuletide stock on shelves.

Home Bargains is one of the places where you can pick up Christmassy gifts, wrapping and decorations at the moment.

One social media user revealed: “The staff in Home Bargains were busy putting out the Christmas stock today.”

And another shared a picture of chocolatey gift boxes, adding: “Christmas has come to Home Bargains.”

It’s not just Home Bargains that is getting into the festive spirit.

Tesco had laid out some of its Christmas goods too.

These include foodie gifts, like a doughnut making kit, hot sauce line-up and mugs that would make great secret Santa presents.

Customers seemed chuffed by the new additions, with one writing: “Christmas stuff is out in Tesco already and you bet I got excited like a little kid”.

And a second said: “Tesco Christmas comes early. Just in case #year2020 decides to have a go at that as well.”

One Twitter user shared a picture of a load of tinsel and ribbons, gushing: “Only 120 days until Christmas.

Another wrote: “I saw so many festive items in B&M and it’s making me SO excited for Christmas.”

And a third added: “B&M have Christmas wrapping paper, decorations and gifts out on shelves… I am bloody excited.”

While many appreciate the early start to the festive season, others have tweeted at shops to “calm down”.

One Twitter user wrote: “Oi @Tesco you need to calm down. This is too early for Christmas stockpiling.”

Another said: “Had a bit of a Victor Meldrew moment in B&M this morning.

“Don’t know why this came as a surprise though because if I remember rightly the same thing happened last August. But Christmas?!?”

And a third added: “Just nipped into Home Bargains and they have an aisle full of Christmas decorations and cards?

“Omg not even had Halloween yet!!!”

So is it too early to start preparing for Christmas? Share your thoughts in the comments section below.